Nashville SC lived on the touchlines in Ottawa Fury’s offensive third over the weekend. That played a big role in allowing the Boys in Gold to come away with a 3-0 victory.

Why did it happen that way? We go to the film.

I’ll begin with a look at Ottawa Fury’s formation: while they listed it as a 4-3-3, it played out like a 4-4-2 diamond (aka 4-diamond-2). In that formation, you either strand your central defensive midfielder – which you can do if he’s got the Michael Bradley-esque ability to bang those long diagonal passes – or in giving him help, you open up major territory for the opponent to exploit. 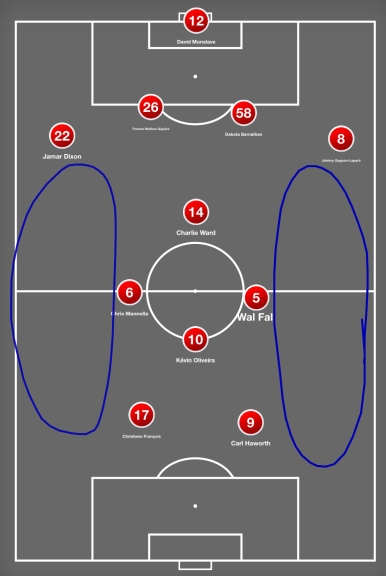 As you can see, either Ward doesn’t have nearby passing options, or the Fury have to pinch in their “wide” midfielders, opening up a ton of space on the flanks. The diamond midfield – and more generally but less universally, 4-4-2 formations – has largely gone out of style because of this problem in spacing (and if that central defensive midfielder is not a great stopper and quite athletic – what Michael Bradley has lost in recent years – you can get countered on pretty quickly).

To make up for those deficiencies, Ottawa pushed up the fullbacks – as you essentially must do unless Ward is a total baller.

The fullbacks either stay wide to provide the width (which is what Ottawa did), or they pinch in a bit more and the wide midfielders get high up the field to make the width relevant in the offensive third. As you can see, there’s a ton of space in behind.

All of those spacing issues also apply on the offensive side of the ball when the Boys in Gold were progressing it forward: the Fury had to sacrifice numbers somewhere to get width elsewhere, or gave up their width to make sure they had numbers. That’s what Nashville was able to exploit.

I’m nothing if not literal:

I like this one a lot because it demonstrates that Nashville probably had a few specific ball-movement patterns scripted to get into the space they wanted. You can see Lebo Moloto wave Justin Davis forward, then when Davis moves the ball to Matt LaGrassa, he’s able to one-touch it in to Moloto in the space that NSC knows is going to be there.

The fullback run from Davis finds all sorts of space, even against a packed-in Fury, because they’re worried about handling Nashville’s midfielders and strikers with Ottawa’s own striker pairing and No. 10 caught upfield with only NSC’s central defenders in front of them (making an 8-on-7 advantage for the Boys in Gold).

Here is the space Nashville knows is going to be there, and Michael Reed first-timing a pass into that area. Even though Moloto doesn’t make the most of it (the defender catches up to him, and then tackles the attempted cutback), it shows the availability.

Defensive confusion for Ottawa as their “width/compactness” communication doesn’t work out, and Taylor Washington takes the space.

He knows the space is going to be there (see the above), but really nice awareness and then vision from Matt LaGrassa to look up, prepare his body to first-time the pass, and then bang it accurately. His long passing and vision have been underrated – including by me – to this point.

It also helps on the re-press

Nashville SC sat back much more in this game than they had in the first three – for the reasons you see above, in that Ottawa was set up to let counters shred them – but they were also able to pick spots to pressure after a giveaway.

Thanks to Ottawa’s poor shape to deal with Nashville’s 4-4-2, they were unable to get the ball out of their own end in some of those situations. See?

Michael Reed’s cutback pass is intercepted, but he stays on the player, and Nashville’s numbers out wide eventually cause a freakout and the ball being thrown away.

I’m not confident that Nashville will go with a 4-4-2 all the time, but certainly this was a game in which that formation was able to best exploit the weaknesses of the opponent. Their two wide midfielders (Kharlton Belmar and Lebo Moloto) had all sorts of space, Tucker Humer and Daniel Ríos still had room of their own in the box despite that, and Matt LaGrassa and Michael Reed had the ability to shut down the central midfielders for Ottawa (who naturally have a tough time linking between themselves, with the No. 10 having both Reed and LaGrassa in a marking position), while contributing offensively.

Most teams won’t give up that amount of space – or at least in doing so won’t also give up a bunch of free roaming territory to both strikers and the weakside wide midfielder – and that’s where you like to see a third central midfielder (preferably an offensive-minded one) in there to make sure the team can control the center of the pitch – obviously they didn’t have any trouble with that against the diamond Saturday.

I would still like to see two-striker formations occasionally (though I’ve discussed some weaknesses above, and have previously broken down weaknesses of other 4-4-2 alignments), but perhaps Cameron Lancaster playing underneath Ríos to give more contact with the wingers and the central midfield in a 4-2-3-1, rather than a pure 4-4-2. Largely, given that both of the MLS-bound strikers have had their share of injury troubles in the past (Lancaster over the course of his entire career, Ríos more specific to the past season and offseason), a 4-2-3-1 with one replacing the other off the bench gives NSC a ton of late-game firepower and helps keep both of them healthy.

As the winger depth gets up to speed (Moloto and Ropapa Mensah’s full-game fitness to run the touchline in a wide formation was a problem in the first handful of games, but they’re getting up to 90-minute fitness, while Alan Winn’s concussion meant only one pure winger – Belmar – was healthy), there are more options to tinker with up top.