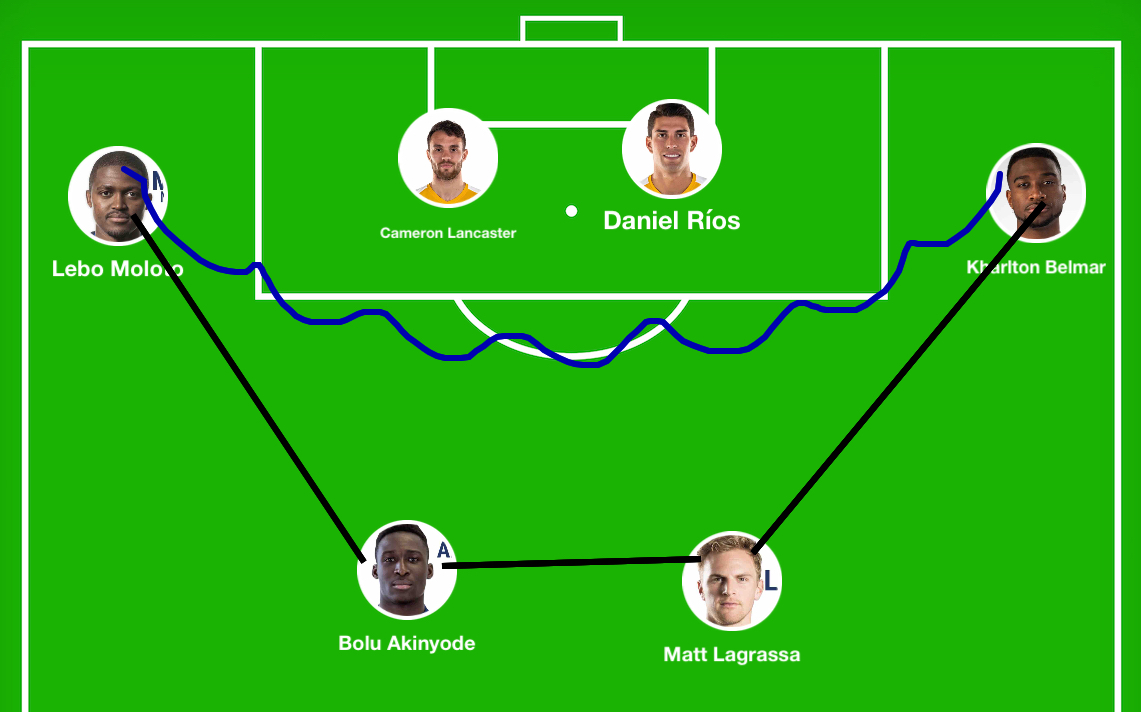 How did Saturday night’s disappointing loss to Saint Louis FC come about? Herein I mine the Opta data for some answers and insights.

Nashville SC made two massive signings this offseason from a goal-scoring perspective. Indeed, both strikers – Cameron Lancaster, the league’s single-season goal record-holder, and Daniel Ríos, who was second to Lancaster in regular-season scoring last year – got on board in the team’s first game of the season.

Not so much Saturday, and the duo was hardly threatening on an every-possession basis. Part of that revolved around an inability to get Lancaster the ball in dangerous areas. Behold, the touchmap you definitely don’t want for a goal-getting striker!

Part of this can be explained away in a single fact: he’s playing out of position. Lancaster played both left and right wings (more about that switching in a moment), as well as at the No. 10 role in a three-man offensive midfield. At the end of the first half and for much of the beginning portion of the second, he was also a traditional side-by-side striker along with Ríos (though I’d contend that is probably even less effective, again, more in a moment).

That’s not because the coach wants him to play a different role than he always has. It’s because Nashville doesn’t have anyone to play as the second winger in a 4-2-3-1 formation: Ropapa Mensah is not up to game fitness after the preseason, and Alan Winn went out with a concussion in the final friendly before the games started counting. Additionally, Lebo Moloto – who can fill in at wing (and did at times in this one) – doesn’t yet have the stamina built up to run the wide channels for 90 minutes, because he suffered a knee injury last season, wasn’t out of a knee brace by the time the year concluded in mid-October, and wasn’t able to work on fitness at full-go until he arrived in preseason camp. Based on the substitution patterns to date, the only

That’s a worst-case scenario (though the Mensah and Moloto situations were predictable) that Gary Smith is trying to make the best of until Winn returns. You could certainly say – and I did – that midfield depth could have been added earlier, particularly among wide players, but at this point, suffering through the first two games and winning one of them probably isn’t the worst thing in the world.

Another game, another outing without a goal or assist for the other high-profile offseason signing, Kharlton Belmar. He was still awesome though! I get the impression I’m going to be King of the Kharlton Belmar Fanclub until one of these plays actually results in something (at which point I’ll cede my crown to the next deserving citizen), but it’s only a matter of time before he finds that breakout.

Take a look at the reel of his dribbles I included in yesterday’s GIFs post:

That’s… it’s nice. You’ll also note that he’s on the right side in two clips, and the left in the other. That versatility is something I liked out of Ryan James last year, and if you take that same two-sided ability with… uh… better technical and athletic gifts? (I don’t like to say it that way because it sounds mean-spirited toward James, but that’s certainly not my intent) you get a guy whose production will show on the scoreboard soon.

He began the game on his more natural right foot (allowing him to cross with his strong side), and around the 30th minute, flipped to the left side, where he’s been most comfortable over the years because it gives him the angle to cut-in and shoot with his right. Here’s his touchmap as the game played out:

When there’s additional width provided by a true winger on the other side, he should have more openings when it comes to passing and/or shooting lanes.

Thanks to the personnel deficiencies described above, Gary Smith switched to more traditional 4-4-2 tactics at the end of the first half into the second, but that didn’t work out well. Indeed, that formation – when the coach wants two defensive midfielders, as Gary Smith should and does – forces the team into a bunch of crossing in attempt to find the strikers’ heads.

Bob Bradley as USMNT manager was derided for his “empty bucket” tactics when using a 4-4-2. Here’s why it’s called that:

Access to the strikers is fairly easy to cut off when a team doesn’t have penetrating passing from the defensive midfield (likely a reason Bolu Akinyode was taken off for Michael Reed – there needs to be some threat of either DM making a run into the box to prevent packline defense), and it’s going to result in a lot of crossing or hopeful long balls and direct play from the back. It also will result in plenty of “possession without purpose,” and Nashville’s 74.7%-25.3% mark after the break speaks to that, to some degree.

Penn FC coach Raoul Voss tried to insult Smith last year by saying Nashville only builds this way, and putting it down as “English football” (with the implication that it goes back to the unsophisticated tactical days before the influx of coaches and players from his native Germany, among other places). Smith doesn’t prefer to play this way unless forced into it – which unfortunately has been the case not only in this game, but for stretches of last year without goal-getting strikers – and also beat Voss’s team 3-1 in the game after that quote.

ANYWAY, that little tangent aside, that’s why the more modern tactical approach is to sink one of those strikers into a No. 10 role, opening up more paths to get it into the box with passes, rather than crosses. Unfortunately, with the depth situation on the wing, that wasn’t an option as NSC tried to put its two best scorers in position to get a hopeful goal.

That’s a big part of why you saw an abandonment of the key offensive area known as “zone 14” (the area between those CDMs and the water level in the beautiful artwork above). 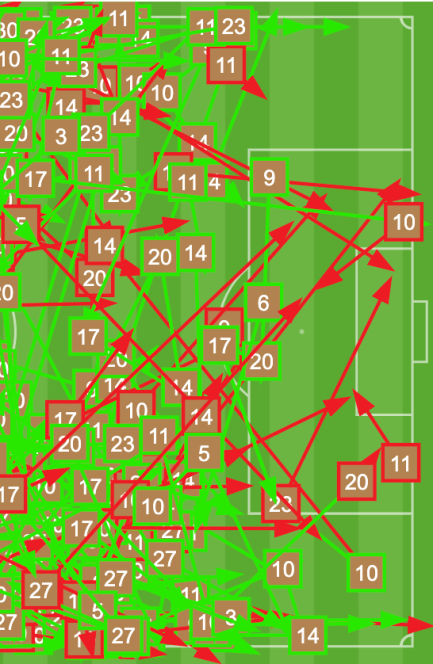 There are certainly more attempted entries into the offensive box by passing than crossing, but none from that dangerous area, and that’s a matter of trying to force the two strikers onto the field together out of necessity. Essentially, it appears Gary Smith saw he couldn’t produce offense with Moloto and Lancaster alternating with each other at the wing and No. 10 spots, and said “welp, time to play ugly to change the outcome.”

All of this combined to make life easier on the Saint Louis defense: they could play relatively conservatively and simply focus on preventing Nashville’s aerial threats from getting the ball, while the centerbacks barely had to leave home.

Take a look at the heatmap of Nashville’s central defenders (Liam Doyle and Ken Tribbett) on the left, and compared to Saint Louis FC’s Sam Fink and Phanuel Kavita on the right:

NSC’s are much higher, and much wider. Even with Kavita’s tendency to carry the ball forward out of trouble (forced by the Nashville high press, to a large extent), there’s much more narrowness overall, and you can be certain it’d be even more stark if I could filter for defensive postures only.

For all the offseason talk (which was wrong, based on uninformed but very loudly-spoken analysis) that Gary Smith doesn’t want to score the ball, this is a counter-argument to that: even from the back, his team was more aggressive and tried to be pro-active. Not doing it on a given day for a multitude of reasons speaks to result, not intent.

And so, with all that said, what’s the difference-maker when a game devolves into a defensive battle? Set pieces. Nashville had more of them, was unable to convert, and saw a late second-opportunity set piece fall for the opponent. 1-0 St. Louis.

I’ve seen in the aftermath of the game that there was some triumph of wills – one team wanted it and therefore won, the other team did not want it and therefore lost – but that’s not an accurate narrative for this game (and verrrrrrrry rarely is an accurate narrative in any sporting contest: the team that plays better wins, and not because they showed more heart or whatever).

Nashville essentially bossed the game, and even earned four times as many of the type of play as Saint Louis scored on as their opponent. When a game is close enough to come to a 1-0 scoreline, there’s an element of luck involved, and while you certainly can’t discount the talent and effort of Saint Louis FC’s team, it happened Saturday.