Nashville SC went on the road over the weekend and earned one of the biggest away wins in franchise history. What went into that victory? Let’s to go the Opta data to find out.

Read that heading twice, because you’ll typically see it listed the other way (including once from me already this season). Plenty of teams possess a ton of the ball but can’t do much with it. Nashville was afflicted thusly against Saint Louis FC.

They turned the tables on Ottawa, though, ceding possession without allowing the Fury many serious offensive chances. Take a look at the opponents’ passing and touchmaps: 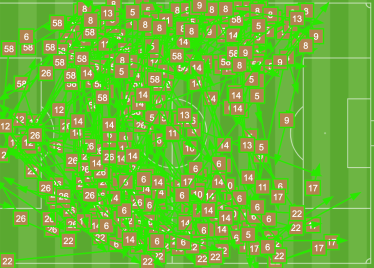 They’re going left-to-right there. Not only did they not get much of the ball in the desired “Zone 14” (at the top of the center of the box about halfway up to midfield), but they hardly touched it in the center part of the pitch anywhere past their own defensive end of the center circle. When you take into account that Nashville scored three goals, the majority of touches inside the circle came from kickoffs, too.

Ottawa was the team that got a lot of the ball – 65%-35% in their favor – but couldn’t do anything with it, with Nashville’s strategy to force them to carry the ball into the offensive third from wide positions paying off. The Boys in Gold didn’t even bother with their typical press, as you can see from their map of defensive actions:

It also paid off on the other end, because it forced the Fury to extend up the field in wide positions, while NSC managed to get in behind up the wings.

Ottawa nominally came out in a 4-3-3 formation: four defenders, three midfielders, and three forwards. Typically with that type of formation, you see a couple different things.

Ottawa didn’t do either of those things. Take a look at how they listed their lineup versus how it actually played out (they’re in brown):

Oliveira sunk back to be a No. 10, and they really played with two players advanced into striker positions. In practical terms, that played out more like a 4-diamond-2 than a 4-3-3. Here, you can see the weakness of having two center forwards: the numbers in the midfield are hard to work out.

It’s a hard formation to play if you don’t have elite talent at both central midfield positions, or a strong enough set of defenders to allow those fullbacks to push high. With only four midfielders and two of them occupying the same vertical channel, 1) there’s not much width to your formation in the midfield (the “wide” midfielders have to stay narrow to give passing options to the No. 6 and No. 10), 2) you strand the central guys as the wide players stay too far apart to create spacing, or 3) you give up opportunities at the back as your fullbacks have to push forward to create that width.

Ottawa certainly didn’t suffer too much from the first of those three factors, but they were completely destroyed in Nos. 2 and 3.

That is where Nashville’s switch from a USL-standard 4-2-3-1 to a 4-4-2 (a look they’ve trotted out situationally, but not as a primary choice) paid off: Michael Reed and Matt LaGrassa were able to (easily) control the center of the pitch against Ward as Wall and Mannella pushed higher and wider to try to create spacing. The fullbacks pushed up to try to fill some of that space.

Meanwhile, Nashville had the opportunity to send offensive-minded wingers in behind, and given that the fullbacks were often nowhere to be found, there were crosses or passes available. The crosses that availed themselves were set up for more success (with fewer numbers at the back for Ottawa) than typical as well, especially given the talents of Tucker Hume and Daniel Ríos to interplay with each other.

Only five unsuccessful open play crosses, four successful ones – Nashville is typically more like a 15-25% crossing accuracy team – is pretty impressive to begin with. A day when you hit more than half your crosses may be a day that you have Tucker Hume in the middle, but it’s also a day when you’re picking your spots wisely and passing accurately.

There’s also something to be said for the heavy volume of traditional passes from the flanks, as well. Taylor Washington’s No. 23 was well represented here, but he played only 18 minutes as a substitute at the left midfield.You can also see where Lebo Moloto, Reed, and Ríos played it from the left side as well, and Kosuke Kimura and Kharlton Belmar from the right.

This is probably not a tactical choice that’s going to be effective in every game – I’ve previously discussed why the flat four has its share of challenges – but certainly as a change of pace it works well, and when the service from the wings is good (it’s worth noting that Moloto’s legs are getting under him enough that he was able to play 78 minutes without having to tuck inside to rest the legs a bit), it’s effective.

With Moloto and Ropapa Mensah closer to full-match fitness and presumably both Ríos and Cameron Lancaster able to be on the field (Lancaster was out with a minor injury Saturday), it can be more than just a change-up, even if Gary Smith wants to be a little more fluid with that front-four personnel.