Triple-wrap, y’all. This is The Wrap, wherein I round up content both from this space and abroad about Nashville SC’s latest games.

Since I combined three games into one GIFs post, find moving images from wins over Charlotte and Charleston and the loss to NYRBII here.

The tension left the scoreline pretty early in the second half, but remained manifest on the field, with high tempers flaring after Alan Winn was brought down in the box to earn a penalty. Martinez would ultimately receive his yellow card for arguing the call. When the penalty area was cleared, Ríos finally stepped to the spot and sent Charlotte keeper Brandon Miller the wrong way, and rolled the ball into the bottom-left corner to provide the winning goal with 56 minutes showing on the clock.

The game column with quotes provided by NSC media relations:

For Belmar, getting onto the scoreboard was particularly cathartic. After scoring 10 goals on 45 shots for Swope Park Rangers last year, Saturday’s goal was just his second (on 21 shots) for Nashville SC. He’s also seen a step back in assists, with six last year and just two so far in 2019.

Finding twine in a high-scoring game for his team could be just what he needs to find a groove as the season enters its stretch run.

“I have noticed that it just hasn’t quite been my year, and that’s part of it,” he said. “A couple things just have not gone my way, and it’s kind of been tough to watch that happen, but I have to be a pro and continue to try and get opportunities and get in front of the goal and try to make them go in.

There’s also something to be said for Nashville’s willingness to possess the ball rather than try to score once the lead was extended to 3-1. Here’s the NSC-only heat map after Kharlton Belmar’s goal made the lead insurmountable midway through the second half:

A lot of possession still, but extremely content to sit deep and pass it around the back just a bit.

…and the Film Room broke down how Nashville SC was able to work some short-corner magic and open the scoring:

Angking overreacts to… well, everything (not necessarily his fault: as noted above, he’s put on an island with two guys to defend, and he tries to get on his motor to defend both of them). Importantly, when Washington passes back to Moloto – as per the design of the play – both Angking and Herrera (who leaves the front post and therefore abandons the box to match up numbers) go for Moloto.

The voting post for the Community Ratings, and your results:

Gonna be honest, while I do appreciate and encourage comments along with the scores, not having any to include makes writing up this part of The Wrap go much faster.

The halftime reset and game story:

Center official Jon Freemon overruled his linesman – who was standing just feet away from the play in question – and issued a second yellow card to Nashville SC defender Forrest Lasso in the 65th minute.

With Lasso out of the game, Nashville’s third and final substitution was necessary to bring on centerback Bradley Bourgeois, removing winger Alan Winn from the contest. With their captain sent off and their best offensive threat forced to the bench, the steam went out of the sails for the Boys in Gold.

Video and transcript from the postgame press conference, and the game column with quotes therefrom:

“I didn’t see the replay actually. Everyone tells me that it was very harsh,” Smith said. “I’ll pick my words very carefully here: I think we’ve seen a naïve decision. I’m not saying it wasn’t a foul, I’m not saying it wasn’t obstruction, but there’s a very big difference between giving somebody a second yellow card and ejecting him from the game. Was there real malice? Was there an edge to what he did? Like I said, I haven’t seen it, so I’m not going to get too deep into that. But it strikes me as a maybe a little bit of a naïve decision. And it affected the game, no two ways about it.”

NYRBII took the lead against an emotionally drained Nashville SC team with a set-piece goal from Duncan in the 71st minute, and with the man advantage, was able to hold off a potential comeback from the Boys in Gold.

By the time Ropapa Mensah officially entered the game (replacing Kharlton Belmar, which pushed Lebo Moloto to the right wing and Alan Winn to the left), there was all of 2:24 to try to implement a new gameplan before Lasso’s second yellow card. As you can see, the strikers… didn’t have a chance to play side-by-side there. 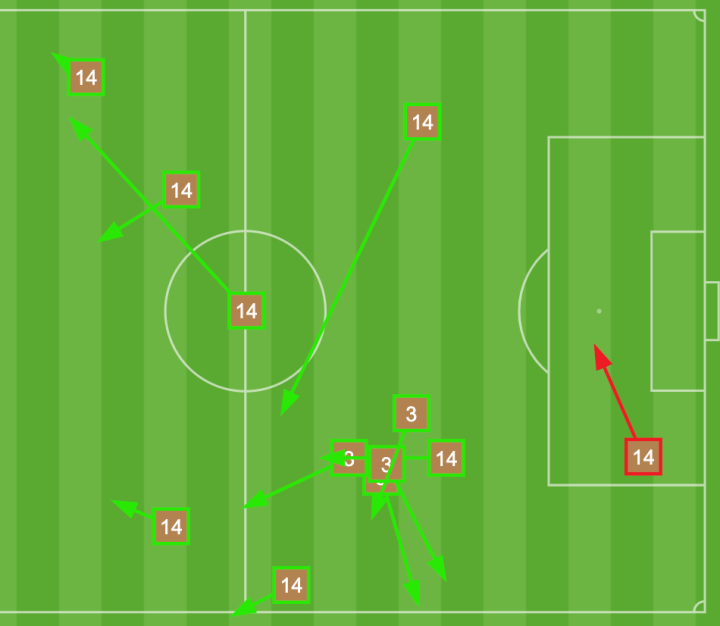 That’s vaguely Ropapa on the right and Ríos on the left. More importantly, it’s neither of them having enough of the ball to do anything, because NSC had to scramble to try to hold onto the game,

And finally, your voting post and the results of the Community Ratings:

Through 93 minutes and 20 seconds of play, it looked like Nashville SC would be robbed of a result by a poor decision from the center official. Bolu Akinyode had different plans.

The Nashville central midfielder saw the ball ricochet off his chest, played it with the left knee, and wound up with the same leg, whipping it through the laces. A fortunate deflection from Charleston Battery defender Kyle Nelson wrong-footed Battery keeper Joe Kuzminsky, and justice was served in front of 6,662 fans at First Tennessee Park in a 2-1 home victory.

The column with postgame quotes provided by NSC media relations:

A touch from Lebo Moloto and header by Ken Tribbett kept the ball alive for Nashville, and Akinyode made magic.

“His job, and he does a damn good job as well, is to break up the game, to keep the ball, to show the sort of bravery and endeavor that I think all good central midfield players give,” Smith explained. “It was a colossal performance from him. He’s in a position where we’ve had numerous injuries. We’ve been hit very hard in that central midfield area with the likes of Derrick Jones and Michael Reed having long-term injuries, Matt LaGrassa being out for a reasonably long term. Bolu stood firm. I know he’s been a real foundational piece in there when most needed, and he’s a terrific character. A great performance tonight.”

Here’s the shot chart up to that point:

Giving up a goal against the run of play there, to me, stinks.

…and the voting post and results from your Community Ratings:

Elsewhere: Speedway gamer. … Gameday report. … Local coverage from the Charleston mainstream media. Must be nice 😒 … Ghanaweb back, baby! Mensah goal = tons of coverage in the Land of Freedom and Justice. … NSC official site on some memories.