Welcome to The Graphical, wherein I – several days later than intended – mine the Opta data (or sometimes other stats) for some insights about recent Nashville SC games. in this edition, the club’s first-ever win over Charleston Battery.

Charleston’s initial goal, in the 43rd minute, came totally against the run of play. Prior to the goal, Nashville had a 53.9%-46.1% advantage in possession, and importantly, look where the game was being played:

That’s not a lot going on in the third of the field closest to Nashville’s goal, and a pretty heavy tilt toward Charleston’s defensive half of midfield. Even more enlightening? Here’s the shot chart up to that point:

Giving up a goal against the run of play there, to me, stinks.

It seems like it is representative of a certain trend this season: the Boys in Gold conceding right before halftime, to either give up their lead or allow the opponent to get on top. Is that accurate, or just our memories lying to us because it happened two (2) times last week?

Let us explore! Here are all the goals scored between the 31st and 45th minute (by both teams) in Nashville SC games so far this season:

The table is sorted by whether or not the game state changed (changing an advantage for either team into a draw, or a draw into an advantage for either team – expanding or reducing an existing lead does not change the game state for these purposes). Only three of the now-13 goals scored after the 30th minute but before halftime didn’t change the game state: Nashville expanded its lead over South Georgia Tormenta to two goals, then saw it shrink back to one in the US Open Cup, and NSC expanded its lead over Indy Eleven to two goals just before halftime in Nissan Stadium.

So of the 10 that changed the game state, five were scored by Nashville, and five by the opponent. It’s in the eye of the beholder exactly how close to the half a goal has to be scored to count as a deflating tally on the cusp of halftime, but I’ll set the cutoff at five minutes (it could be as much as 10 without affecting the results, since there hasn’t been a goal scored between the 34th and 41st minutes all season anyway). Again, it’s level: Nashville has three, the opponent has three.

So… conclusions? It is bad to give up goals. I don’t think there’s a particular pattern at play here, though. Lotta words and work to come to a reasonably simple conclusion, IMO.

As implied above, Nashville SC had control of the run of play essentially throughout the contest. The nature of the game is that sometimes your dominance isn’t going to lead to a result (and other times, luck can be on your side despite being dominated).

You already saw the shot map at the point of Charleston’s goal. Here’s how it player out for the entire game:

The Battery’s only other shot on target came from nearly 30 yards out (though there’s some sort of error here: the shot that Matt LaGrassa saved off the line isn’t included here at all. It should be scored as a blocked shot from in between the 25 and 19 inside the penalty area there).

Meanwhile, Nashville had similar inaccuracy issues – certainly something to focus on improving – with only six of their 20 shots on-target. Indeed their on-goal percentage of 30% was worse than Charleston’s 33% (3/9). It’s up to the viewer to decide how much worse that is, because Nashville’s shots came entirely from better positions. 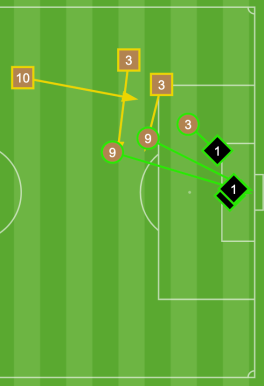 Charleston managed only four of their nine shots from within the penalty area (including two of the three shots on goal). Of Nashville’s 20 shots, 16 were from inside the area, and 10 of those from within the width of the six-yard box.

In large part, a massive performance from keeper Joe Kuzminsky – particularly in a six-minute span or so late in the first half when he made three incredible saves, pictured at right – could have been the difference in this game. Those were good shots from dangerous positions, particularly Mensah’s.

As also applies to the idea of taking 16 shots off-target, perhaps the guys whose job it is to finish could do better.

From my perspective, you tip the cap to Kuzminsky and move along. There’s a decent chance I would feel a heck of a lot less copacetic if the result had been different.

I’m sort of burying the lede here from a larger tactical perspective, because for the first time in a while, Nashville SC went with a 3-5-2 formation. The way the players’ positions worked out over the course of the game was essentially the platonic ideal of how Gary Smith would like for this system to work:

Three comfortably-spaced defenders across the back, and the central defensive midfielders owning the middle of the field. That lets the wingbacks get forward a bit, while the attacking midfielder is just behind the strikers, ready to provide them with meaningful service.

As I’ve already pointed out, it worked pretty well in terms of generating offense, and there just wasn’t the level of finishing you’d expect for much of the night. It’s just gonna happen at times.

In the 71st minute, Smith essentially made a pair of like-for-like substitutions, at least as it related to positional play: Kharlton Belmar replaced Cameron Lancaster at the right-sided striker, and Taylor Washington replaced Jimmy Ockford (moving Justin Davis from the LWB position to LCB, as Washington played wingback and Davis took over Ockford’s vacated spot).

In the 82nd, Alan Winn came on for Darnell King, but even a very different type of player still didn’t take away the overall philosophy of the tactical approach: Smith stayed with three at the back, but the wingbacks (namely Winn, but Washington to an extent, as well) pushed higher up the field. The central midfielders did, too: without changing the formation, the approach became a lot more offense-oriented.

That put more pressure on the three centerbacks to hold firm, and they did (there ultimately wasn’t a ton to do for them in that phase of the game: Charleston ultimately had just six open-play passes from the attacking third from the 82nd minute on, only two of them complete).

A coach who – unfairly at times – gets flak for being overly defensive-minded didn’t have to shift from what looks like a defensive formation, but still managed to be very defensively sound with a ton more attacking punch in that final stage.

OK I have to do the one thing

A referee story in two acts: 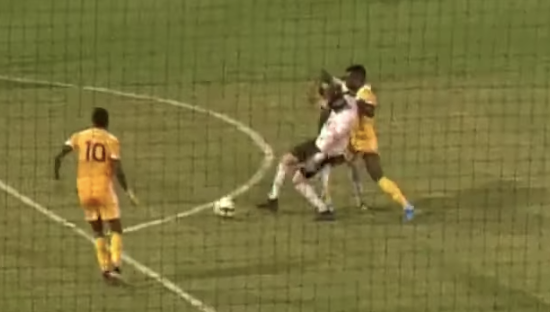 …and the IFAB rules

Even if the ball had come of Belmar (it didn’t, and it’s the center official and assistant referee are collecting a paycheck because of their supposed ability to recognize and adjudicate actions in a soccer game), the AR’s mechanism in signaling the offside also violated the guidelines in the literal laws of the game.

I hate to be “lol u suck” about dudes who are just out here doing a job (especially because it’s a difficult one). But I don’t think that linesman is getting a call from the assignor any time soon, nor should he. When you can’t perform the job, you shouldn’t get hired to do it.

What did you see from the data? Poke around here and share your thoughts.