Here is it, the final analytical piece of the 2020 season preview. See position semi-previews and the overview here:

So, let us synthesize that into some meaningful takeaways.

This is going to draw heavily on my end-of-season power ratings from last year (excited to get them going again!) and the league overview linked above. Obviously some feelingsball analysis will be important, as well. Without further ado, the Western Conference:

Some explanations necessary, starting right at the very top: with Seattle’s elimination from the Concacaf Champions League last night, I think they have the opportunity to shift focus early to league play in a way that the other contenders for the Supporter’s Shield do not. In the West, that means, to me, a finish above LAFC. The Sounders are the reigning champs and got better in the offseason, and that little bit of focus they can have over LAFC through mid-March (and potentially beyond) is the tiebreaker in my eyes.

Beyond that, I’m a believer in LA Galaxy being better without Zlatan. Probably a less highlight-worthy style of offense, but his replacement is a hard-worker defensively in Chicharito, and as long as the service from Christian Pavon remains what it was in the second half of last year, the Little Pea can get the job done.

I’m a believer in two of last year’s first-year coaches, Luchi Gonzalez and Matias Almeyda (not least of which because Almeyda’s team was one of the best not to make the playoffs last year, with the late-season collapse dooming the Quakes), while I think Peter Vermes’s Sporting Kansas City has a bounceback from a year with plenty of bad luck, and also adds some scoring in Mexico international Alan Pulido.

Minnesota and Portland both lost some key pieces (Minnesota up front and Portland on the back-end), and while I hemmed and hawed over the order of those two – important, because it’s the playoff line – they’re close enough that you could go with Minnesota’s “team on the rise” narrative or Portland’s history of consistent success.

Houston was a bit of an unlucky team last year, and I’m a believe in Tab Ramos. Running the famed USYNT 4-4-3 is not going to be the most tactically complex MLS philosophy, but a simplification after a year of turmoil in Houston seems like the right medicine.

And here we have Nashville SC. Believe it or not, I actually think 10th is pretty close to a bottom-out, overly-pessimistic prediction. The defense alone should be middle-of-the-pack or better, and timely scoring could see the team a couple slots higher. If the scoring outperforms expectations, being in the hunt for a playoff spot isn’t out of the question. They’ll be able to nick enough draws to not be an abject embarrassment. It’s turning some of those into wins that is the question.

The Rapids, Salt Lake, and Vancouver were all bad teams last year and didn’t seem to get a ton better in the offseason. I do worry that I’m slightly underrating Colorado because a whole year without the worst manager ever to take the pitch in MLS has to provide a boost (time to take a big sip out of my “glad Anthony Hudson’s not a US Youth National Team coach now” mug of piping hot coffee and hit the wikipedias!).

And on to the East:

New York City FC and Atlanta United went 1-2 in the league last year, and both got better (I guess in Atlanta’s case, maintained an extremely high level) on the roster this offseason. Atlanta has a bit of visa/injury turmoil early in the year that will be exacerbated by the Concacaf Champions League more than any failings with NYCFC will be.

Toronto FC was a slightly unlucky team on the pitch last year, to say nothing of the luck when it comes to injury, etc. Being without Michael Bradley for the first couple months of the season may be a blessing in disguise as they form a post-Bradley identity in the waning stages of his career.

Two youth-oriented teams that underachieved last year in different ways – Philadelphia was still great, but could have been better if the xG numbers had turned out to be gospel, while the Red Bulls were poor in comparison to expectations – should probably see a bounceback with their ability to maintain consistency. Philly can lean into its new 4-diamond-2 philosophy from the jump, while NYRB gets to move along from the Bradley Wright-Phillips era with a cleaner break after he was oft-injured last year.

My opinion on Montreal has really changed since the preseason matchup against Nashville SC, with the team looking fluid in CCL, and the offensive talent boasted in La Metropole likely to break out, albeit in fits and starts at times. I also think Columbus Crew, with a roster more made in Caleb Porter’s image than inherited from Gregg Berhalter (albeit one that didn’t add a ton of value, per TransferMarkt) is ready to be the Portland Timbers of old.

That takes us to three controversial choices. To me, Miami will probably be a good team in time. However, they’re leaning hard into the “South American youth” idea that GM Paul McDonough went with at Atlanta. While adding MLS vets like Luis Robles, Roman Torres, and Wil Trapp made me think about bumping them up, there will be some growing pains. Chicago and DC were on opposite sides of the luck coin last year: the Fire was one of the best teams in MLS by xG standards, but couldn’t find the final piece offensively or defensively. DC was pretty poor, but lived on a bit of finishing luck. Both have blown up their teams (Chicago perhaps prematurely, DC by losing a bunch of guys who outperformed their xG numbers and led to that luck, albeit not all by choice). I think a regression to the mean and depletion of each roster sees them miss the playoffs.

Orlando, New England (pending improvement through Bruce Arena mechanisms), and Cincinnati will all be bad. I put FCC last mostly because I think it’s funny and like half their fanbase will come back with, “yeah but the attendance will be great,” which is also funny. Also their coach got fired for being racist, some preseason turmoil that won’t help! 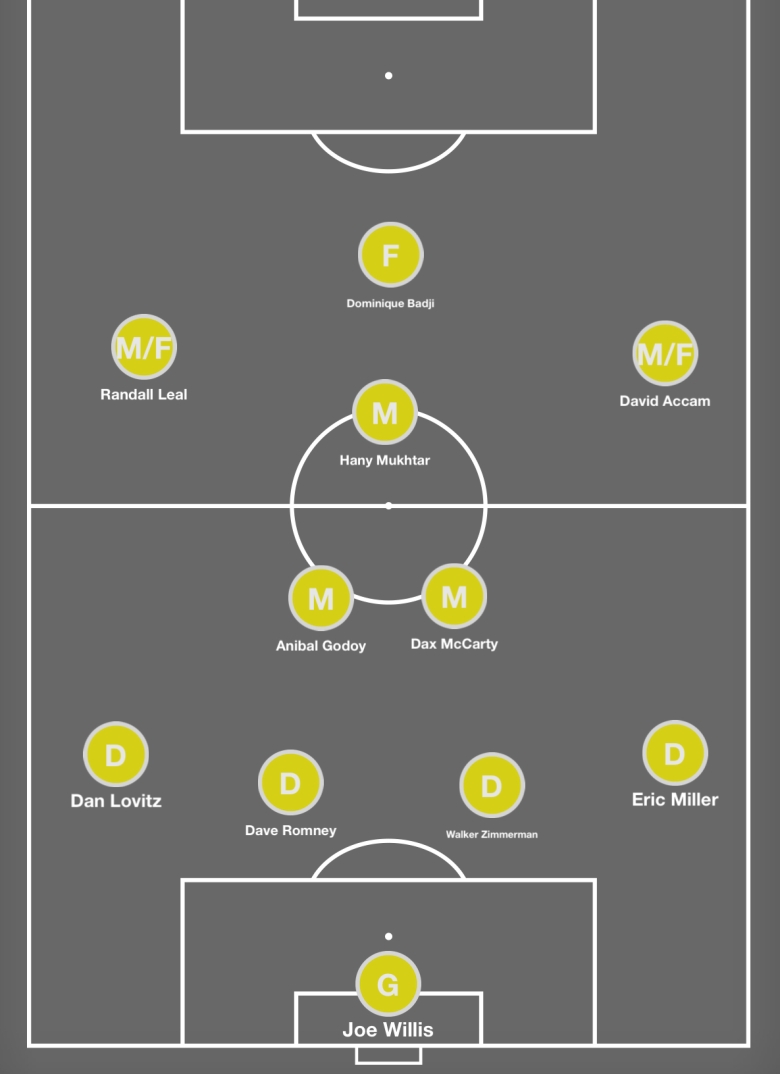 There’s wiggle room at just a couple positions to me: the non-Leal winger (Leal can play on either side), with Abu Danladi and Alan Winn challenging, possibly right back with Brayan Beckeles the challenger, and striker, where Badji, Danladi, and Daniel Ríos should all get plenty of opportunity to contribute.

Of course, some positions will see more minutes for backup players than others, too. There’s also a distinct possibility that Nashville adds players in March or during the Summer Transfer Window – Mike Jacobs didn’t add $350k in GAM for nothin’ this week.