At long last, the final piece of the statistical overview of Nashville SC heading into the 2020 MLS season. This may ultimately prove to be the most important position in a Gary Smith team: the central midfielders.

Smith has used a double-pivot in the middle of the pitch regardless of what’s going on around that duo (3-5-2/5-3-2, 4-2-3-1, 4-2-2, and many more formations! Always with a couple dudes in the middle), and it’s pretty clear who his first-choice players are going to be there. Let’s look at not just Dax McCarty and Aníbal Godoy, but also their compatriots in the center.

We begin with the guys coming from MLS – with a season of Jimmy Medranda and three of Derrick Jones mixed in with the aforementioned pair:

We’re going to have one outlier when it comes to expected goals and assists. Otherwise, there’s a fairly tight band in which the Nashville players fit in with the MLS population at the position group: 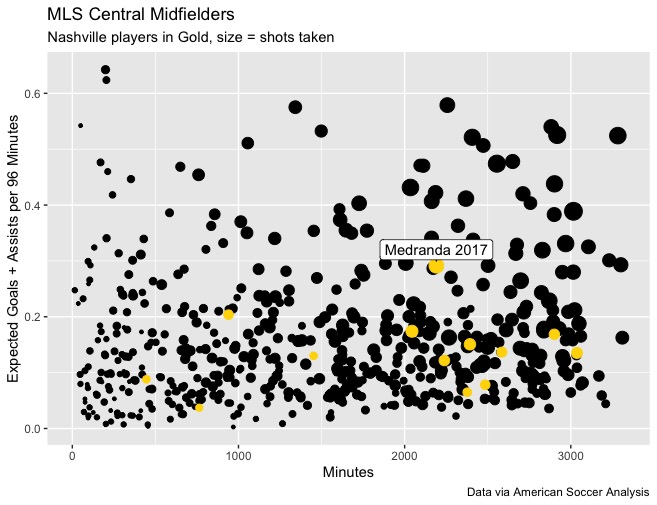 That outlier is, as you can see, Jimmy Medranda, and the reason there’s only one year of the Colombian recorded as a central midfielder is probably one of the reasons he’s such an outlier: he’s a positionally-versatile guy who has also been coded five times as a fullback/wingback and once as a winger. I’d expect if/when he gets healthy (and unfortunately given his recent history, that’s no guarantee for 2020, at least), he plays more of an advanced role in the center, or somewhere along the left side.

So, we’re not expecting a lot of direct offensive involvement from the central defensive midfield. How should they do in terms of possession? Let’s break it down via the American Soccer Analysis xPassing metric:

You’ll note that the slope isn’t 1, but that’s largely due to different success rates by position (you can read why the formula doesn’t take position into account when calculating xPass here).

Taking a look at the two outliers on the low end of completion rate, Derrick Jones’s performance as a 20-year old will hopefully have improved by now (and indeed, his 2018 and 2019, while both with small sample sizes, looked like massive improvement), and if preseason is any indication, he may not fit into this category anyway, but rather into attacking midfield.

We’ve already taken a look at how much more Jimmy Medranda’s 2017 showed an offensive bite, and taking risks to try to create offense can be a bit of a zero-sum game when looking at these two metrics side-by-side.

It’s worth noting that, as you move to the right on the chart, you’re essentially increasing the safety of the pass (i.e. likelihood that it’s completed by an average player). Nashville SC’s central midfielders are in a pretty comfortable spot farther to the right. By being above the linear regression line, they’re also completing more passes than expected (even if the formula thinks a pass is dangerous, if you complete it consistently anyway, that’s called “being good”).

Both here and elsewhere, there’s plenty of research explaining how difficult it is to attribute a team’s defensive success or failure to individual players. Unlike on offense, there is no assist/shot/goal metric. However, we can look at the overall defensive performances of Chicago and San Jose last season and at least decide whether or not Godoy and McCarty played for defensively-successful teams (Jones played just 57 MLS minutes last year – I’ll cover him a bit in the next chart):

As you can see, both teams were better-than-average defensively from an xG perspective, but, notably, both were slightly worse than that in strict goals-against (opponent-adjusted) terms. How you want to ascribe that characteristic to the central midfielders is up to you. In the name of optimism, I’ll say they were responsible for helping prevent opponents’ buildup to good goal-scoring looks, while the FAILING defenders and keepers allowed higher conversion rates behind them. That’s the ticket!

No league-wide xG data available for USL, but we can at least look at the teams’ goals-against performances, with two teams of note: Nashville SC (you may have heard of ’em!) and Charleston Battery. Those teams have provided central midfield players to the MLS edition of the Boys in Gold: 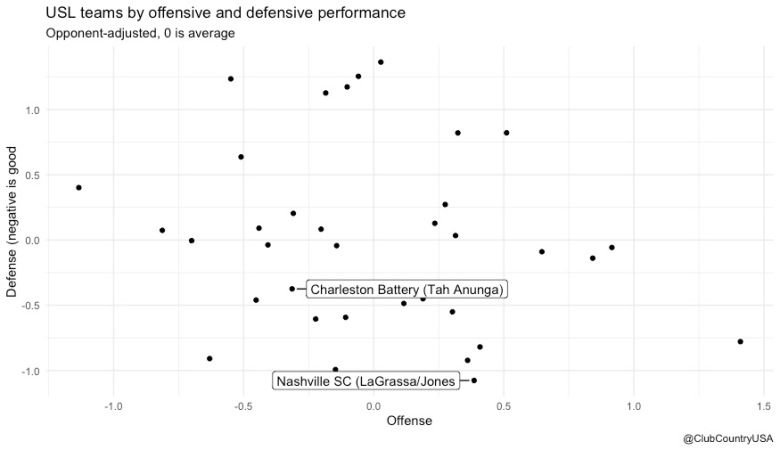 Charleston was a pretty bad offensive team, Nashville was a good-not great one. For the purposes of our current discussion, though, the defenses were pretty good (Charleston) and elite (Nashville). As with the more robust data available for the MLS players, we’ll attribute all the success to the players we’re most interested in here. Any and all lack of success is attributable to players who are in Gold this year.

It worth noting that Nashville’s scouting at this position is probably as solid as any other on the roster. Two of the players performed under this technical staff last year, another is a guy they played against several times in the past two years. They landed their top intra-MLS guy at the position in Aníbal Godoy, and picked up another guy who’s been a captain almost everywhere he’s been.

Importantly, Gary Smith is a guy with a reputation of being a strong defensive coach (with criticisms both unfair and entirely fair about being too defensive at times), and he was a central midfielder during his playing days. If nothing else, he knows what he’s looking for. His track record as a coach indicates the eye is good.