Hey, without a computer for the better part of the past nine days, I’ve gotten behind. Trying to crank some of these pieces out before the playoffs get real.

Nashville SC head coach Gary Smith often talks (in more general terms) about how different shapes for the opponent do or do not provide NSC good matchups when the Boys in Gold are in certain formations. Against NCFC, we saw both teams in the same 4-2-3-1 philosophy.

That applied both to the starting lineup and how the starters’ movements averaged out over the course of the game.

The central defensive midfielders stay close, the striker plays off the right attacking shoulder of his No. 10 (conveniently, both teams’ wearing the number itself in this game), and the fullbacks keep relatively conservative positions, rather than defending high up the field and overlapping to average a position that’s across the midway line.

However, with those parameters established, we can also see where Nashville SC got better play to win the game. Here are the defensive actions for both teams’ holding midfielders:

While both teams’ duos were able to do a little bit of sideline-to-sideline work defensively, Nashville’s had much more vertical range, with Bolu Akinyode doing work into his own box (LaGrassa’s No. 20 in the box was, I believe, on a corner kick), and LaGrassa getting all the way into the offensive Zone 14, and each of them on the border of the offensive third of the field along that left touchline.

Meanwhile, NCFC’s duo were mostly kept in their own end. In fact, if I’d stripped out recoveries (which are generally considered to be less aggressive defensive actions – it’s essentially the ball showing up to you without much activity required on your own end), there were only a handful of defensive actions at all. Nashville SC won the midfield.

They also won the wings, and the activity of Alan Winn and Ropapa Mensah in getting into the offensive zone probably played a role in keeping North Carolina FC from pushing forward much. 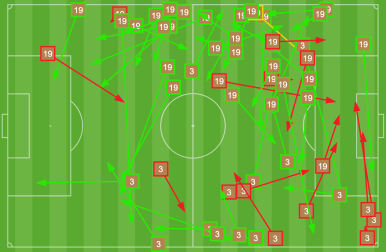 NCFC’s wingers were an absolute non-entity, while Nashville’s got on the ball, got the ball into dangerous areas, and helped drive the play.

Both teams had the same formation, with reasonably similar philosophies (albeit with slight tweaks, such as Nashville choosing to be more aggressive at home). The main difference between these two squads was, yes, a set piece goal, but more importantly, simple stronger play from the individuals.

Nashville did not win the possession game in this one. Though things were relatively even, they had 49% of the ball come the full time whistle. How is that reconciled with what looks a pretty dominant performance based on the above images?

Let us take a look at game state, and where the possession took place. Here’s the full-game heatmap: 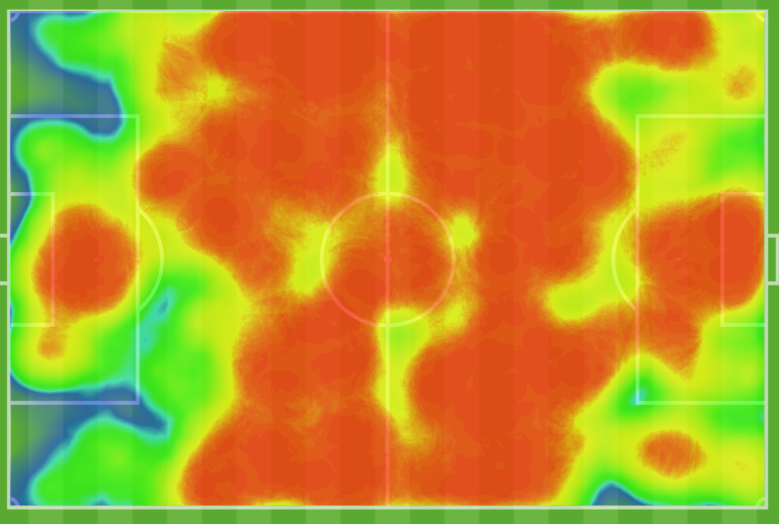 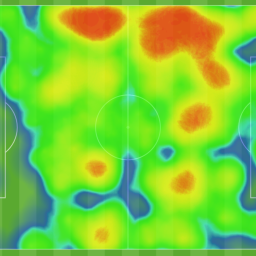 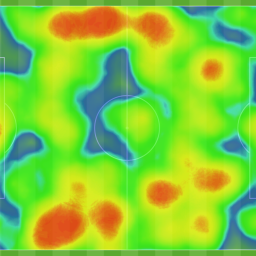 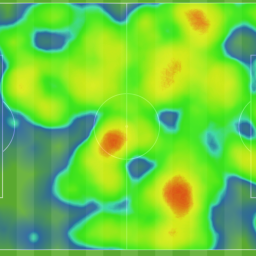 The game largely played out almost exactly how Gary Smith would have liked. While the contest was level, the ball was kept in midfield, but with a tilt heavily toward the goal Nashville was attacking.

The second part is the one that soccer fans (including me) sometimes overlook: while the Boys in Gold led 1-0, the game was played wide, sure, but it did seem to be tilted toward the Boys in Gold’s defensive goal. However, that ended up working out perfectly. North Carolina FC was pushing for an equalizer, but NSC managed to keep them out of dangerous scoring areas. Thanks to NCFC throwing numbers forward, Nashville was given the opening to attack on the counter, which they did for the insurance goal. It can look scary, but playing in your own end is what Nashville wants there, because it provides that window to put the game away.

After the score went to 2-0, Nashville easily kept NCFC pinned in its own end, and there was never a serious threat from Carolina after that.

ATL UTD 2 got four shots on-target, three of them from bad angles (shooting from wide gives less of the face of goal to shoot at) and even one of those from outside the box. The only one that looks credible there is the No. 42 right in front of the six-yard box, which came from a centerback off a corner kick. Not exactly the most-feared situation.

That’s not to say Nashville’s shotmap necessarily looks dominant – in part because a bunch of those guys on the doorstep cover each other up – but we have:

So… that’s a much higher volume of positive events. Perhaps not a woodshedding, but when you score three as early as NSC did, you can live with being a little more speculative for the rest of the game.

Given that they got 29 minutes apiece (including two minutes of stoppage time), this was the largest sample size we’ve had in quite some time for both Derrick Jones and Cameron Lancaster.

Of course, given that Nashville was mostly seeing out a result by the time they entered the contest, there wasn’t a ton for either of them to do. Here’s their every-action map (attacking left-to-right):

Solid passing, with the unsuccessful attempts most when trying to get the ball into scoring positions (i.e. times that taking a risk is worth it for the potential payoff), and aside from one unnecessary foul committed by Lancaster, not a whole lot negative to point out.

Again: game situation made it such that neither was going to have a ton to do.

I did find it interesting that Jones played mostly as a true No. 10, as has been the case in most of his recent performances. Obviously a holding or box-to-box midfield role is his long-term future, but getting the opportunity to be a big, intimidating playmaker with the ball at his feet now can help him be a more dangerous attacker from those deep-lying positions when he settled into them in the future. It’s almost just a developmental placement for him.

As always, poke around the Opta data for yourself, and feel free to share your observations in the comments or on social media.