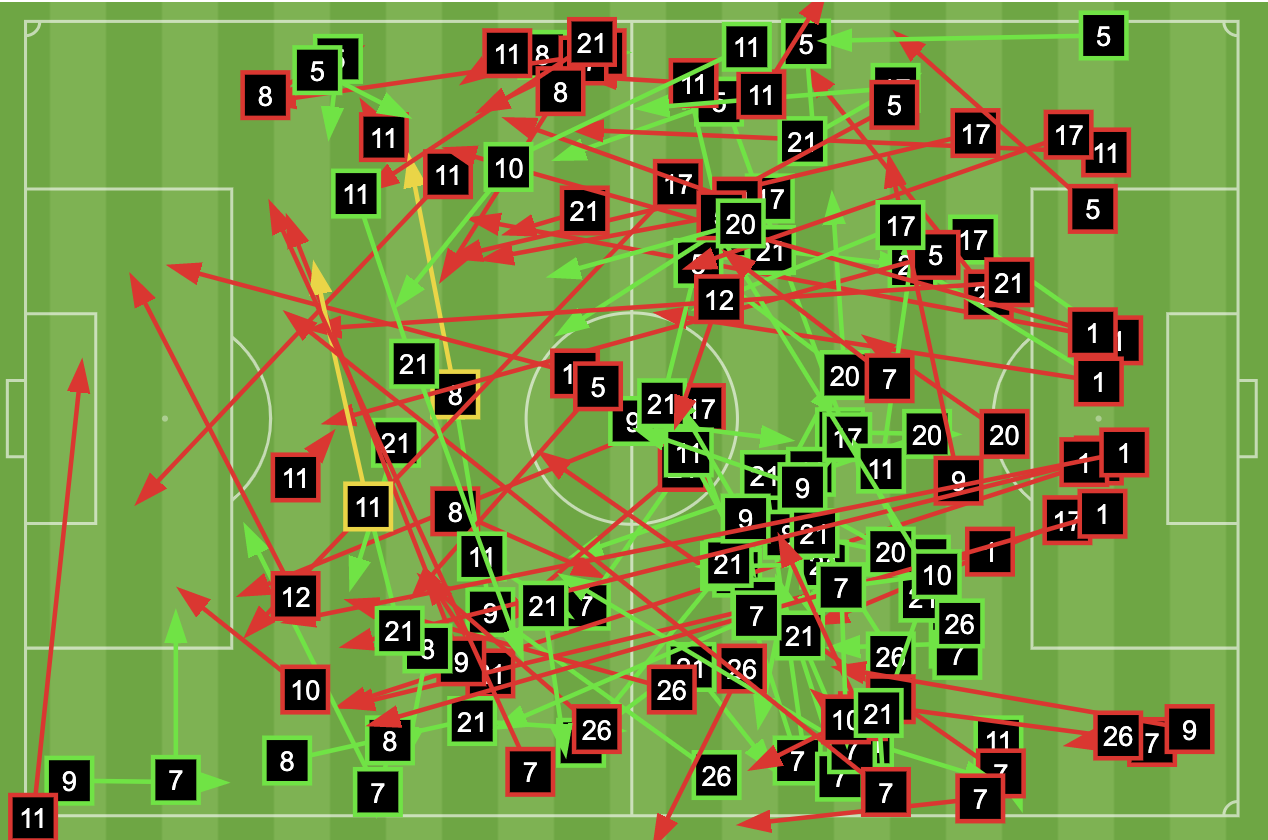 Welcome to The Graphical, wherein I mine the Opta data for insight into recent Nashville SC games. Today, a frustrating draw against the Pittsburg Riverhounds.

Riverhounds bunker for the draw

It’s no insult to Pittsburgh or head coach Bob Lilley to say that, by the time centerback Tobi Adewole was sent off, they were ready to sit back and play for the draw. Take a look at the passmaps for Pittsburgh before and after the red card: 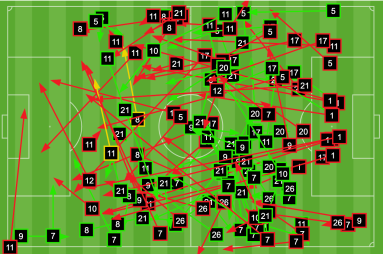 They had much, much more possession (and more successful possession) in the opening 39 minutes or so than they did in the subsequent 58. They were very clearly, even in possession (a phase of the game where Pittsburgh has tended to be OK-at-best, though they’re improved this year than previous seasons), just trying to make sure the ball got out of their own end.

Here’s the combined passmap for both teams, again before and after the red card:

One thing that jumps off the page in both sets of images is the importance former NSC fullback Ryan James plays to the Hounds when they’re in possession, by the way. The concentration on that left flank with No. 7’s participation in the buildup points out just how important he is to what they do offensively.

Anyway, by the time the Boys in Gold earned a man advantage, the field was already a little tilted in Pittsburgh’s direction: that’s not out of the ordinary, as they attempt to absorb pressure and hit teams on the counter. When NSC did go a man up, the ball pretty much lived on Pittsburgh’s half of the field.

So why couldn’t Nashville score?

You tend to see “no ideas” thrown around in the more negative wings of social media when Nashville doesn’t score (or scores less than is deemed acceptable), and sometimes it’s the case. However, I’d contend that it was what happens at the end of an idea – particularly putting the ball into the back of the net – that was the bigger issue Saturday.

This shot map, to me, is not half-bad for a game against a strong defensive opponent. 10 shots, only two outside the penalty area. Eight of them came from the width of the six-yard box – high-value opportunities.

Kyle Morton made four saves, two or three of them pretty impressive ones. But some of Nashville’s misses were from dangerous areas, and didn’t even test the keeper. The obvious one that jumps to mind is Lebo Moloto pulling the ball wide of an open net shortly before the end of the first half, and a couple of the others (the red 14 at the left edge of the box, a Ríos attempt from a corner, and the red 15 right near the penalty spot, an Ockford attempt from a deep free kick) were headed. But on a night when you know the opponent is going to be very stout defensively, you have to make the most of your opportunities, and the Boys in Gold failed to do that.

Pittsburgh subbed at halftime to get a like-for-like replacement for Adewole on the field: they took off attacking midfielder Robbie Mertz and inserted centerback Todd Pratzner. He occupied the LCB spot that was vacated by Adewole.

Nico Brett dropped into midfield (he would be replaced by fellow striker Christian Volesky in the second half, with Volesky trying to get a bit of a counter going to nick a late goal), leaving Steevan Dos Santos as the lone true striker. Dos Santos would also be replaced late in the game with midfielder Kevin Kerr. Even though he was nominally the team’s attacking threat, he didn’t put much effort into getting the ball into dangerous areas: Pittsburgh was playing in the offensive end only to avoid playing defense, not to try to generate scoring chances.

So: Pittsburgh played either a 5-4-0 or a 5-3-1 for the remainder of the game. You’ll note their numbers at the back (and depending on how you classify the fullbacks, that could be a 3-6-0/3-5-1) didn’t change after Adewole got sent off. Pittsburgh’s adjustment was to entirely swear off playing offense in the name of not having to change what they did defensively. That’s how you end up with the passmap at the top of the screen where they were just booting it long with no intention of actually completing those balls.

Matt LaGrassa said it best after the game:

“They got a lot of numbers behind the ball before they lost a man,” he began. “When they lost a man I think in some ways it maybe even got worse because it’s harder to pull them out, but frustrating for sure.”

(There’s also a very good piece on Rising Tactics about this concept from the exceptional Joseph Lowery).

The solution for that is probably to activate the centerbacks into the offense a bit more, or at least push them up to restrict space unless and until Pittsburgh shows any sort of intention of hitting you on the counter (they started showing this intent late, but really weren’t even leaving a player high to threaten that backline all too much).

I’ve discussed in detail why (for both positive and negative reasons) teams cross against the three-man backline. In short, the space on the wing is going to be available, but wide players see that there are multiple defenders in the box that are too difficult to carry the ball through (or pass through with precision), so it results in lumping it in and hoping.

I suspect that crossing is actually a little bit more successful in the USL than at higher levels of the game, but it remains an inherently inefficient way to generate offense. That is why teams like Pittsburgh will go to the three-man backline: they’re going to let you try and beat them with the cross, because they are aware that the execution is difficult and the conversion rates are low. They’d rather pack the middle and give you the wide spots, encouraging the cross, than let you build through the middle.

Quite frankly, Nashville needs to have a wider range of solutions (particularly when up a man) to beat a three-man backline. NSC tried to create overloads side-to-side, but the end product was too often banging in a cross.

All that said, let’s not forget about the point I made above along with the passmap: this team should probably have racked up at least one goal (and then when the Hounds have to commit a man forward to try to find an equalizer, you thrash them, like North Carolina FC did against 10-man Pittsburgh), and the thinkpieces about a lack of offense (and the complaining about “lack of ideas”) never exist.

Such is the nature of a low-scoring, high-variance game.

What did you see in the Opta data? Poke around and share your insights here or on social media.