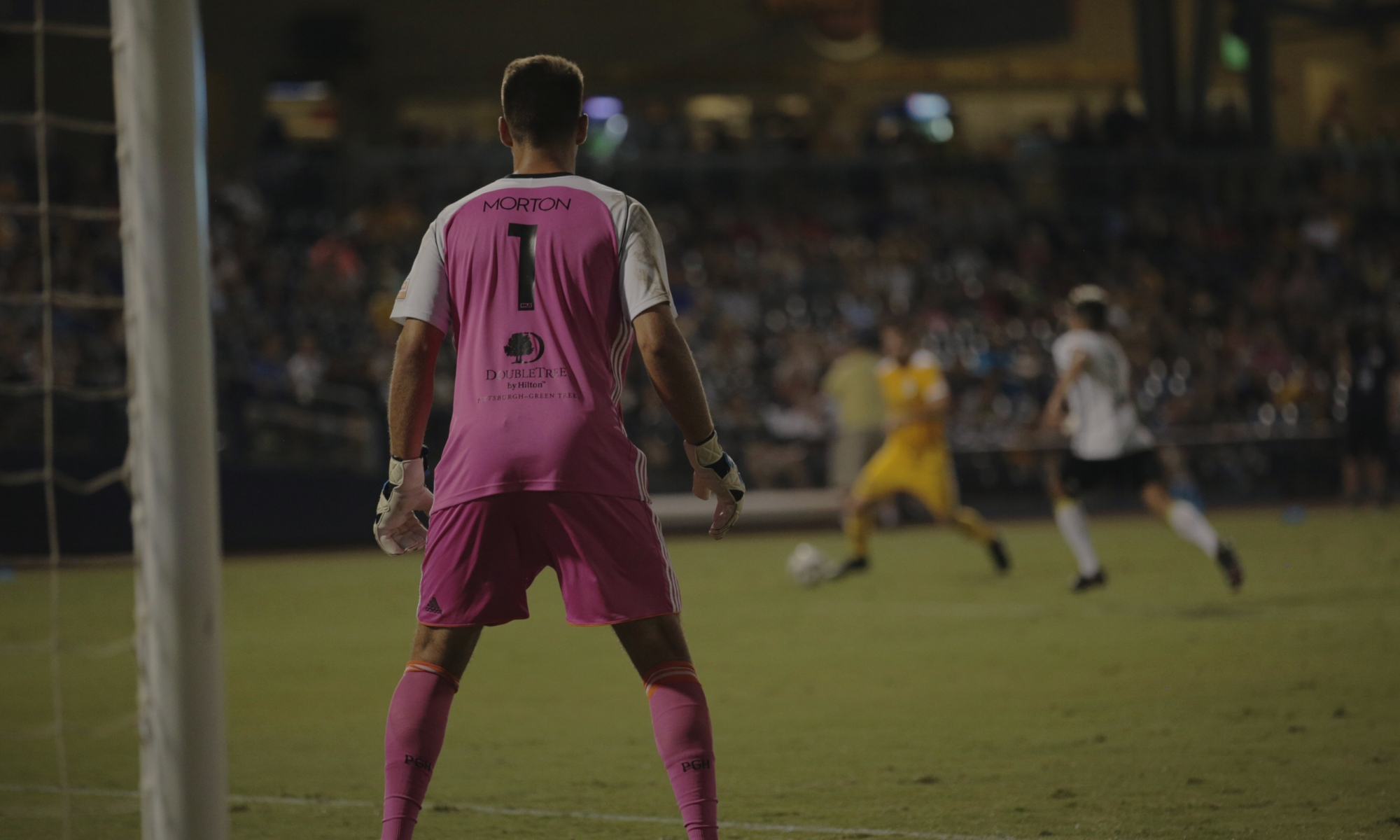 If you haven’t yet voted in the Community player ratings for the Pittsburgh or Birmingham games, please do so! Voting will close in time for The Wrap to be published Friday morning.

NASHVILLE – Despite a red card for Pittsburgh centerback Tobi Adewole in the 40th minute of Saturday’s contest at First Tennessee Park, Nashville SC couldn’t find that game-winning goal against the Riverhounds. With nearly an hour of 11-on-10 soccer (including seven minutes of stoppage time across the two halves), Nashville SC was unable to put one past Kyle Morton.

“A combination of good defending, discipline and determination, and a lack of real quality on our part,” explained Nashville SC head coach Gary Smith. “But we had enough chances, no one’s surely going to deny that. The goalkeeper, I had as Man of the Match. It’s an opportunity missed, there’s no two ways about it. Someone, somewhere, somehow should have converted, and we didn’t.”

Over the course of the game, Nashville SC managed only 10 total shots, and put only four of them on Morton’s goal – with the young keeper able to stop all four of them. There were indeed opportunities, including a Lebo Moloto shot pulled just wide moments before the first half ended, but a combination of Morton’s strong play and Nashville’s lack of clinical finishing doomed the Boys in Gold to a single point.

Nashville held a 64.6-35.4% advantage in possession, but the Riverhounds’ typical gameplan worked, even with the man disadvantage. Pittsburgh managed to make the game play out close to the middle of the pitch, with limited forays into their defensive penalty area. As is often the case with teams playing man-down soccer – and particularly for defense-first outfits, such as those under the tutelage of Pittsburgh’s Bob Lilley – they didn’t particularly attempt to get the ball into proximity of Matt Pickens’s goal (NSC’s veteran keeper faced zero shots on goal).

That defensive focus and willingness to settle for a single point made Nashville’s creation opportunity a very difficult proposition.

“I think we knew from the get-go that they’ve always kind of prided themselves on being a tough nut to crack,” said NSC midfielder Matt LaGrassa. “They were exactly that I think from the outset. They got a lot of numbers behind the ball before they lost a man. When they lost a man I think in some ways it maybe even got worse because it’s harder to pull them out, but frustrating for sure.

“I think we just tried to overload certain areas, tried to commit some more numbers forward and we felt a little more comfortable doing that because they weren’t leaving guys high really. Like I said, their coach obviously has a reputation of keeping really tight lines, being defensive-minded.”

Of course, a more clinical touch could have changed the game in one fell swoop. Nashville struck twice on set pieces when these teams met in the Steel City back in April, but couldn’t repeat that magic despite eight corner kicks. Instead, the offense relied upon crossing the ball: 26 attempts, with seven of them completed, and only two of those resulting in a shot for the recipient.

The return of midfielder Lebo Moloto (who had missed Tuesday’s win over Birmingham Legion with a concussion) and Daniel Ríos to the starting lineup (he’d received 22 minutes as a substitute, his first action in weeks with a minor groin injury) improved Nashville’s creativity in the run of play, but the final product never arrived.

“There’s some nice invention: some of it comes off, some of it doesn’t,” said Smith. “But if you’re a creator, you’ve got to take chances. [Moloto] has license to do that, especially in and around their penalty area.

“I still felt as though there were enough moments to have got ourselves in front. It really was a case of how well we can build pressure and find that opportunity. Unfortunately, there just wasn’t enough quality to really pepper their goal and put them in a position where they felt as though if they didn’t get out of their half that they were going to concede. Credit to them and maybe a little bit of disappointment on our part.”

“When we’re creating chances, I’m not as disappointed, especially against a team like that,” he said. “I think there were moments when we created well with guys that have finished for us all year long that missed chances or didn’t get the job done. I don’t know about it exactly going stagnant. I’m not as worried.”

there will be some regret in failing to move up the table. Had they earned a victory Saturday, the Boys in Gold would be sitting top of the table today, on 57 points. Instead, they’re in fourth on just 55 points, having played two more games than both No. 2 Indy Eleven and the No. 4 Riverhounds. A chance to make a statement toward the top of the table is one they’ll regret having forfeited. The margins at the top of the table are ultimately going to be very slim, and while it wasn’t a must-win for earning a first-round bye in the USL Championship playoffs (NSC will almost certainly end up with that) or a home game in the second round (things are less certain there, but the Boys in Gold control their own destiny), it’s an opportunity lost to potentially win the East’s regular season.

“It’s not going to cause any lasting damage,” Smith said. “Coming into this game it was one that we could not afford to lose for sure. It would have put Pittsburgh in a commanding position for the top four. They still have destiny in their hands with a couple of games in hand, but what we’ve seen is – over the past week – that things don’t go according to plan. There’s going to be some results that we don’t expect.”

Nashville next takes the field in Northern Virginia Saturday evening, taking on Loudoun United – the USL affiliate of MLS club DC United. While Loudoun has won just once in its last 10 games – and six times all year – Nashville can’t afford to play below its top level. The game kicks off from Segra Field in Leesburg, Va. at 7:30 p.m. EDT.