The battle at the top of the East got really interesting with losses for Indy, New York (a pair of them, in fact, for the Baby Bulls), and Tampa. Nashville and Pittsburgh couldn’t find a clear winner between them to take serious advantage, but the big drops for NYRBII and Tampa do see the Riverhounds take over second spot in the East (despite a slight drop in raw numbers).

The Eleven have to be wiping the sweat off their brow after the loss to Birmingham doesn’t punish them a whole lot thanks to the rest of that chaos. Indy still has a crowded schedule with six games left to play, but that’s both a strain on the ol’ stamina and an opportunity to control one’s own destiny going forward.

Other changes throughout the table are mostly uninteresting, aside from the ongoing situation with the 9-11 spots. Saint Louis is not quite two points ahead of Birmingham in the projection, with Charleston’s Sunday win over NCFC landing them in between that pair (the Battery would have been out of the playoff projection with a draw or loss). Things are very tight there, but Charleston has played one of the toughest schedules of anyone in the East – which means their run-in (Red Bulls and Birmingham, but then a non-murderer’s row of Loudoun, Memphis and Bethlehem, and even though this method is blind to location, those are all at home).

Basically what that boils down to is the Legion must win the six-pointer against Charleston in a couple weeks, or rely on getting a result against one of New York or Pittsburgh to feel solid about the playoffs. A situation that looked settled for much of the season is finally a very intriguing one with just a few weeks to go. 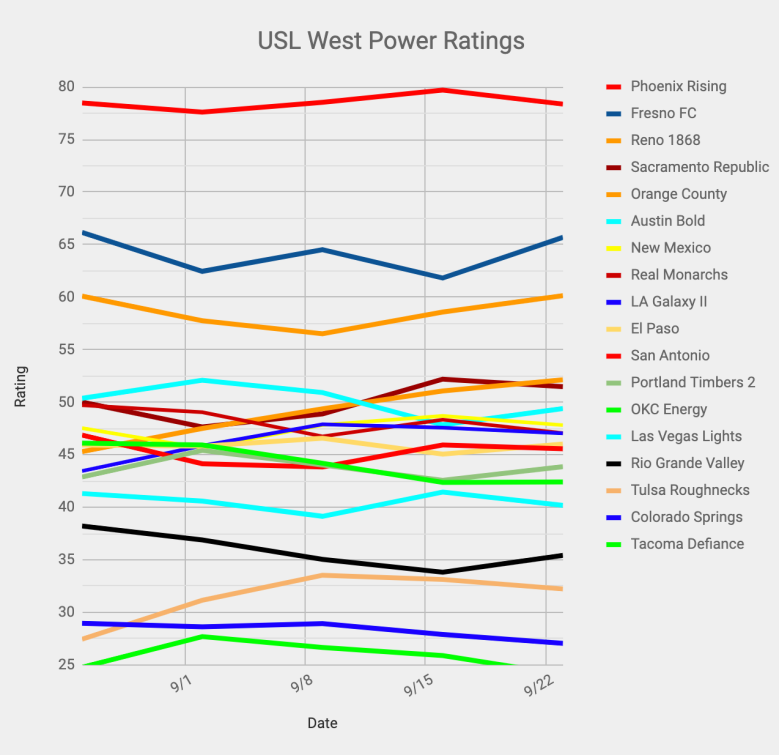 It finally happened! Phoenix list, which means Rising is only about 13 points ahead of No. 2 in the projections (and that team is Fresno, which made a huge climb with the win, too: Phoenix’s dominance over the course of the year was obviously much-discussed, but we may still have been understating things).

The interesting part, of course, comes outside of the top three: anybody from about No. 4 to No. 13 isn’t quite safe yet (though obviously OCSC and Sacramento, at least, are getting very close – and I’ve finally called it a day on Vegas’s postseason hopes), nor is any of them eliminated. As noted in the parenthetical, a couple teams are close to joining the Phoenix-Fresno-Reno triumvirate in being effectively locked into the playoffs, even if they haven’t technically clinched. A win for Sacramento Sunday over an OKC team fighting to stay in the hunt would have done it (and the draw probably doesn’t help OKC enough, either).

Given the difficulties these teams are having in finding separation with one another, the matchups are going to be the key in the final 4-5 games of the year (or six for El Paso). That’s a story for a later section, though.

This ratings method uses scoring in each individual game (compared to the opponent’s averages) to determine teams’ overall quality. It’s blind to result but not location or score, making it essentially the opposite metric of Table Power. Zero is average.

At this point in the year, any single game can only affect a team’s numbers so much (it’s only about 1/30th of the resume, after all), so the bigger swings are notable.

Fresno’s win over Phoenix may have required two unsuccessful penalty kicks by Solomon Asante (one saved, one post), but it’s still something nobody else has been able to do since the opening two months of the season. Pretty good! That bumps them way up, even though the game was at home.

Ottawa complemented a very solid 1-0 win over Tampa Bay with a flat-track bully routine against Hartford (two penalty kicks!) to trick the numbers into liking them a little more than is probably justified.

Indy drops two spots for its loss to Birmingham (who the computers just won’t come around on, even with a result like that: having several losses by three-plus goals’ll do that to you), while Orange County and San Antonio didn’t so much drop as Ottawa and Louisville moved up past them. 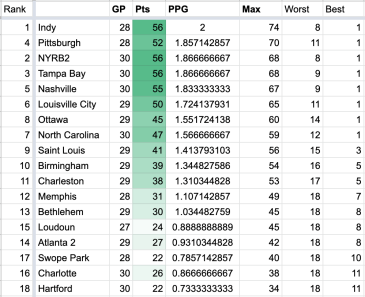 We have our first official eliminations in the East, with Charlotte and Hartford locked out of the playoffs. Eight teams are still alive for the top spot, with the top five-ish all having a realistic shot at it.

In the West, we’ve long known Phoenix would be the No. 1 seed, and with Fresno and Reno both officially locked into the postseason, it’s probably not long before they’re officially seed Nos. 2 and 3. As you may expect given the projections, there’s a significant meaty middle outside of that trio and the bottom two, who have been eliminated.