Welcome to The Graphical, wherein I mine the Opta data for insights about the most recent Nashville SC game. This time around? A 4-1 win against Bethlehem Steel.

Three of the game’s five goals were scored from set piece opportunities:

1) James Chambers’s game-opening score was a direct free kick. Bradley Bourgeois grabbed the jersey of Faris Pemi Moumbagna as he was running onto a ball over the top. He was yellow-carded for the action, rather than a straight red for Denial of Goal-Scoring Opportunity. For what it’s worth, many (including Gary Smith to me in the postgame) have said DOGSO is a mandatory red, but that’s not the case. Outside the box, the referee has discretion when it comes to player’s possession, likelihood of finishing, etc. Given Moumbagna hadn’t even run onto the ball over the top yet, you could say that, rather than some hesitance about the legitimacy of the foul/dive situation, made the difference between red and yellow.

UPDATE: Including the text of the IFAB rules because I was extremely annoyed listening to the broadcast, wherein someone with an aggressive ignorance to the rules harps for the better part of 40 minutes(!) about the ref being ignorant to the rules (which he was not!):

2) Nashville’s equalizer from Ken Tribbett came from a set piece as well, and it was mundane enough tactically to not be worth a film room piece in coming days: good service, good header, goal scored.

3) The last goal also came on a set piece, as well. The initial service didn’t find a Nashville player, but the ball rattled around enough that Ropapa Mensah tried a bicycle kick. That was blocked, but Cameron Lancaster was there to slot it home:

For what it’s worth, Lancaster had an extremely productive 30 minutes on the field. His four shots tied for the team lead, with Ken Tribbett and Ropapa Mensah both going the full 90 to get their four shots. Lancaster forced one save and scored one goal with those shots, and that’s what you want out of a goal-getting striker (well, if he’s not going to score on all of them, at least).

Daniel Ríos had to play more minutes than hoped in the busy month of May as Mensah worked back to 90-minute fitness (Sunday showed that he’s trusted to be there) and Lancaster was unavailable. Someone with Lancaster’s finishing skills is of course much, much more than a guy out there to eat up minutes. As he is able to get back to 100% fitness, the weapons on this team become all the more impressive.

Nashville SC has gone with variations on a 3-5-2/5-3-2 over the past couple years, but it’s pretty much always been a situation where the wingbacks were defenders first, unless they were working into the attacking third to launch a cross. This year, that has been different. I touched on it after the Indy Eleven match, as well, and we’re seeing the wingbacks play as pure wide midfielders, with less defensive responsibility.

That’s a 3-4-1-2. Lebo Moloto is the attacking midfielder, the central midfielders are pretty conservative, and that’s allowing the wingbacks to be purely offensive players, except in settled defense.

Take a look at a couple heatmaps that demonstrate the point:

That’s the three centerbacks on the left, and the pair of wingbacks – I’ll just call them wide midfielders, at this point – on the right. (The blob in the attacking penalty box represents Ken Tribbett’s set piece contributions, including his goal).

I noticed it at field level when the transition defense had a different workflow: if the wide centerback would collect the ball along the touchline, instead of slowing things down and playing back to allow the wingback time to recover, that became his area, and Kimura/Washington would stay high up the pitch as the offense got re-started.

Essentially, we’re looking at a more aggressive version of some similar tactics to last year – which has generally been a theme with the 2019 edition of Nashville SC – and that plays no small role in the overall increase in scoring (both offensively and defensively) in games.

There’s something to be said for the true 5-3-2 (which, as described above, this game did not really include from NSC) being the embodiment of “big dumb football” aka/fka “English football.” It – along with a lot of other two-striker configurations up top – tends to emphasize Route 1 (lumping long balls up to the strikers) or crossing (lumping wide balls in to the strikers), which are not high-percentage ways to generate offense.

As a side note, this is why some of the “c’mon Gary, put two strikers out there and let’s get some offense” complaints this season have been… misguided. Two strikers is very specifically a way to generate less offense, other than the fallacy of crosses looking like good scoring chances while not actually being those.

ANYWAY: with the narrowness of the field, there was opportunity to cross from shorter positions – meaning perhaps with more accuracy – but also to conform to the shape of the field and try to stretch the field vertically, particularly with the athleticism of Ropapa Mensah.

It’s hard to portray graphically, but the two primary offensive playmakers (non-crossing edition) Lebo Moloto and Matt LaGrassa did this in terms of passing: 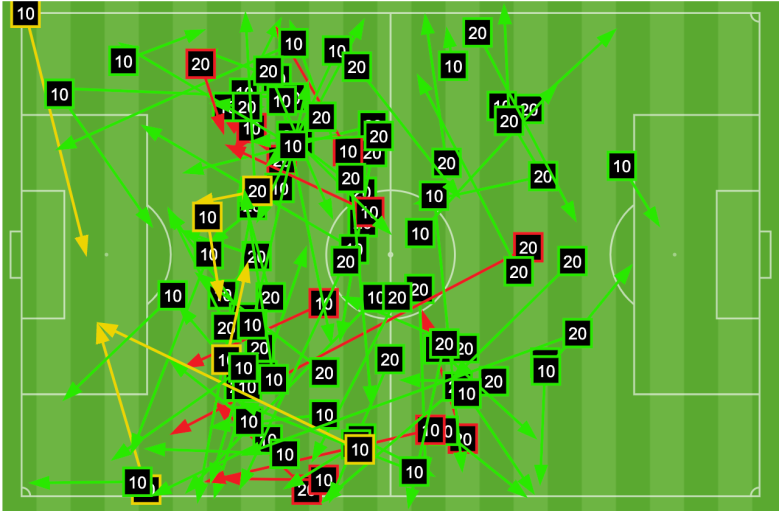 There’s still plenty of lateral passing in the midfield, but when it came to entering the scoring third, if a pass wasn’t from the all-dangerous Zone 14 (the area near the top of the penalty area), it was more likely than not a longer pass, whether a lofted ball or a true through ball.

Nashville’s athleticism mismatch with Mensah (all the more impressive because Steel has some good athletes in the back, if… undeveloped technique-wise and tactically) and athleticism/technical mismatch with Ríos allowed them to take advantage of those longer passes to get into dangerous areas. That’s how you end up with no defender in the frame 15 yards out from goal:

Even if only one of Nashville’s actual goals came from that phase of play, the ability to consistently unlock the backline by forcing the Steel’s defenders to turn and run was impressive.