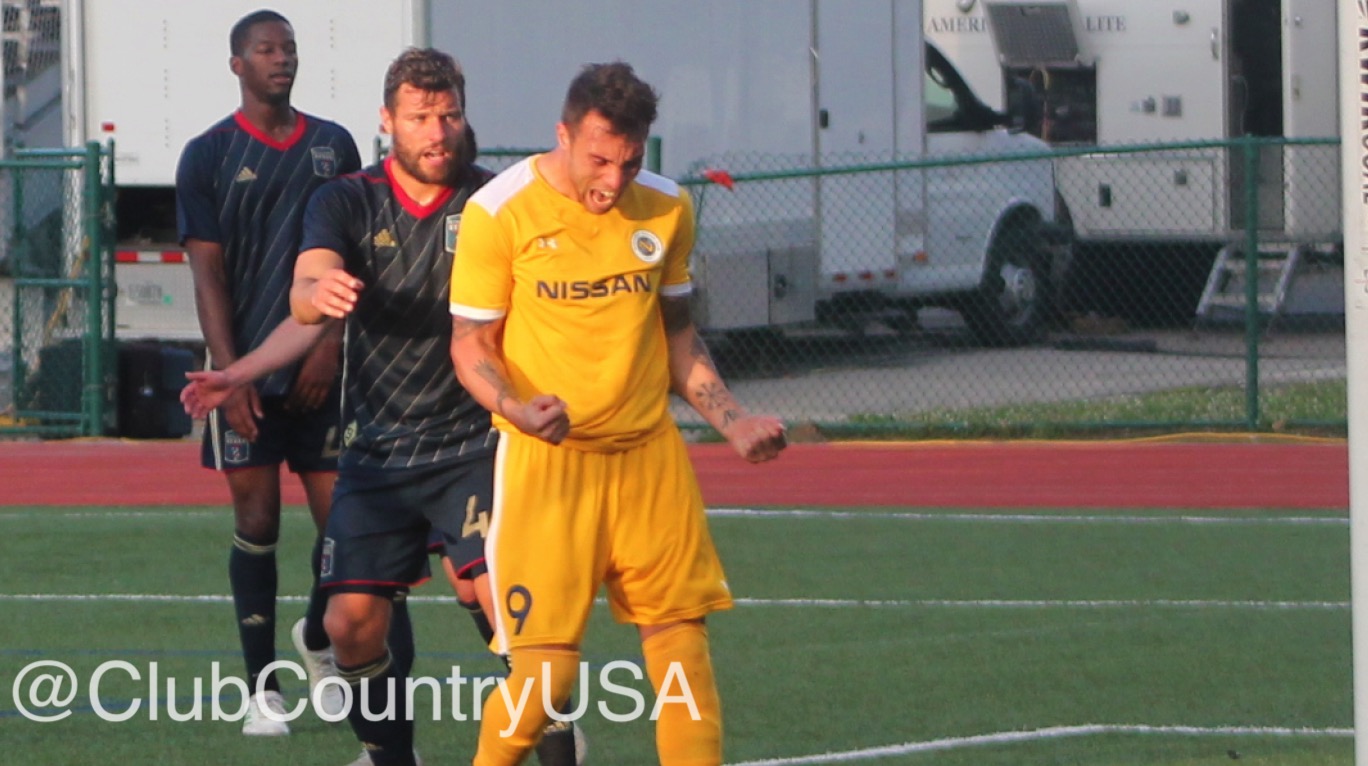 PHILADELPHIA – Despite coming against one of the USL Championship teams struggling the most – Bethlehem Steel entered the match on a seven-game winless streak – Nashville SC’s 4-1 victory Sunday afternoon was not an easy one.

The venue changed from Philadelphia’s Talen Energy Stadium to La Salle University barely 48 hours before kickoff. The facility situation was… far from ideal, with no visiting locker room on-site (Nashville SC had to bus back-and-forth from La Salle’s basketball stadium pregame and postgame, and had no hafltime locker room, instead sitting on folding chairs next to a grandstand). An even more tangible effect came from the field itself: rather than the expansive grass pitch at the home of the Philadelphia Union – which is in need of resurfacing, hence the venue switch – a miniature turf field at McCarthy Stadium meant Nashville had to scrap its intended gameplan with practically no time to implement a new one in practice.

“I’d set up to play with wingers, wide players,” said Nashville SC head coach Gary Smith. “Thursday, the game was changed. Whatever the reasons are, it was disappointing. We were looking forward to going and playing at the main stadium. Some of the footage I had seen there had really lent itself to playing with wide, dynamic individuals, and I’m sure we could have taken advantage of that.

“So, I ended up thinking that maybe the best route forward was to make sure that we were in the sort of right shape and mindset to come and deal with whatever we were going to run into. I think that shape gives us a little bit more stability to start off with. As it happened, it also gave us some really good opportunities. So it’s a bit of a breakout game for us in the 3-5-2 scoring four goals.”

“We’re professionals: we should be able to do three-back and four-back, whatever the night calls upon,” added centerback Ken Tribbett. “Today, with the field, the conditions, it was a three-back system. We adapted and we performed well. If we need to go four, we can; obviously we have the personnel to do it.”

The switcheroo wouldn’t be the last adversity faced by Nashville SC, either. In fact, despite the teams’ respective domains in the Eastern Conference – Nashville near the top, Bethlehem out of the playoff positions – it was the Steel who struck first. NSC right centerback Bradley Bourgeois was forced to drag down Steel forward Faris Femi Moumbagna to prevent a scoring opportunity early in the contest, giving up a juicy free kick inches outside Nashville’s penalty area.

Veteran Steel midfielder James Chambers, the elder statesman of the group by some margin at 32 years old, was able to bend the kick around Nashville SC’s six-man wall, and a decoy run by Anthony Fontana caught NSC keeper Connor Sparrow flat-footed. A 1-0 deficit 24 minutes into the game was not what Nashville was expecting.

It was a set piece on the other end that would allow Nashville SC to equalize just three minutes later. Tribbett, a former Steel player himself, would hammer a header home off Lebo Moloto’s corner kick, setting the game back on level terms.

“It’s something that we’ve actually looked at in training ground for the last couple weeks,” he explained. “We’ve been doing in-swingers most of the year, I said let’s just try an out-swinger. So Lebo [Moloto] whipped in a perfect ball, and I was just lucky enough to get my head on it.”

Things would go into the half level, but Nashville came out firing in the second half. the Boys in Gold were able to adapt to the narrow field conditions by taking its play vertical. Without width of the pitch to provide spacing, they went long with through balls instead. Young Ghanaian Ropapa Mensah perfectly timed a 63rd minute run, found himself in acres of space…

…and hammered home a shot over Steel keeper Carlos Miguel Coronel, who was caught in no-man’s land without any defensive help arriving.

“We know how [Mensah] wants to play, and it was a narrower field,” said defender Kosuke Kimura. “Everybody was talking about: just turn them, turn them, turn them. We had Ropapa, we had [Daniel] Ríos, two guys that are not easy to defend. We kept telling them – especially at the beginning of each half – to try and turn them. As long as you get help, you have energy. We told Ropapa, Ríos, Lancaster: keep going behind, which worked.

“We knew that if we keep doing it, working at it… We have a good group of guys. These are guys who never cheat; they work hard. Everybody has everybody’s back. We just kept pushing and then we got the second goal, and that’s it.”

That wasn’t really it though, given that Nashville would augment the second goal with a third and a fourth. In fact, it was Kimura himself putting Nashville up 3-1, seriously limiting the chances of a Steel comeback. The 35-year old MLS veteran is not known as a prolific scorer – he last put one in the back of the net in 2017, and before that had been kept off the sheet since 2012 – but opportunity struck when Carlos punched a loose ball away from his goalframe… but not far enough to get past Kimura.

The right wingback didn’t exactly fire a laser – his left-footed shot bounced once before sneaking past Carlos – but what counts is finding twine, and he did just that.

“I was running and the ball came, and I just told myself, ‘Just keep it down, keep it down,’” Kimura said with a laugh. “That’s all I focused on. I put it all the frame, and just tried to put it on the ground, and it worked.”

The final tally would be provided by a player who is somehow the most and least likely source. Forward Cameron Lancaster set a single-season USL Championship scoring record last season, netting 26 goals for Louisville City FC. This year, he scored in Nashville’s opener against Loudoun United. In between, he’d been in and out of the lineup with a soft tissue injury, and only scored once more in league play.

In the 83rd minute, he slotted home the rebound from a Mensah bicycle kick attempt, and his celebration indicated just how excited and relieved he was to get back on the scorer’s sheet.

With the win, Nashville SC moves to third on the Eastern Conference table (though fifth in points per game), with an opportunity to continue climbing with third-bottom Hartford Athletic up next, then a two-game home stand at First Tennessee Park.

“We can’t wait,” Kimura said of the return to Nashville. “We’ve had so many away games, and that means we have home games left. Now we can be excited to go back there and play in front of those people, so we can’t wait.”

First, though, the trip to the Nutmeg State is suddenly looking a little trickier than it did a few days ago. Athletic knocked off Saint Louis FC to earn its first home win – and second overall – Saturday, so the expansion club may just be finding form at the right time. Nashville will visit Rentschler Stadium at 3:00 p.m. EDT (2:00 in Nashville) Sunday afternoon, trying to climb closer to the top of the East.