It’s Round Three time, folks. Nashville SC had a tough battle from USL2 side South Georgia Tormenta FC 2 in its second-round debut. Can they exorcise demons of a couple different forms in Murfreesboro tonight?

Charleston played a major switcheroo on Nashville last time these two teams squared off: the Battery had gone almost exclusively four-man backline through their first five games, but busted out a 3-4-3 to take on the Boys in Gold. They’d used primarily that tactical approach in 2018 (and have used it exclusively since), but it still caught Nashville by surprise, and given NSC’s difficulties breaking down such formations – dating back to the genesis of the professional franchise – it worked well for the Battery.

“I’ve always felt that the back three that Charleston played is a difficult one to play against,” said Nashville SC head coach Gary Smith. “It does present something very unique in a game, with wingbacks. We suffered at their place because of it: if I remember rightly, their left wingback scored the opener. So we’ll certainly be better prepared for that, and hopefully we can take advantage of whatever comes our way.”

Charleston took home a 3-1 win with wingback Jarad van Schaik notching a brace on an incredible volley and a free kick,

Here’s what I wrote about the game in its wake:

If they couldn’t do it, who can?

Still, the way in which Nashville SC lost Saturday evening against the Charleston Battery was disconcerting. The Boys in Gold conceded early, and were down 3-0 before a late penalty kick from Daniel Ríos provided a bit of consolation.

“I think it goes to highlight the competitive nature of this league,” said NSC head coach Gary Smith. “Lot of lessons to be learned tonight. We can now try and pick through what was a very disappointing night. You win silverware when you are consistent. They, I thought from the outset, looked sharper. With a slightly different shape they got the better of us through the first 15 minutes, and they scored from a terrific strike. From the midway point of the first period until they scored the second goal, we had a really good spell. We failed to be a serious threat to their goal.”

“We had our chances; we created some momentum,” explained midfielder Michael Reed, the team’s captain. “They did well at home. They put away goals. Hats off to them.”

While Nashville SC outshot the Battery 13-12, their accuracy wasn’t able to trouble Charleston keeper Joe Kuzminsky, with only three of those (including the penalty kick) on the frame of the goal.

Meanwhile, the defense was uncharacteristically poor. Nashville had conceded zero goals from the run of play on the young season (two from set piece situations), and gave up two – and another set piece, for good measure – to a Charleston team that hadn’t put up three goals in its previous five games.

Some of the issues from that one were simple brilliance by van Schaik, who I specifically mentioned in the game preview as being a good defensive option, but a lesser one on offense. Oops:

van Schaik runs into the space that King would otherwise be covering, sprinting past a ball-watching Kharlton Belmar in the midfield. Woodbine hits the cross – whether he’s trying to hit striker Arthur Bosua or sees the run from van Schaik turns out to be meaningless – van Schaik sees the ball bounce once in front of him, and swings through the half-volley, burying it upper-left corner.

I’ll assume Charleston wants the Cup badly enough to go with a full-strength lineup this evening. They do not have a USL Championship bye this weekend (unlike Nashville), so they could be forced into a bit of squad rotation, but as the most recent team from outside of MLS to make the final – they lost 2-1 to DC United in 2008 – there’s certainly a history and pride to play for with this club and this tournament specifically.

They’ve rotated a bit in the past couple weeks, with centerback Taylor Mueller getting his first rest of the season Saturday against Atlanta United 2, and van Schaik playing the past couple games in that back three (rather than as a wingback) as others have had the chance to rest up. Other parts have been completely consistent: Tah Brian Anunga and Vincenzo “Orin Incandenza” Candela have settled in as the primary defensive midfielders (come for the soccer, stay for the Infinite Jest references). Kotaro Higashi and Zeiko Lewis are locked in as the wing forward starters.

Arthur Bosua earned his first start (and to date only goal) of the year in the game against Nashville. He also started the next four games, but with the return of Ian Svantesson from injury, he earned the start against Atlanta over the weekend (he also played in the US Open Cup game a couple weeks back), while Bosua wasn’t even in the squad. I would expect to see the massive (6-5, 200) Swede – OK, he’s actually American but still – in the lineup. Surprisingly, he hasn’t scored with his head in two years with the Battery, but nearly half his 2017 goals with Tulsa (5/11) were nodded home: he is an aerial threat. 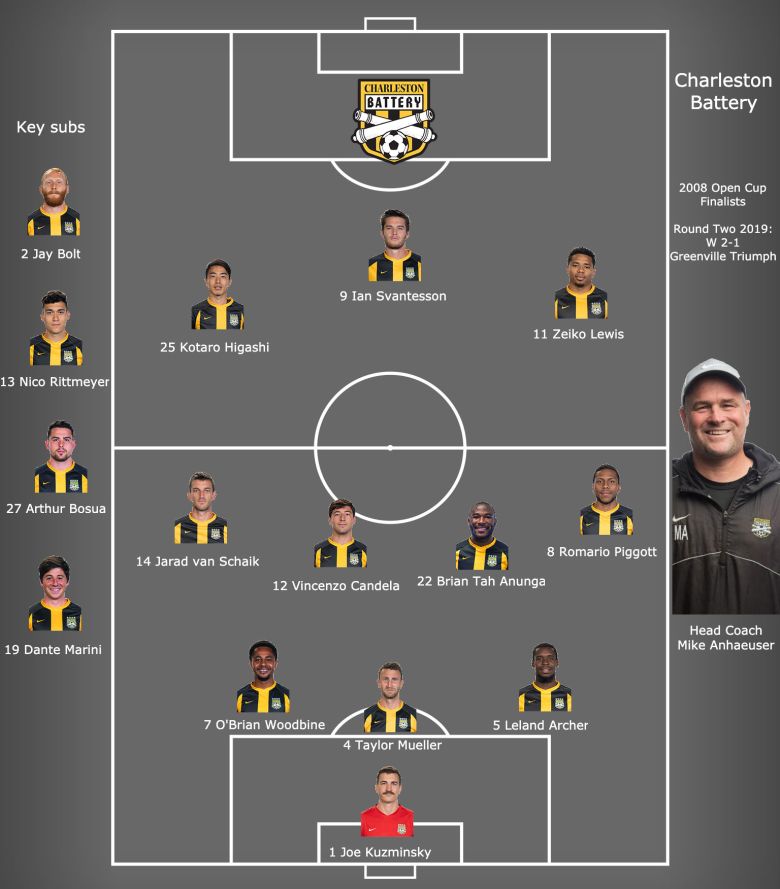 Nashville SC does not release an injury report for Open Cup games – they’re only required to in USL play – but we’ll continue on the operating assumption that Cameron Lancaster is unavailable until proven otherwise, with Michael Reed (who missed out completely on the Indy Eleven game) not 100%, either.

Gary Smith has a tendency to roll with a defensive formation against teams who are offensively-challenged but very good (see: Indy Eleven, Pittsburgh Riverhounds games), but Cup play is an entirely different story: there’s no draw to play for, and a winner is required.

“After 75 minutes of tough, physical activity and maybe having missed one or two opportunities, I felt it was important that we came away with something, rather than nothing,” Smith admitted of Saturday’s game in the Crossroads of America. “Whereas tomorrow, it is either something or nothing: you’re either in or you’re out.”

Because of that, I think we’ll see a hybrid between his more ambitious tendencies, with a 4-2-3-1 formation, and his conservative ones, going with the players he has known and trusted the longest at key positions (namely: fullbacks, and I would say CDMs if not for Michael Reed’s unknown injury status). That’s pretty close to what I consider the first-choice XI at this point in the year, give or take some additional shifting at the positions mentioned above.

“The way that the side set up at the weekend meant that there were certain individuals that probably weren’t going to get in that group anyway, because we played with three centerbacks and wingbacks: the wide players were pretty much on the outside looking in on that one,” Smith said. They probably needed a rest as well.”

With Winn, Belmar, and Ríos not in the starting lineup (and only the latter pair making substitute appearances in the token attempt to find a late-game winner against the Eleven), it’s pretty clear who that applies to.

Assuming the two-on, two-off keeper rotation continues, it’s a Connor Sparrow game, and with Charleston’s size at striker no matter who they choose to put up there (Bosua is also massive, at 6-4, 201), you should see Liam Doyle and Ken Tribbett back there – though they’re obviously the top options in a two-centerback system, anyway. 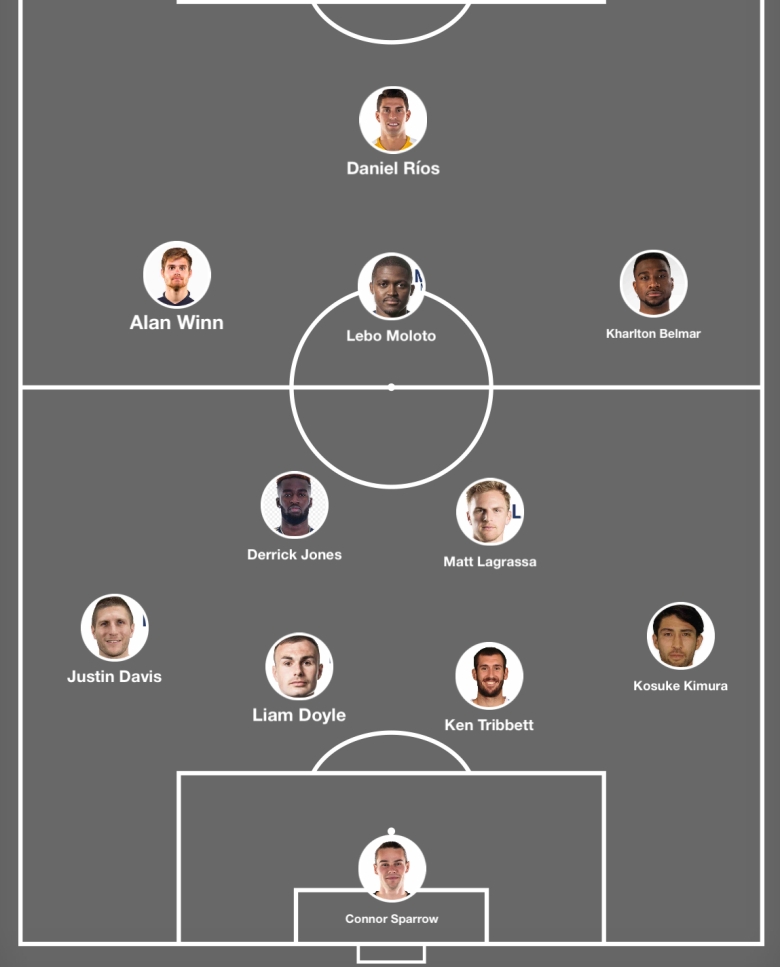 There is also something to be said for just grinding through this game and then having time to rest, too. It’ll be No. 8 in 26 days (that’s one every three and a quarter days!), and the team finally gets a break until June 1 afterward. That doesn’t mean they’ll sleepwalk through this one, but certainly they don’t have to think about also keeping energy in reserve for the weekend.

“I mean, it’s important to recover, to get the body right,” said Tribbett. “We actually have a lot of services here that we use: cryo, we’ve got lots of massage things that we use. We’re able to recover well, but it’s nice: there’s nothing like time. Time always is much-needed at this point.”

This is a team that talks the talk about being ready – and has walked the walked in league play – but there’s also no question that getting through this one and having a couple days off will be helpful.

I asked Gary Smith about a revenge factor and he insisted there is none, but did admit that there are some “corrections” to be made for the previous game – and it didn’t seem like he meant tactically.