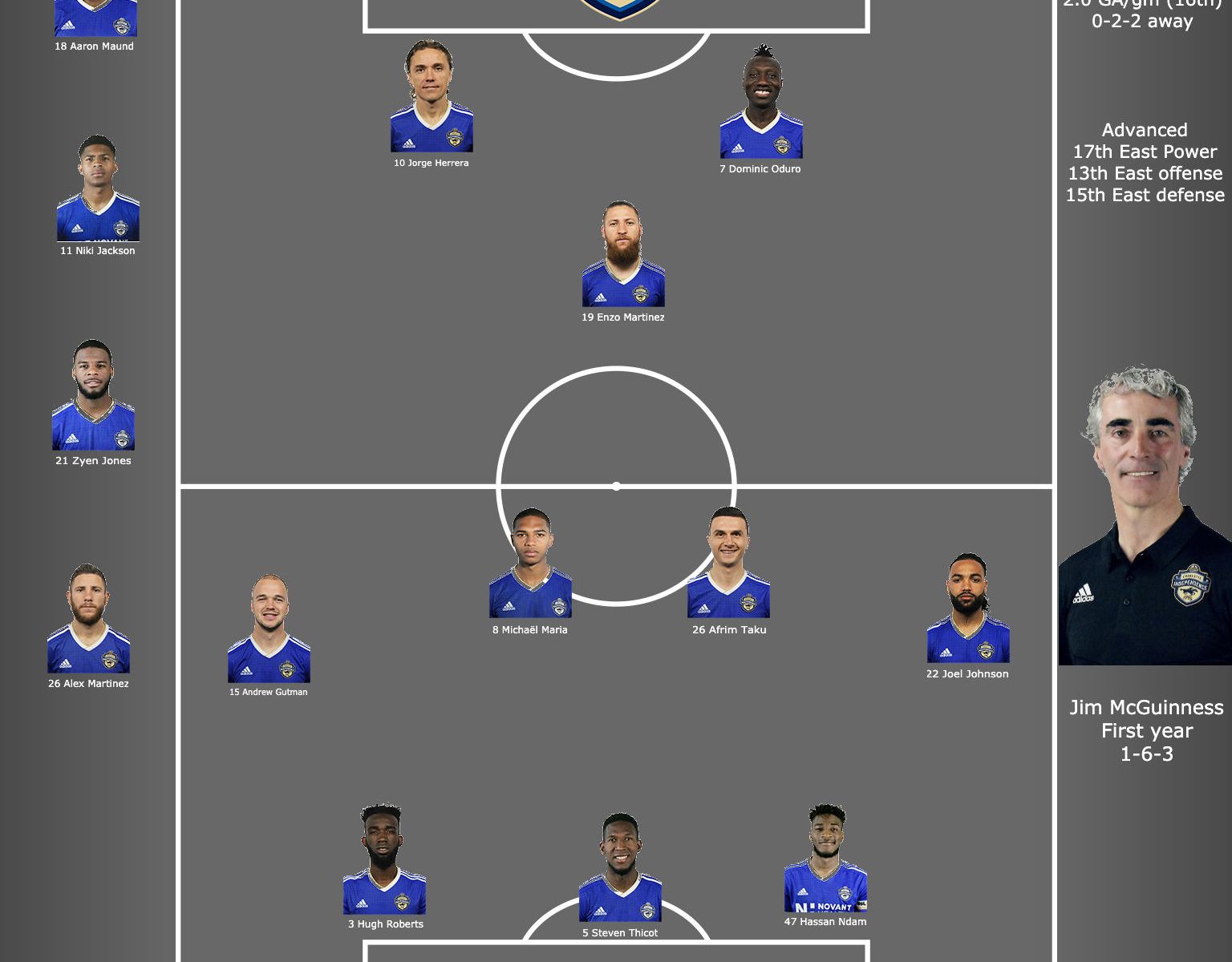 Nashville SC has a chance to find a run of form. Can they take care of business against Charlotte Independence to get the ball rolling downhill?

This is a bad team, but to be fair, it wasn’t a ton better last year, and still managed to beat Nashville SC twice. This is a different Nashville SC team, but I certainly understand just a bit of trepidation. Charlotte has the 26th-best offense in the entire USL and 29th-best defense, so they’re really not getting it done on either side of the field. Their lone win came against a struggling Bethlehem Steel side, and they have draws against Atlanta United 2, Hartford Athletic(!!!!!!!!!!!!!!!!), and… Tampa Bay? On the road? So certainly there’s a little magic in the side if you don’t show up ready to play.

“For whatever reason, things are not going their way at the moment,” Nashville SC head coach Gary Smith said. “Why? When they’ll turn it around? Not for me to really discuss. What I do know is when I look at that group, they’re certainly not to be taken lightly. There’s a lot of talent in there, and if at some point they do start to find the right chemistry, they’re going to be very very difficult to play against. What we have to make sure is it’s not this weekend.”

Charlotte has tried a few different things tactically as first-year head coach Jim McGuinness tries to find the winning recipe: last week was their first foray in a 3-4-1-2 formation after previously trying the USL-standard variations on 4-4-2, 4-4-1-1, and 4-2-3-1. Was that a permanent change? Or an attempt to bunker for a draw against a mediocre Loudoun side in bad weather? We won’t know until the team lines up tomorrow, but I do think they get more out of a few of their guys with the formation switch.

One of those beneficiaries is a familiar name to Nashville SC fans: ephemeral loanee Andrew Gutman landed with Charlotte (McGuinness has consulted with Celtic FC in Scotland, which holds Gutman’s rights, so there’s a connection). He’s a talented left back, but more so going forward than as a pure defender. The three-man backline frees him up to be a little more offensive and requires a little less out of him defensively. He’s been playing well, though.

“Gutman has been the one bright spot in a Charlotte’s otherwise abysmal campaign,” The Charlotte Post‘s Ashley Mahoney told me. “[He] came in fit and hungry, looking to prove that he belongs in Scotland, not in Charlotte. While his presence makes those around him better, one would be concerned that seeing extensive minutes with this squad will not help his development. Any personal growth in his game will have to come from his individual will to develop as an outside back.”

That’s positive for Gutman – and I think all Nashville fans are happy to see him do well – though maybe not so much for the Independence.

Two other guys who I think are well-served by the formation change: midfielder/forward Enzo Martinez, who is one of the USL’s great goal-scorers (his 16 tallies during the 2017 season is No. 13 all-time, and before last year’s goal-a-palooza it was seventh) and spent last season with the Colorado Rapids, is a natural scoring attacking midfielder. Ageless (a word which here means “38-year old”) striker Jorge Herrera is at his best playing off a target striker. There’s a bit of overlap in those responsibilities in typical four-man backline formations. Dropping Martinez into the “1” of 3-4-1-2 while still giving Herrera another striker to play off of is the best of both worlds a bit.

I would not say it’s gone super-well in its extremely short shelf-life though, primarily because Martinez is not having a banner year.

“He leads the team in assists [with three], but for a squad that fails to produce in the attacking third, that means little,” Mahoney said. “His role at present consists of trying to pull the strings more than being the one putting the ball in the back of the net.”

Herrera and Gutman have two goals apiece, and that target striker, Dominic Oduro, has four. He’s an MLS lifer, with more than a decade in the league, but he had only 10 combined appearances between the Montreal Impact and San Jose Earthquakes last year, and didn’t notch a goal. He can still be productive at the USL level, but the pieces – talented though they may be – haven’t clicked offensively just yet.

The backline is a mess, with the East’s second-worst goals conceded number, and the advanced stats only a little kinder (adjusting for strength of competition played, they’re fourth-worst in the East). The Gutman walkabouts I alluded to above have been a problem: watching film of the Independence, the left winger has had to come back and cover for him a lot while he’s upfield offensively. Against Loudoun United Saturday, it pulled central defensive midfielder Michaël Maria wide a lot, which negated some of the numerical advantage that is gained by playing three center backs.

This isn’t a team that’s well-drilled enough to have a player of Gutman’s style at fullback or wingback, it seems… but at the same time, they’re also not talented enough to not play a guy who’s probably their best player (and considering the other options in that competition are in the 29-38 range, certainly the best prospect).

It’s been a rough go for both keepers, though it appears youngster Curtis Anderson, an 18-year old in his first pro season out of the Manchester City academy, has seized the gig. He’s only saving 60.9% of shots faced, and that’s still improvement.

“McGuinness started USL veteran Brandon Miller for the first five games,” Mahoney said. “Miller conceded 11 goals with a rotating back four in front of him. McGuinness put 18 year-old Curtis Anderson in for his first professional start against Bethlehem, their only league win. The former Manchester City academy player has retained the job since, allowing nine goals in league play.”

Certainly it seems like the upside is greater there, though the team in front of him isn’t helping.

I think the 3-4-1-2 is something that Charlotte can build around (they also used it, albeit with a major shakeup in personnel, in their Open Cup flop Tuesday), and here’s what I expect to see: 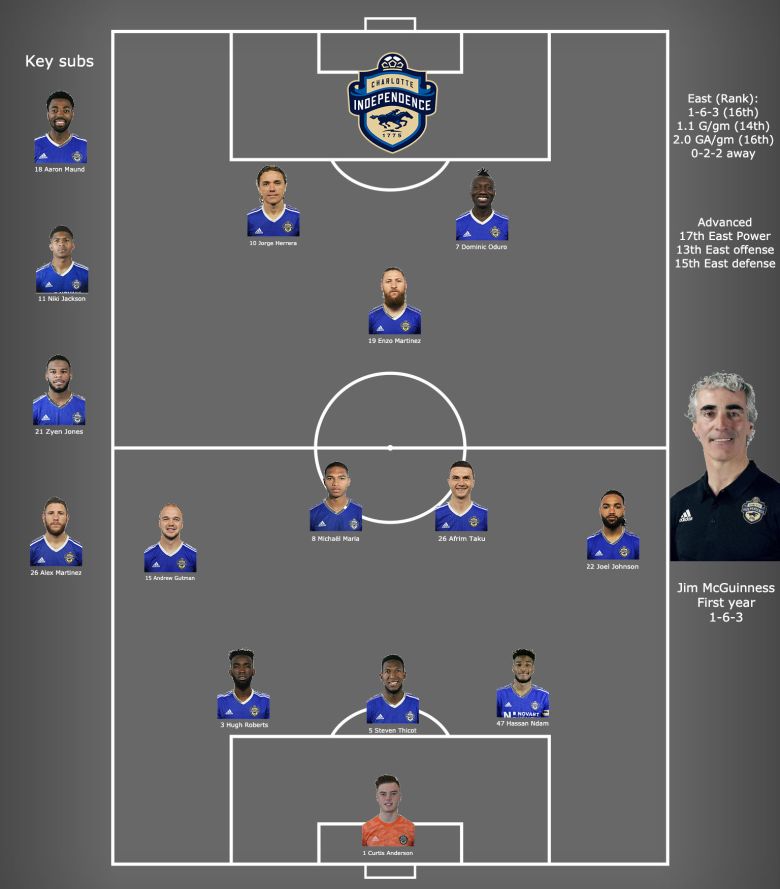 They’re still feeling out role, particularly on the backline (which sees the most change to its individual responsibilities, has a young new guy in Hassan Ndam, and is the worst unit). Any variety of players who have gotten time, including Maund, could be back there.

Nashville SC’s injury report is clean, but head coach Gary Smith told assembled media that Cameron Lancaster is unlikely to play after taking a knock later than the report’s being turned in to the league office.

The carnage in the above section reads more like a post-Dracarys King’s Landing (I have all the pop culture #references) than a USL team that’s going to do big things this year. It stands to reason that this turns out like more of a man-v-self battle for Nashville SC.

“The games where we’ve fallen short, I think we’ve learned a lot from,” said Smith. “The team and the players are in a good place, we have the opportunity to rotate whatever bodies we need to, we’ve got a very, very strong group, and we’ve also got players that are fully engaged and enthused, and obviously keen to impress at all opportunities. That in itself makes for a very good environment.”

The Boys in Gold, to be fair, did not win every man-v-self battle last year (including two in Charlotte), but that certainly sounds like a team that is in the right place mentally to get a job done. It’s also a much more talented team, particularly in the scoring department, whether or not Cameron Lancaster is available, which we’re told not to expect.

“Charlotte was the last game of my last season with North Carolina, and I scored two goals. That’s good,” he said with a laugh. “One was a beautiful goal with a chip with my left foot. It’s a good, god feel for me. I have good memories. Also I think I played one of the first games [of the year] over there with Charlotte, and I also scored a goal, so I feel good.”

Especially given Lancaster’s lack of availability (without even taking into account that I, a soccer genius, think it’s the team’s best formation), a 4-2-3-1 is probably on deck here. The keeper rotation has become obvious by this point in the season, with Matt Pickens and Connor Sparrow each playing two games straight and then switching, so we’re on game two of a Sparrow cycle. 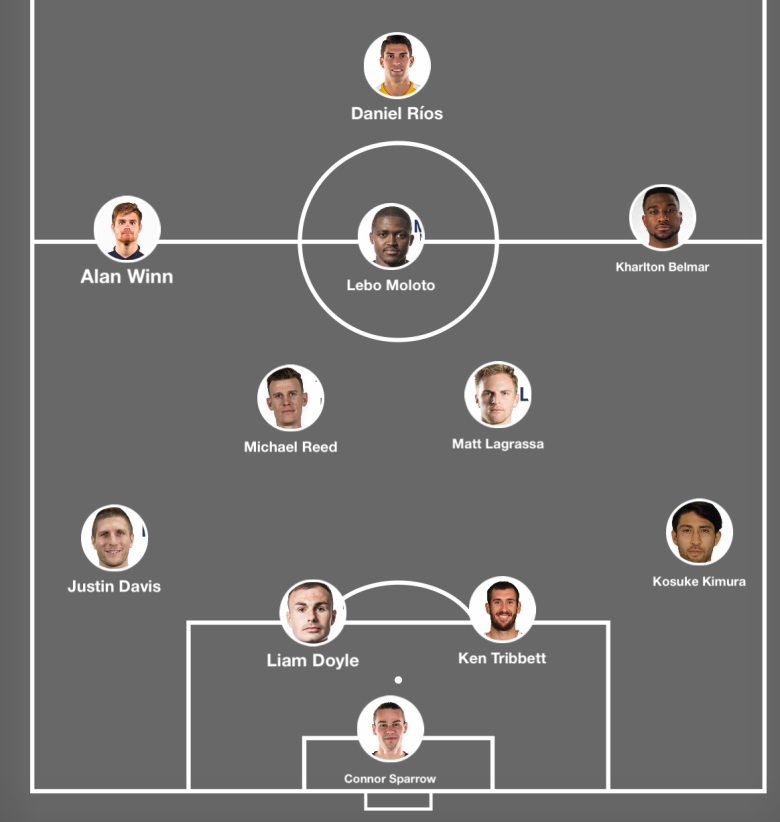 I’m going to predict that otherwise, the lineup we saw against Swope Park Rangers is the way to go. I would figure out a way to get Derrick Jones into the starting lineup, but the future (uh, and past, with the Philadelphia Union) MLS player missed training today as he finds living accommodations in his new city, and missing a Friday probably makes it tough to have him in the lineup. Smith implied that he’ll be in the bench.

“Derrick’s got some relocation stuff to deal with,” he said. “He should be back here tomorrow and will be available for the 18.”

That reads like a very specific and narrow possibility, precluding both a status outside the gameday squad and being in the starting XI.

The rest should be the same we saw Saturday, with Alan Winn finding even better form in the midweek win against South Georgia Tormenta FC 2, and Kharlton Belmar’s ability on the ball… a very exciting proposition against a left back not known for his defense.

Charlotte is bad. I do think they’ll be able to improve going forward, but Nashville is catching them in a transition state as they try to switch up formations. They lost to a men’s league team on Tuesday, so…

The game ends in a 4-0 Nashville victory.