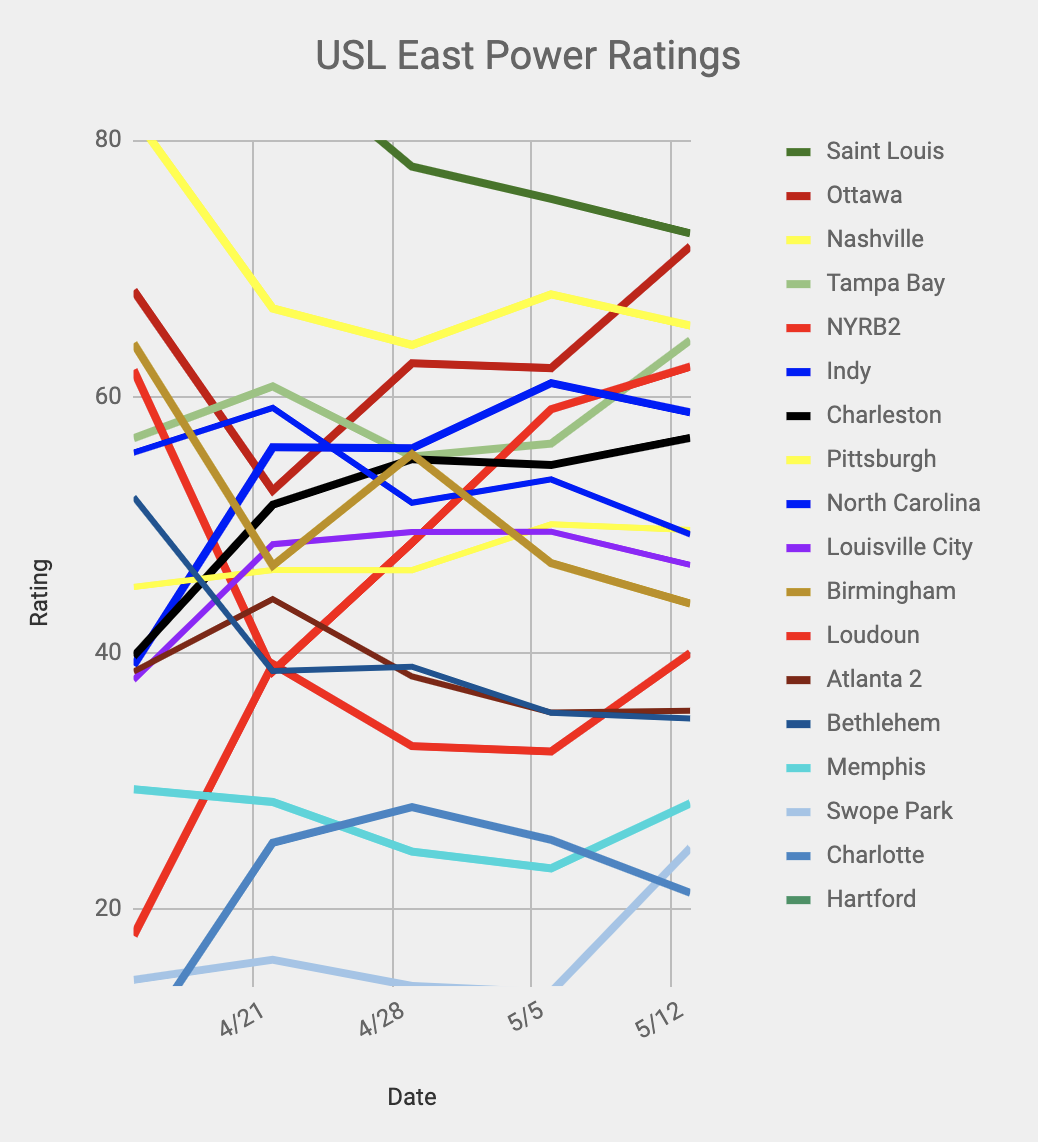 Welcome to the USL power ratings! Herein, I’ll give weekly updates on the Eastern and Western Conference with a projected final table. When there’s enough data, I’ll expand the variety of rankings available.

This rating method combines points per game with the quality of opposition played. It’s best used as a proxy for how the table will play out at the end of the year. It’s still a little jittery, but getting close to what you’d expect going forward (if teams achieve expected results – which we all know doesn’t happen consistently). There’s still a lot of season – 72.9% of it, to be precise – to be played.

I RUTHLESSLY chopped Hartford off the bottom end of the graphic so it’d scale much better with Swope gaining more than 10 projected points (WOO, first win!) to create a lot more distance between worst and second-worst. The weeks where Saint Louis’s number was unsustainably high are also more scaled out than previously (and within two weeks, the past-5 will only include data where they’re in the 70s, anyway).

The big story in this edition is probably Ottawa, which used a four-point week against two very good teams to jump Nashville into second position – and come within a point of Saint Louis. They’re in a similar situation to NYRBII (the team against whom they picked up the draw) in that they’ve taken care of the dregs of the league and gotten decent-not-great results when the level of competition has been tougher – and they’re tied for fewest games played, so there’s a little more noise in the data – but you can’t fault them for mostly getting the job done.

Nashville-Tampa-Red Bull-Indy-Charleston is looking like that next tier of teams that look assured to make the playoffs if current form holds, with Pittsburgh-North Carolina-Louisville currently occupying spots 8-10. The Riverhounds are trending up, while Louisville looks to have plateaued a bit (and after their start to the season, not a great status), and North Carolina is firmly on the way down. Fortunately for both of those teams, Birmingham is the only side within striking distance so far, and the Legion are also trending down.

I’ll be interested to see if that next cohort – three MLS2 sides – get a boost with the MLS trade window closed. Loudoun has already improved its play dramatically, while Atlanta and Bethlehem have been reasonably steady in the form they’ve held for most of the year. Getting a boost from some first-teamers who aren’t regularly making 18s could be helpful (but at the same time, Bethlehem in particular will lose some players as the Union look to fill holes left by the U-20 World Cup).

A few major shakeups in the West. Austin got some help from the out-of-town scoreboard and beat OKC to make a nice climb. OKC took the other end of that, dropping a handful of slots.

From 10-15, things were pretty wild. I’m beginning to think… Phoenix and Orange County may just not come close to preseason expectations for them? Even if they sneak into the playoffs (as they’d have to do, based on current form), that’s probably well below what anyone thought coming into the year. Sacramento has dropped like a rock lately and sort of falls into that category as well, but their tumble has been more a temporary (or possibly temporary, at least) situation, rather than a “this is who they’ve been all year” situation.

Vegas and RGV are slightly ahead of expectations, though Vegas in particular seems prone to dropping right back down at any time. Like I was in the East last week, very close to dropping Tacoma off the bottom end of the chart, because there’s a sizable gap between them and Colorado Springs. If the Switchbacks manage to widen that margin (they play New Mexico next weekend while Tacoma takes on Reno), I’ll probably bump S2 off the bottom.