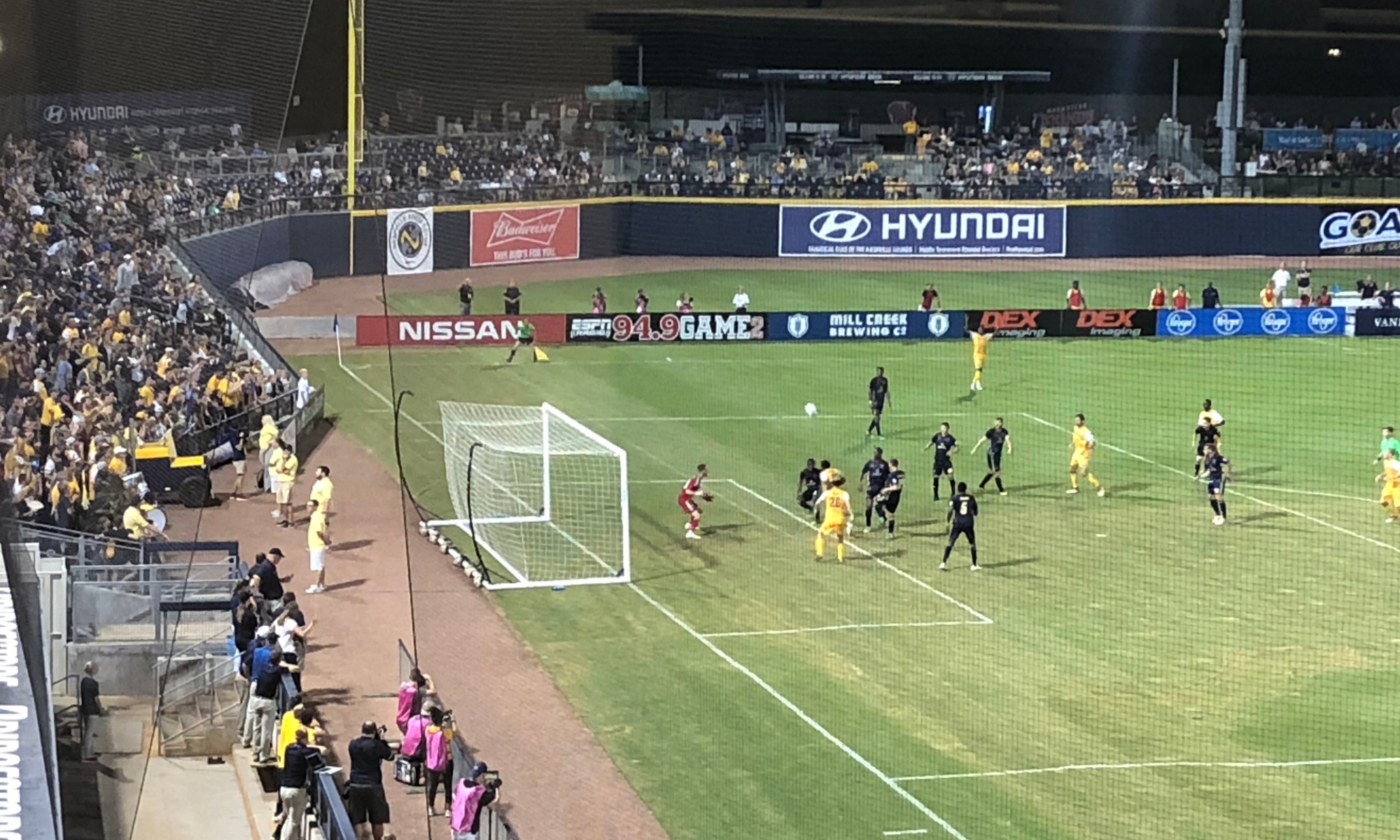 Before getting into the final run-of-play preview piece (you know, the one people are most interested in), let’s take a brief detour and take a look at Nashville SC’s set pieces – offensively and defensively – heading into 2019.

The setup here was pretty simple last year: there were just a few kick-takers, with Michael Reed most common among them, Taylor Washington, Justin Davis, and Alan Winn the most frequent outside of that.

If Nashville was trying to score from a free kick, it was typically Reed launching one, or laying off to another shooter (Liam Doyle scored against Charleston Battery on one such play) to launch one past the wall. If it was an attempt to score indirectly – aside from that layoff pass, technically an indirect kick – you’d see Reed or one of the other three primary kick-takers serve it high, where strikers and centerbacks (and also the tall, jump-capable Bolu Akinyode) would try to either score with the head from just outside the six-yard box, or serve it back across for a teammate to finish. You may or may not recall this particular play:

That was a fairly standard play, albeit with a better-than-standard outcome. The concept was the same on corner kicks, for the most part, though NSC liked to alternate between in-swingers and out-swingers, and was more married to the idea of the first head to get to it being tasked with actually getting it into the net.

This worked OK generally, but Gary Smith pretty regularly referred to his team’s need to be more effective on set pieces. So what can we expect to change in 2019?

For starters, it appears that the high-profile striker signings, Daniel Ríos and particularly Cameron Lancaster will be the shooters in instances where NSC is going directly for goal. Lancaster scored on a layoff from Reed inside the box on an indirect free kick against Lipscomb, and he was the man tasked with shooting (he missed the upper corner of the net by about a foot high and two wide) from just outside the box against Indy Eleven. Four of his 26 goals last year were from set-piece direct kicks, so it’s well within his wheelhouse. I would guess – though we don’t have any evidence just yet – that he’s the primary penalty taker when on the field, too.

As for the less direct method of scoring from set pieces, well, Nashville also added one of the best in the league in that regard this offseason. Centerback Ken Tribbett nodded home four goals last year (he added a couple with his feet, too), and at 6-2, 170 adds another tall piece out there.

As with the transition defense, this was an area in which Nashville SC’s otherwise-stout defense seemed to show some cracks (though of course, even those cracks weren’t particularly damning, given the elite finish of the defense statistically). It’s mostly anecdotal, but a Soony Saad screamer in the first game in Indianapolis (don’t think Matt Pickens was the only one he did it to, either, although this one didn’t quite dip in time), a free kick curler from Daniel Ríos – I wonder where he’s suiting up this year – in the second game against North Carolina FC, a failed clearance from a corner against FCC… heck, even if you are citing anecdotes, those three alone account for nearly 10% of the goals Nashville SC gave up all season.

So what I’m saying is there’s a bit of room for improvement. Part of that improvement should come from Nashville SC pressing higher up the field: if they’re committing fouls on defense, they’ll be farther from the goal, and opponents won’t have the chance to try to score from the set piece. Some additional size (in the form of Tribbett, primarily) will also help in building a defensive wall.

I also think – and I’ve pointed it out a few times in the past – that fatigue for Pickens played a role later in the year (two of the above three goals took place in the final quarter of the regular season). Having a better backup in the form of Connor Sparrow will definitely help keep both of them fresh for a greater proportion of the year.

There’s also something to be said for Sparrow’s different goalkeeping style including some bonkers reflexes. He may end up being able to handle free kicks even better than the typically-strong Pickens when he gets his playing time.

As mentioned above, this was an area that Gary Smith talked about wanting to improve (more on offense than defensively) throughout the course of the season, and it appears that the squad is well-positioned to do just that.

As with other portions of the team, there hasn’t been any area of significant downgrade – though we’ll see if anyone can meet or exceed Brandon Allen’s perfect 3/3 on penalty kicks – and other aspects look to have added either external talent (as tends to be the case when you add the top two goal-scorers form last year’s campaign) or simple experience and team chemistry.

The preference would be for the Boys in Gold to not rely on set pieces to generate too much of their offense, and for them to not have to defend too many on their own end. However, they look well equipped to exceed last year’s performance in both phases.