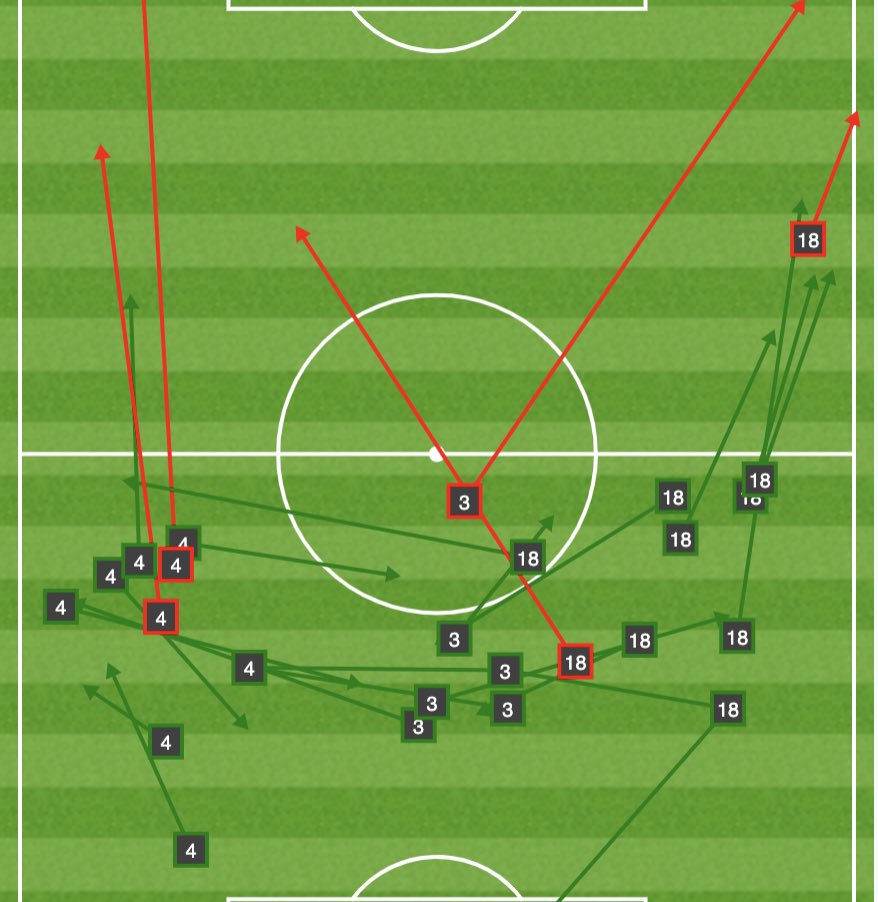 Welcome to The Graphical, wherein I dig into some of the Opta data to get some insights about recent Nashville SC games. Today, it’s a gutting loss in Kansas City.

Down a man… not that bad?

I’ll be honest, I went into this particular piece of exploration with the idea that I’d be able to say, “see, the defense just collapsed when Nashville SC went down a man.” Surprisingly, that’s not at all what I found. Even keeping in mind that scoring (and to a lesser but still great extent, shooting) are low-trial, high-variance events in soccer. The shotmap after Nashville suffered a red card to Alistair Johnston doesn’t look much worse than that before:

Before I begin, it’s worth noting that Nashville SC’s defense was borderline dominant before Gerso Fernandes’s goal (a very, ‘other than that, Mrs. Lincoln…’ moment, I’ll admit).

That said, even when Nashville went down a man, the defense didn’t collapse. Certainly Sporting Kansas City had more shots, but they were generally from pretty poor positions, and very few of them troubled Joe Willis at all. Giving up just three shots inside the penalty area with a 41-minute man-disadvantage isn’t half bad. (To be fair the two that didn’t result in goals were pretty scary moments).

It wasn’t up to the level that it was with a full lineup, but that’s what you’d expect. Taking into account that Nashville SC had to sub Defensive POTY candidate Walker Zimmerman out to avoid injury – he’d also go on to miss this week’s Houston game – and it’s not the worst outcome in the world.

All that said, the danger that SKC created may not have been particularly scary on an individual, shot-by-shot level. Even the one that went in wasn’t a particularly dangerous-looking shot. But there’s a reason that the xG values on ridiculous attempts are .03, .05, .07 (which is about where the Hurtado goal was), rather than zero: some of ’em go in.

The offense, on the other hand…

Behold, the entirety of Nashville SC’s passmap after the red card:

While a man down, Nashville SC attempted exactly 100 passes, and completed just 68 of them. As you can see, none of those 100 were attempted within a dangerous area, and none of the 68 were completed to a player in a dangerous are, either. Meanwhile, SKC completed 222 of 255 passes over the same period (87.1%), giving them over 70% of the possession.

It stands to reason that a big part of Sporting Kansas City’s increase in shot-taking after the red card was less about the NSC defense allowing more shots with what SKC was doing, and more about SKC having opportunity to just do more of it. The Man City-style “defend by possessing” was not an available tactic with the disadvantage. With that in mind, the fact that Nashville gave up very few good shots is impressive. The offensive end of things… not so much.

Prelude to a shape change

Once Nashville had to deal with its various personnel issues (Johnston dismissed, Zimmerman removed to avoid injury), there was a clear move toward a back three/five. Dave Romney continued his typical left CB role, Jalil Anibaba played in the center, and rookie Jack Maher was on the right once the dust settle for the final 19 substitute-free minutes:

Prior to Maher’s insertion, Romney and Anibaba played as a normal centerback pairing with Dan Lovitz and Eric Miller flanking them. Meanwhile, you can clearly see Romney (4), Anibaba (3), and Maher (18) in the roles that they’d reprise a few days later for the win over Houston Dynamo.

Nashville SC was heavy in the three-man/five-man backline game early in the 2018 season, but over the course of that year, Gary Smith switched to variations on the 4-2-3-1/4-4-1-1 and 4-3-3 we’ve seen almost exclusively (aside from situational use of that back three) ever since. It’s a system he’s comfortable with, though obviously one that isn’t as well-drilled given NSC has been running an even backline for the better part of two years – and the players who have joined in the MLS era have basically never run it under Smith’s tutelage.

The above two headings can sort of explain away why it only worked moderately well (I don’t know how you would have gotten to this point in the post without having read either of them, but the tl;dr version: playing a man down is hard). You can also see why it’s set up to be a good counter-attacking setup, and of course, how Nashville’s use of it Sunday set up for success on Wednesday.

Leal starting to break out?

Let’s go back to the good times, the before-red-card times. On the heels of a solid game against Minnesota United, attacking midfielder/winger Randall Leal had yet another good outing. This… has not been the case over the course of the entire year. Of course, past criticism (and Leal has been deserving of plenty) does not necessarily imply a prediction of future struggle. We saw Wednesday that Hany Mukhtar – who has similarly struggled this year – was able to put together a great game.

Leal is starting to piece together the behind-the-scenes pieces for solid performances. Even if his improved play isn’t showing up much on the scoresheet, he should be building toward just such a breakout.

Gary Smith has mentioned (in fairness, asking when-prompted is a different story than bringing a guy up out of the blue. It’s still better than having nothing positive to say) Leal’s play in the past couple postgame press conferences. Here’s what he had to say after this one:

“I thought he was extremely bright: showed plenty of energy,” Smith said. “In many ways, I think he was inspired by his role, and his performance, during mid-week [against Minnesota United]. He enjoyed playing in that more central role. The plan was, at some point, to get him back into that pocket. And you know, hopefully show the same sort of signs.”

His passing was clean – which when comparing to his previous games probably means improved decision-making rather than any improvement from a technical standpoint – and when he wasn’t completing them, it was because he was trying to be progressive or move the ball directly into a scoring position. The lone exception was his literal first touch of the game (the red square along the right side there), which was actually a failed control of a 50/50 header than an actual passing attempt.

Leal does like to get into central areas, as I’ve noted previously, and it gives him a little more opportunity to just play, rather than overthinking things out in space. Of course, this can make him a little redundant with the likes of Hany Mukhtar or even Derrick Jones when Nashville can field a full-strength lineup. Putting him in those central areas to coax solid play out of him, then getting him back on the wing to produce, probably seems like the best long-term plan.

The last little bit about Leal’s play is one that remains an issue. He does not get into good shooting positions often, but is a dude who loves to shoot. Here’s his map for the whole year (his lone goal is in yellow. For the sake of #branding, we’ll call it Gold):

Yes, shooting from outside the box or from a tight angle is sort of the nature of being a guy who plays wide. But he’s a goal-scorer at heart. I do wonder if – almost like playing him in central attacking midfield can improve his play along the wing – drawing up some plans to specifically get him looks in a good area could help improve that decision-making and ultimately, conversion.

As always, thanks for reading. Please feel free to share on social media, where you can always hit me up for a chat, as well. Poke around the game data to see what you find.