With two games in five days (six if you count Monday morning!) against the same opponent, let’s mash the two statistical/visual pieces together to not just learn about Nashville SC, but learn about the differences between back-to-back games.

This is The Graphical, wherein I mine the Opta data for insights into the latest Nashville SC result(s)

A better performance, a worse result

While Nashville SC earned the win and three points Wednesday evening – and came away with just a draw on Sunday – the feeling was much more positive after the second game. Certainly some of that is the relief of finishing off a two-game road stand (against what should be a solid Dallas team) with the four points in-hand, but it’d be fair to say that Nashville SC also had an actual stronger performance in game two, even if the Boys in Gold weren’t rewarded for it.

Here are FC Dallas’s shotmaps from the two outings:

It’s easy to see a difference using the eyeball test: FC Dallas got off many more shots, and largely from more-dangerous positions in the first game. Joe Willis made five saves in the shutout. He only had to make one save (as you can see, from well outside the box) to earn a second clean sheet against FCD.

Meanwhile, the script was similarly flipped on the other end of the pitch. Here’s Nashville’s shot chart for each game.:

Despite the win, Wednesday was a pretty poor offensive night: just seven shots, five of them from pretty long range. Sunday? 21 shots, eight of them inside the box. The Boys in Gold hit a post and missed a stoppage-time winner by about a foot (and if you consider the length of the shot – that looooooooong red line starting near mid-field – “about a foot” is excruciatingly close).

On a game-to-game basis, the result you get is the one that adds up the times you actually put the ball into the back of the net. In terms of projecting results and performances forward, and determining which is more encouraging for future outcomes, Sunday was your keeper.

Texas two-step. And by “step,” I mean “formation”

FC Dallas’s shift into a 3-5-2 at the beginning of Wednesday’s game was not unexpected. Indeed, I put out a 3-5-2 in the game preview, because that’s what Dallas was very open about playing. It was however, the first time doing so (at least for the majority of the game) under Luchi Gonzalez: his Dallas teams for over a year have played some variation on a 4-3-3 or 4-2-3-1 as their tactical identity.

It’d be hard to call the formation shift a failure, given that neither approach found the back of the net, and the lone goal in the week for Nashville came after the switch back to a four-man backline late in Wednesday’ game. Indeed – based upon the above graphs, you could easily say that the 3-5-2 was much better both offensively and defensively with the limited sample size we had.

I’m most interested in how the formation affected Nashville when the Boys in Gold were on the ball. Once again, multiple maps here. Reds are incomplete, greens are complete, yellows are complete and lead to a shot (key passes), and the blue is Dax McCarty’s assist:

The first thing that jumps out is that, despite the goal scored late Wednesday and the much-improved offensive performance Sunday, Nashville didn’t have an easy time passing in and around the box no matter what Dallas was doing. You can certainly see, though, that Sunday’s performance was the best of the bunch (and the final 22 minutes on Wednesday may get, at best, an “incomplete”).

When the Toros had their three-centerback lineup out, though, Nashville couldn’t even sniff the penalty area. Their penetration into Zone 14 (just outside the top of the box), their ability to generate shooting looks by moving the ball into scoring areas… nada.

Far be it from me to say switching back to the typical formation was an obvious mistake, but Luchi Gonzalez spent five months away from the competition pitch and decided upon a 3-5-2 for his team. He scrapped it after 75 minutes, but it looks like – from a defensive standpoint, at least – it may be wise to resort to the cooler-headed thought process he had over quarantine, rather than the shifts he made more on-the-fly this week.

How Nashville’s goal came about

When you talk to Gary Smith a lot, you’ll eventually get very used to variations one specific phrase, “the most difficult thing to do, which is score a goal.”

So, how did Nashville’s come about on Wednesday evening? I’ll probably give it the Film Room treatment in the not-so-distant future, but here’s an important part of it. The following passmap is of Dallas’s fullbacks, Reggie Cannon (2) and Ryan Hollingshead (12), as the end of the game approached. They’re attacking bottom-to-top, and, well – emphasis on “attacking.”

They’re getting higher and higher up the field – which by the nature of the four-man backline means leaving plenty of space for Nashville to counter-attack into on the flanks. You may recall David Accam collecting the ball near midfield and having acres of space to dribble into with no harassment.

Remember, Dallas had already given up some defensive coverage at the back: by switching away from the 3-5-2 formation, a centerback had come off the pitch for another attacker. With the fullbacks getting so high – and with less help behind them – there was plenty of room for Nashville to hit on the counter-attack.

That’s what happened (again, more to come on the specifics of the goal later in the week).

Less precise, but making up for it

Given the difference between the two games in generating shots, you may expect that Nashville’s offense was more effective in a general sense Sunday. Certainly there are many metrics by which that can be measured (including the shots themselves, in a little tautological paradox), but one facsimile for smooth offense is passing percentage.

A team doesn’t necessarily need to dominate the time of possession, but in their time with the ball, doing what they can to hold onto it – rather than giving it away – is, in the most obvious sense, beneficial. So, you may be surprised to see…

Nashville’s offense, more effective though it was in creating chances, was a lot less careful with the ball Sunday. The trick? So was Dallas’s. Of course, there are obvious explanations for that: a three-plus-hour delay is going to keep players from being their sharpest, and the torrential rain meant a wet pitch and slick ball.

But there has to be some explanation for how both teams saw a decline in passing performance, but it was Nashville whose overall offense improved dramatically (whereas Dallas’s fell off significantly). The nature of the unsuccessful passes tells a bit of a story. Nashville’s were essentially the same across the two nights: long balls up the sideline, and entries into scoring positions (it’s also notable that NSC keeper Joe Willis played long all night Wednesday, whereas there was a little bit more of a “short passing out of the back” philosophy Sunday).

Dallas’s unsuccessful passes, on the other hand, were of two very different natures: 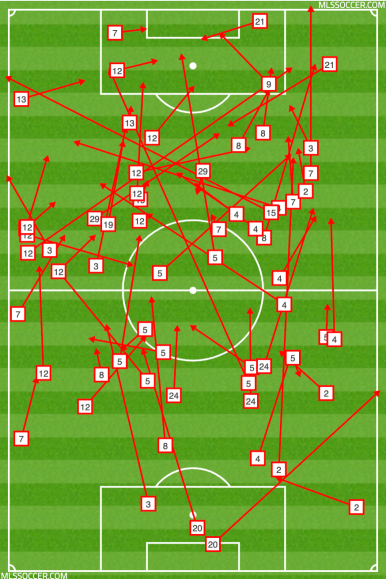 The vast majority of their unsuccessful passes in the first game came as they were advancing from the edge of the middle third into the final third. There was more of the same Sunday, certainly, but they also had a really tough time getting the ball out of their defensive areas. In particular, John Nelson, who replaced Hollingshead in the lineup, and left CB Reto Ziegler struggled.

What did you see in the stats and charts? Poke around the Opta data and feel free to share your thoughts in the comments or on social media.