Welcome to The Graphical, wherein I mine the Opta data for some insights into Nashville SC’s most recent game. The Boys in Gold lost the possession battle, but won the… uh, score war? in metro DC Saturday evening.

Gary Smith went with a 3-5-2 formation, and while there are always some consistencies as to how Nashville will play in that setup, it’s also a little flexible. First off, what we’re used to seeing:

It should come as no surprise, given that I’m characterizing the above, that we didn’t see those things. For starters, the wingbacks didn’t really get forward… and they didn’t sink deep a whole lot, either:

Both of those guys (King at the top of your screen, Washington at the bottom, for the most part) were pretty static in midfield, making for a bit more of a true three-at-the-back – rather than a hybrid three/five backline – formation.

Smith was content to let Justin Davis, Ken Tribbett, and Jimmy Ockford take care of the work at the back, while Washington and King helped the Boys in Gold overwhelm the numbers in the midfield. It worked out well, with Loudoun having 58.0% of possession… but only 11 successful passes into Nashville’s penalty area from open play. 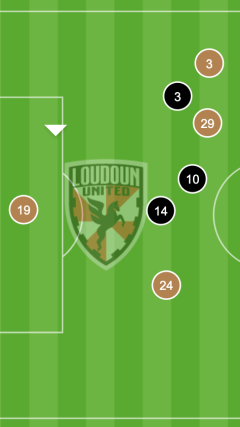 The other aspect of the formation that was a little different than we’re used to? Daniel Ríos played as a center forward, but instead of that meaning two wingers (Ropapa Mensah on the right and Lebo Moloto on the left), Nashville played Mensah wide, while Moloto stayed underneath in the playmaking role as almost a second forward.

This allowed Nashville to overload the right wing in attack, picking on left back Peabo Doue (No. 3 there), who struggled enough in handling it that he was replaced at halftime.

To make the formation more structurally sound, Nashville kept its right-sided defenders (King and Ockford) a little deeper, while central midfielder Matt LaGrassa augmented the numbers on the left side, not necessarily pushing forward to get involved in the attack, but rather replacing the defensive positioning that Moloto would have in a more balanced formation. That also meant LCB Davis pushing a little higher, as well.

Here’s a hybrid graphic with the offensive players’ heat maps, and the back seven players’ average positions superimposed.

You can see the complementary nature of the two halves of the ball. Davis and Washington are in good positions to cover the area that Moloto isn’t able to cover defensively, while LaGrassa provides an outlet for rotating the ball on offense.

All of this seemed to be designed to allow Ríos to be in prime scoring positions while Mensah was on his more comfortable right side to be a bit of a creator, and Moloto had the freedom underneath. 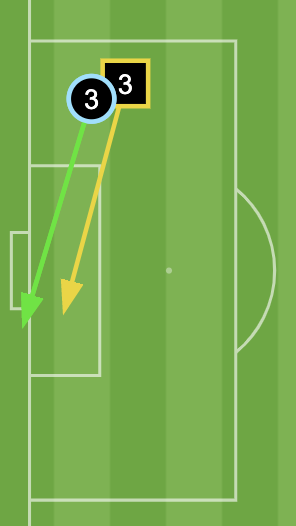 It paid off for Mensah most of all. Of course, he had a goal and an assist on nearly identical shots (I don’t know that he’d admit it, but the assist to Ríos was most definitely an attempt for the same far-post banger that paid off later). However, he did more than that, as well.

He actually had a lefty(!) cross – and a good one, with Ríos’s resulting header barely striking the post instead of finding the net – and the more he can add a left foot to his repertoire, the closer he is to reaching heights that have been predicted of him ever since he scored the club’s first-ever goal in the friendly match against Atlanta United last preseason.

A left foot and 90-minute match fitness (and probably a bit more straight-line burst of speed, which will come from the same sources as that 90-minute fitness – being in better shape) make him not just a guy who fans love now, but one who can make the transition to MLS. We shall see if his game continues to grow in those ways.

His game obviously isn’t perfect aside from those few obvious flaws. For example, his trouble connecting to dangerous areas when he dropped a bit deeper for the ball was part of the reason Nashville didn’t possess much in Zone 14, the dangerous area at the top of the opposing penalty area:

…but given that another reason NSC didn’t possess the ball a ton there was that they were content to bang it to Mensah in that right corner and let the man cook… well, let’s just note that it worked out, and was thus obviously the correct plan.

I wouldn’t have been upset to see Nashville try to muscle Loudoun’s #teens in central midfield (Moses Nyeman and Kevin Paredes combine for 31 years of age and 234 pounds, or “five years younger and 30-some pounds heavier than Matt Pickens, and there’s two of them”), but obviously running the offense through Ropapa worked very well.

Certainly you’d have like to see Lebo Moloto’s early first-touch shot from inside the box at least test the keeper, but taking it without first settling indicates that a couple rough weeks for him shooting-wise haven’t diminished his confidence – and he’s a shooter: eventually those will get a little more dialed in.

The Boys in Gold took a bunch of shots, and while the accuracy wasn’t always there, these positions are good, and the team’s best finishers took literally every single one of them:

That’s efficient offense, and while three of the shots were blocked (Winn’s was sort of just a swing-away moment at the end of a long run with no support arriving), if you can generate this type of shotmap, you feel good about scoring going forward.

Add in some set-piece production (zero shots from centerbacks despite six corner kicks?), and that’s a recipe for getting back to the high-scoring Nashville from mid-season without sacrificing much defensively.

Not a ton to report from Derrick Jones’s return to the Nashville SC lineup. He came on in the 82nd minute, getting about 13 total minutes of playing time, and his total actions are compiled thusly:

Five completed passes, nothing else. It was, of course, nice to see him back on the field (and given how much Gary Smith complains about putting injured players out on FieldTurf, perhaps a little surprising). Check back later – hopefully with a greater sample size – to see how his return to the field is going.

What did you see in the data? Check it out here and share your observations in the comments or on social media.