Welcome to The Wrap, wherein I recap the content from last week’s Nashville SC game. The Boys in Gold won a Battle in the Bay or whatever ESPN-ified nickname you want to give it.

Winger Kharlton Belmar has been forthcoming about how disappointed he is with his statistical output over the course of this season. He’s been more productive lately, but nothing has been as beautiful – or as meaningful – as his counter-attacking volley to give Nashville the lead in the 79th minute.

With an assist from centerback Bradley Bourgeois (another Nashville player who may not be the happiest about how his year has gone, with a demotion from first-choice defender to rotation player), Belmar’s goal is a lock for the USL’s strike of the week, and it may go down as Nashville’s most beautiful strike of the year.

There were not one but two bicycle kick goals last week, so I overstepped on calling it a lock for goal of the week. However, it didn’t even make the top five(!), with a couple really weak contenders thrown into the mix. The league office’s weird and inexplicable hatred apparently extends to the entirety of Nashville SC, not just Daniel Ríos.

The game column with quotes from the postgame press conference provided by the Club:

Bourgeois stepped just over the midfield stripe and launched for Belmar. The striker made no mistake, taking it on the full after a high bounce behind the backline, and beating McCarthy to find the game-winner.

“In the end, that one moment was a real bright spot from Kharlton: an incredible strike, and it wins us the game,” Smith said. “How many times have you seen it, a goal like that separates two very good teams.”

The voting post for your community ratings, and here are the results (don’t forget to vote each game!):

That’s certainly the highest team rating of the year, and I believe the latest someone has subbed into the match and still been named MOTM (at least so far in 2019).

Check out [the Tampa] front three’s passing success through the course of the game: 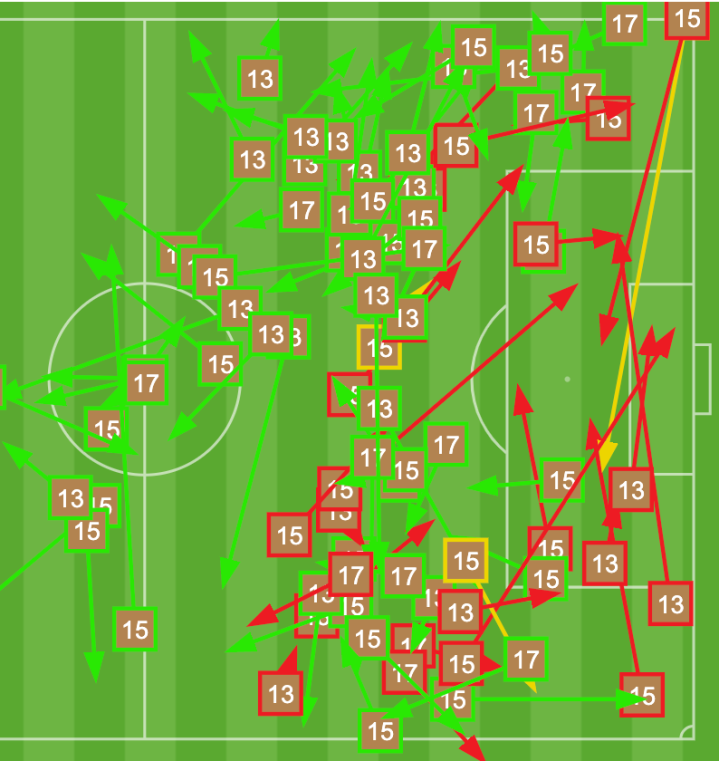 Their attacking right side (the defense’s left) was a dead zone. Left centerback Forrest Lasso (and to an extent Ken Tribbett, who mostly played in the middle but also switched with Lasso a few times) prevented anything from being generated over there.

A multi-film room week! The first one dealt with a slight lapse in technique for a couple NSC players that helped result in Tampa Bay’s goal:

The only dangerous rebound position comes from a shot to the back post (or some sort of weird ricochet).

Meanwhile, look how much of the far post is given up here:

Pickens is over-protecting the near post, and giving up a lot of the face of goal, considering the shooter isn’t situated at an angle that opens up a lot of it naturally.

I love to be a soccer genius*, and have people who know much more than I do about the game agreeing with important points I make.

*I am not a soccer genius

The week’s second film room looked at the build for Belmar’s game winner, with an emphasis on how Nashville specifically tried to draw Tampa out of its defensive shell and then punish the Rowdies for it.

This is something Bourgeois and Belmar were looking for after noticing Oduro had tipped it earlier in the match. You can see that Belmar recognized the play was available early as it unfolded. Here – before Lasso has even received it from Tribbett – he’s calling for Nashville to swing it to Bourgeois.

“As they were pushing forward, we kind of saw that their midfielders liked to come forward, but defensively trying to track from that midfield space in behind,” Bourgeois said. “We kind of knew we could take advantage of that. I kind of saw a gap about five-ish minutes before that, and I knew with Belmar’s fresh legs, we could try and get behind.”

It’s a perfectly scripted play to achieve exactly that.

Finally, a FULL GIFENING for the first time in a few weeks. I love all my children equally, but this is one of my two favorites:

(The other is the header image for that post).

NSC official site game story. Moloto was voted Man of the Match – the voting for which came before the game-winning goal, as is tradition. The club’s story on Smith’s tactical tinkering. Bourgeois’s defensive effort and assist (and, in my heart, the dribble GIFed above) earned him a spot on the USL team of the week.