It was an extremely chalk-ish weekend in the East, with even the upsets (such as they were) having only minimal impact on the order of the teams.

Nashville over Tampa brought the top five closer together, but those teams were already similar enough in the ratings that the ranking order didn’t change (with Pittsburgh’s win over Ottawa keeping the Hounds between those two sides). Loudoun’s win over North Carolina wasn’t enough to bump NCFC down (again, with Ottawa’s loss helping out), though it did shake things up just a bit near the bottom of the table.

Let’s pop down there for a sec, because we’re getting pretty close to knowing who will and will not have the chance to make a late-season run. Saint Louis, Bethlehem, Loudoun (all helped by wins, though only Loudon’s came as any surprise) probably still have an outside shot at that No. 10 position with a good run of form to end the year. Birmingham and Loudoun did that group a solid with mid-week draws against members of it. Meanwhile, the teams below them are pretty locked-in. The order may change (Atlanta is probably the worst overall team in the East, but capable of playing well in fits and starts, while Hartford plays some decent ball lately, but dug itself such a massive hole early in the year), but those guys and Memphis are probably the bottom four.

Back to the top! Indy and Pittsburgh have played fewer games than the teams around them so there’s a wider range of potential variation in where their final point totals end up. Nashville and NCFC have the most games played, so they’re less variable (it’s not clinched by any stretch, but it’s reasonable to say NCFC’s dreams of an conference semi playoff game are approaching kaput).

While the East continues its boring track, the West is back to being the Wild, Wild version thereof, y’all. I had to include two graphical representations of the table (with the second a zoomed-in middle of the pack) just so you could see what’s going on in the important part: Nos. 4-13 are still separated by less than eight points… that’s hosting a second round playoff game and not even sniffing the playoffs separated by about one good week of action for any given team.

Austin took care of business against Rio Grande Valley last night, or it could have been even wilder, but as things stand, Bold FC is in position to try to make a run at Reno for the “avoid Phoenix in the conference semis” spot, thanks to both Fresno and Reno giving up ground (losses to Tulsa and Reno, two teams who didn’t move into playoff projections despite those massive wins!).

Orange County was a big riser and New Mexico a big faller not because of some incredible upset, but rather because the standings are really tight in that range. Same with LA Galaxy’s rise (though they passed fewer teams, and Sacramento Republic fell below fewer).

San Antonio… wyd. After a solid several-week run to turn from one of the more-disappointing USL teams into a safe-ish playoff side (as safe as the volatility over here allows), they got smacked by Tacoma Defiance. The margin of victory isn’t taken into account in this ratings, fortunately for SAFC, but this also wasn’t a full Tacoma Sounders-type team, either. They just got blasted by a mediocre-to-poor side.

With a 5-1 win, Tacoma is no longer the worst team in all USL! Atlanta United takes over the ignominious distinction (and they’ve probably been the worst for a while, in all practical terms).

There were a lot of shakeups around the USL with some major swings. Pittsburgh’s win over Ottawa wasn’t a big deal… except when you take into account that it was a 4-0 blasting. Loudoun’s win over North Carolina FC was going to be a big deal either way, but it also ended with a 4-0 margin.

There’s enough stratification between teams – especially at this point in the season, where one individual game represents like 4% of the résumé – that the movements can include a major change in the power rating without too many positions shifting in the rankings. Despite a huge loss, for example, North Carolina is still really far from the next spot down, since Fresno is far behind them in the raw numbers.

Orange County moves up and New Mexico down for the aforementioned result between them, while RGV’s drop by four spots for losing by three to Austin (not a horrible result for a low-table team) is partially about congestion in that portion of the chart.

We’re starting to see a little bit more of settling in both conferences: 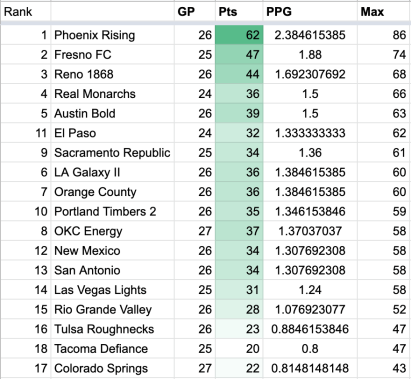 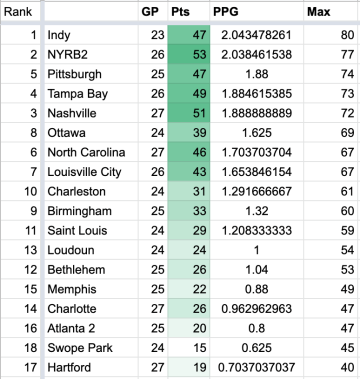 Phoenix punched its playoff ticket, while only Fresno and Reno join them as locks to finish outside last place (with Colorado guaranteed to finish behind them). That says a lot about how much better Phoenix is than the other teams at the top of the table, as well as just generally better than the rest of the conference.

It also says that the conference is pretty bunched up (you know, that thing I’ve spent much of this post describing). with even Tacoma still technically alive for the No. 2 spot out West.

In the East, we should see our first playoff clinchings this week, with both New York Red Bulls and Nashville possibilities with a win and a tiny bit of help on the out-of-town scoreboard. Indy has two games, and if both go well, they’re a possibility (though the best they can do this week is match NYRBII’s current 53 points, so they’d need more help around the East).