There were some big matchups in the East, but they mostly played out as expected (or weren’t enough of upsets to shake things up), so the standings all the way down to the teams that currently have a reasonable shot of making the playoffs – not writing off a run from Bethlehem, Charlotte or Loudoun just yet, but it’d take a major change in form – didn’t see any changes in teams’ positions.

We did see a fairly big mid-week upset, with Pittsburgh beating New York Red Bulls II (and though this ratings method is blind to location, it’s worth noting that came at MSU Soccer Park). The Baby Bulls had enough of a margin on the teams below them, though, that they didn’t get passed in the standings. That was aided, of course, by the Hounds turning around and losing (this method is also blind to margin of victory, but: by five freaking goals!) to North Carolina FC.

Things have gotten a little tighter in the pack behind the top two, then, and everyone down to No. 8 Louisville City looks like a reasonable bet to finish strong enough to get into the top four for that second-round playoff game. It remains most likely that two of the NYRBII/Pittsburgh/Nashville/NCFC group end up with Nos. 3 and 4, but you don’t have to squint too hard to see a way Ottawa or Louisville plays their way into it.

More editorializing than crunching the numbers here, but it’s worth noting we’re at about to the point where Louisville has turned it up the past couple years, en route to great regular-season marks and eventually USL titles. The team’s composition doesn’t lend itself to that as much this year (at least by the eyeball test), and they’ve played the second-easiest schedule in the East to date (without a run of home games to end the year, which can provide a boost to, say, Saint Louis or Nashville), but it’d still be unwise to think they can’t get something going to close the season.

It was finally time: With Phoenix beating No. 3 Reno 1868, the gap between Rising and the rest of the field was so great (more than 10 projected points! They’re now projected to cruise past FC Cincinnati’s points record from a year ago!) that I excised them from the top of the chart. They good.

There were small shifts down the table – though the top five remained the same as last week – and while there weren’t any wild swings (nobody moved more than a single spot), the bunched nature of positions 4-13 (less than a 10-point gap) means that basically nobody in that range is a lock to be in or out of the playoff field, and all of them could talk themselves into at least a first-round home game in the play-ins.

I had to give an additional decimal point to the numbers for Real Monarchs and Austin Bold, because they are in a virtual tie on projected points right now. That race – it’s worth noting that I just got done pointing out those teams aren’t competing only with each other – is for a home playoff game in the second round, too! The West has some really tight and interesting battles.

Of course, that also means that one week of simple expected results (OKC beating Portland in Portland was not that, San Antonio tying RGV was not that, New Mexico tying Los Dos in Albuquerque was not that) – or slightly crazier upsets – could either solidify the projected table as we enter the stretch run, or throw it into even greater chaos.

Rising does what it’s gonna do, while North Carolina makes a huge move on the basis of its 5-0 win over Pittsburgh. I’m a little wary that one game can make such a huge difference when they’ve played 23 others this year (especially given what the numbers don’t know: it was a 0-0 contest until a red card and penalty shot late in the first half, and the floodgates opened once the man advantage was at play), but at the same time, the margins between these teams aren’t huge.

One also has to take into account that Indy’s result this weekend was good-not-great – and in the top 10 or so that’s going to actually be a mark against the résumé you’ve put together so far – New York’s homefield advantage has been one of their big selling points and they sacrificed some of it by losing to Pittsburgh (you know, the team that NCFC beat by five goals a couple days later), so maybe I’ve talked myself out of being wary of it after all.

New Mexico loses a couple spots for drawing LA Galaxy 2 at home, Louisville a slight bump for a road win at Charleston, and so on and so forth.

The impressive mover down the table to me is Birmingham, which has been in a playoff position in the projected table for a couple weeks now, and has been chugging methodically toward that for even longer, but the Pure Power numbers hadn’t really taken note. A 1-0 road win against Memphis (especially the way Memphis has been playing lately) is hardly the most impressive win of the year, but it does start to bring results and power ratings more in line with each other, and Birmingham seems to be deserving the results they’re getting to the numbers.

Hey, new section that I was going to add last week, but was running behind schedule. We’ve played enough games (67.6% of Eastern Conference schedule completed, 69.9% of the West schedule completed) that a few teams have played their way into a smaller set of possible outcomes based on current points and games left. 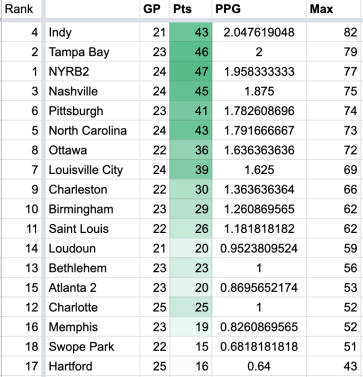 Ranks reflect current position in the table, but teams are sorted by maximum points possible.

As you can see in the East, Hartford is already at a spot where they can’t catch Red Bulls, Tampa, or Nashville. The best they can do is tie NCFC and Indy on the table (they’d win the tiebreaker because that’d mean Hartford wins out while those two lose out), and they’re one Pittsburgh win or Hartford loss away from not being able to catch the Riverhounds, either. The gap to 7/8 will necessitate a couple results going against Hartford because Louisville is only on 39 points, but Athletic is rapidly cruising toward playoff elimination with about seven games left to play.

In the West, Phoenix is so far ahead of the field that Rising has already clinched a finish in at least the top 15 positions in the Conference. Their next win or RGV’s next draw (RGV literally can’t catch them on tiebreakers already!) clinches another position. Obviously, it’s just an inexorable march to clinching the No. 1 overall seed – and they should do that with a handful of games remaining – but seeing the progress is going to be… like watching an Alabama football game against some middling SEC team. You know what’s coming, you watch the Tide slowly choke the life out of the game without breaking a sweat. Except “the game” is “the standings.”

No other positions are clinched in the West yet, though. Next Fresno win combined with dropped points for Colorado/Tulsa would mean those teams can’t catch the Foxes, clinching that the best they could do would be third, and even that would require a likely-impossible set of results going their way to get there.

The end of the regular season is sneaking up faster than it seems.