Welcome to The Graphical, wherein I mine the Opta data for pictures or stats that help tell the story of Nashville SC games. Today, it’s the week-old Bethlehem Steel game as I continue trying to play catch-up after an intense period with a lot of games… that is still ongoing.

As I’ve mentioned several times since the contest, Bethlehem played an extremely conservative game. Their goal wasn’t to win, it was to make sure Nashville didn’t. That comes off as an insult, but I don’t intend it that way: Brendan Burke knew that he could play for a draw and hopefully escape with a point, or play to win and probably earn zero points. He did the one that was in the best interests of his side.

A few different graphs bear out the conservatism. For example, take a look at the players’ respective average positions:

All of TWO(!) Steel players were in aggressive enough spots that their average position was across the midway line. Meanwhile five of Nashville’s starters averaged being in Bethlehem territory, with Bolu Akinyode (30) possibly across the line, while Taylor Washington (23) and Ken Tribbett (6) were close enough that their circles at least touch it on the graphic.

I was actually going to cut out the menu bar when making the graphic, but I decided it actually underscores the point here. When you remove Nashville’s touches, a tilted field gets even more heavily tilted in the direction of Bethlehem’s goal.

It also gets a whole lot less red, indicating that Bethlehem wasn’t doing a whole lot of anything with or without the ball. One to underscore the lack of offensive ideas or execution? Here’s their pass map on the Nashville half of the field: 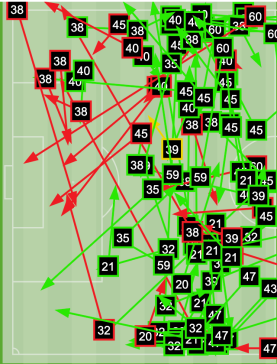 Bad enough that it’s only 60-some passes. It’s much, much worse that they had one (1) successful pass into Nashville’s penalty area, one (1) key pass – yellow No. 39 in the middle there – all game, etc. etc.

Again, it’s important to emphasize how there’s no shame in playing for the draw as long as you successfully do so. Bethlehem definitely did just that, and if I’d trimmed the timeline on some of these graphics to just the second half (when they played even more conservatively with the finish line in sight), it’d be even more stark.

From a Nashville perspective, it’s frustrating but there’s not much you can do aside from taking the single point in the standings and moving along.

Beating the back five

Bethlehem has almost exclusively played with four defenders in front of their keeper this season – it’s the tactical approach by their parent club, the Philadelphia Union, and the purpose of the Steel is first and foremost to prepare talent to move up to Philly – but played with five in this game.

When Nashville has gone with an odd backline, it’s typically more of a three-man backline with outside players who are focused on being involved both in the offense and in tracking back for defensive cover. Bethlehem went with pure defensive intentions for the outside backs (even though right back Issa Rayyan has experience playing higher up the pitch this year).

As we’ve seen in the past when this happens, that means Nashville’s offense is going to rely on a lot of hopeful crossing of the ball. And lo, it came to pass: 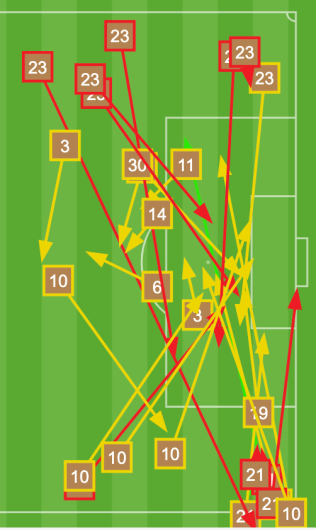 There are two items of interest for me here: first, the players doing most of the crossing were fullbacks Taylor Washington and Darnell King (the offensive midfielders have a few in the graphic, but many of those were from set pieces, not the run of play). Secondly, a lot of the crossing was successful.

Certainly there are some downers at the top of the screen from Washington, but most of those at the very least got into dangerous areas – one was blocked as he booted it, one went off the side of his foot and missed everybody out of bounds on the opposite sideline – and of the three he completed, all went down as key passes. That is, they led directly to a shot.

In fact, Nashville only had one successful cross all evening (you can barely see the green arrow underneath some of the other attempts) that didn’t result directly in a shot for the Boys in Gold. Crossing is generally considered poor offense for reasons I’ve expressed many times in this space. But other than “finishing is difficult even when you do get a shot off” (which was obviously a major culprit on this evening), the others didn’t really come into play a whole lot.

It stunk, but it just wasn’t Nashville’s night. Even against an opponent playing for the draw, they were able to generate offense and were probably unlucky to never find a winner.

Your mileage may vary as to whether it’s luck or finishing skill, but Nashville had a ton of scoring opportunities, and didn’t manage to put any of them in. That included two(!) goal-line clearances by Bethlehem, one an insane bicycle kick that grazed the bottom of the crossbar and the other a potential handball with an extremely inconvenient blocked view on the broadcast angles.

Look at the dangerous positions of these shots, too:

That’s 11 shots inside the box, and the eight outside the box were from realistic scoring positions (though the fact that four of those were blocked a good distance from goal could say something about room for improvement in decision-making on the night).

To me, the team that’s second in the East in scoring and tied for seventh in the conference in conversion rate doesn’t have a systemic problem here, just a bad night against a team hell-bent on playing a defensive game. That doesn’t make it any less frustrating a result in isolation, but I wouldn’t sweat it in the grand scheme.

What do you see in the data? Poke around, and feel free to share your insights in the comments.