The bizarre circumstances of the last game against Bethlehem overshadowed what was ultimately a dominant win for Nashville. Can they repeat the feat at home?

A lot going on here in terms of shifting personnel: centerback Ben Ofeimu will be unavailable after a red card in last week’s game against Hartford Athletic (for two cautionable offenses), and midfielder Cole Turner is out for yellow card accumulation. Starting keeper Tomás Romero has departed the team to play college soccer at Georgetown. Centerback Mark McKenzie started the year mostly playing with the Philadelphia Union, but has been back with the Steel in recent weeks (though he didn’t make their matchday squad last weekend).

The Union seem to be even more “throw the available players in a pile and see who’s available” about their USL side than even most MLS teams that field a Championship squad, so there’s a good chance we’ll see even more rotation than the lack of available personnel would otherwise require.

Goalie Todd Morton was unable to see the field for Real Monarchs this year (their David Ochoa is one of the best in USL, and three other backups – but not Morton – had seen time behind him), and his first contest with the Steel didn’t go super-well: he was shelled against Hartford Athletic(!), giving up three goals while making eight saves. Not enough data on him, and the sheer number of shots allowed is informative to how bad the Steel’s defense was, but he certainly didn’t keep them in the game.

Without Ofeimu – and likely without McKenzie, since I think he’s hit his limit of USL affiliate loans for players on an MLS contract – the defense in front of Morton… will be very far from full-strength. That probably sticks Matt Real inside (he’s also on an MLS contract, but his loan to the Steel is full-season. Yay more MLS rules!), next to Jamoi Topey. The fullbacks are fairly solid, even though Real’s typical position is left back, they’re deeper there.

Turner’s unavailability makes the central midfield partner for James Chambers a little more questionable. I would bet we see a little more dedication to the diamond midfield they were trying to go for early in the year (to better prepare players in that system, given it’s been the Union’s go-to), and that means Chavany Willis at the top of the diamond. He only has eight key passes in over 1,400 (less than 0.5 per game), so he’s not an offense-conducting No. 10 so much as a box-to-box complement to the veteran Chambers’s midforcer role.

Zachary Zandi and Issa Rayyan can also play in that more advanced midfield role, but they’re more commonly used out wide, and given that Anthony Fontana is just two clean games away from having a yellow card removed from his record (he’s currently one card away from a suspension accumulation), having him rest and get out of suspension territory might be wise.

There’s been a little bit of rotation at the forward positions, with Faris Pemi Moumbagna the most-used player and also the most productive… with six goals and zero assists on the year. Rayyan has been up there recently (and scored a brace against New York Red Bulls II), but given that could be needed in midfield, either Shanyder Borgelin or Yomi Scintu to get the nod next to Faris. Michee Ngalina (an MLS-contract player who has almost exclusively been with the Steel this year) has been out with injury.

Bethlehem has been inconsistent from a results standpoint (which makes sense given the roster inconsistency). They’ve gained a couple projected points since last time these sides squared off, and although they’ve improved a bit defensively (we shall see if that persists with Romero’s departure, and of course the short-staffed backline in this one adds additional questions), their anemic offense is even worse than it was at that time.

Given the talent, they’re capable of beating anyone on a given day. Nashville has to avid overlooking a team with great players (or at least great prospects) even if they’re not playing particularly well.

“I think they call them ‘trap games’ over here, in England they’re ‘banana skins,'” Nashville coach Gary Smith said. “Wherever you are, they’re difficult games. It’s at the end of a tough week. We’re playing against a very talented group of players. It doesn’t matter who goes on the field. They’ve proved that their conveyor belt of development in Philadelphia is as good as most. Which means that at any given time, those players, if they click, if they’re in form, they’re more than capable of beating anyone, and they’ve proven that.”

They do like to generate their chances through the middle (no surprise, given the inherent narrowness of a diamond midfield, even if they’ve used that formation less in recent weeks), or on set pieces. Although James Chambers’s free kick against Nashville last time around was their only direct FK goal so far this year, teams with weaker run-of-play offenses are going to tend to hope for magic with an assisted free kick or corner kick.

Michael Reed’s injury really throws Nashville’s recent lineups for a loop. While he had a more minor injury earlier in the year, Nashville’s numbers were a bit better equipped to handle it in central midfield.

If Matt LaGrassa isn’t finally ready to return from his own injury, the midfield partner for Bolu Akinyode will be… Ken Tribbett? He wasn’t effective in that role in nearly a full 90 Wednesday evening (after moonlighting in it over the previous couple games), but maybe going into the contest with the knowledge that he’ll be in that role – and entering the game from the beginning, rather than after a horrific injury to his teammate – could see him tune it up a bit.

“I mean, it’s certainly a different position,” he said. “I’m not going up all the way, I’m not a forward. It’s still a defensive position. I’m still on that mind of defend first, but I have more responsibility going forward. I get on the ball a little bit more. I have to find certain passes and defend further up the field to kind of block our back four.”

Bradley Bourgeois was also drawn into a CDM role in spot duty earlier this year, and he could be a possibility.m Elsewhere in the lineup, I’d expect mostly the same guys we’ve been seeing, unless Reed’s injury is a game-changer for the tactics. Daniel Ríos continues his Golden Boot campaign against a fairly weak defense, Lebo Moloto has a chance to continue racking up assists, with Ropapa Mensah getting his chance to start with Kharlton Belmar coming off the bench.

At keeper, Matt Pickens could have finally taken an iron grip on the starting position after a consistent rotation through the first part of the year. Alternatively, this period of fixture congestion could really use a breather for a 37-year old keeper, and Connor Sparrow had an outstanding game against Bethlehem last time around. I’d bet we see the younger goalie for this one. 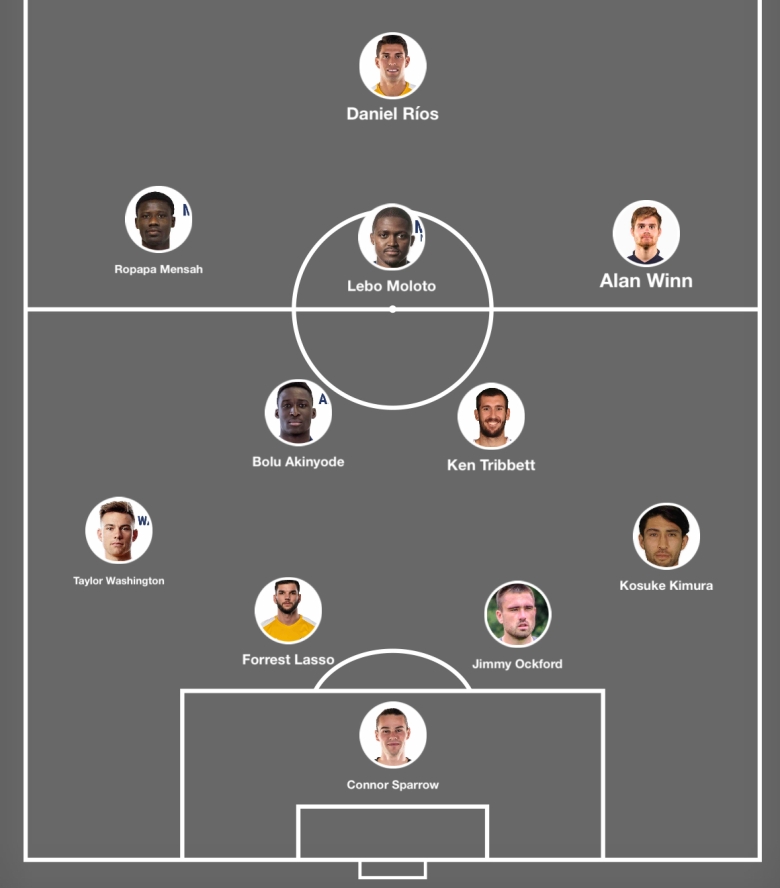 Whatever the lineup looks like, there’s no denying this team is in a run of good form.

“When you do get into a reasonable groove, I think the confidence that really sits inside everyone pregame is something that you can never replace as a coach,” Smith said. “It’s a feeling that the players have. They get that unbeatable sense within the way that they’re preparing and the way that they’re playing. On top of that, it becomes a habit. Then you expect it; then you’re achieving more. You think things are going your way, and you want it. It’s a great feeling, and you don’t want it to go away.”

It’s so hard to know what we’ll see from the Steel, particularly with the injury/MLS/disciplinary situations.