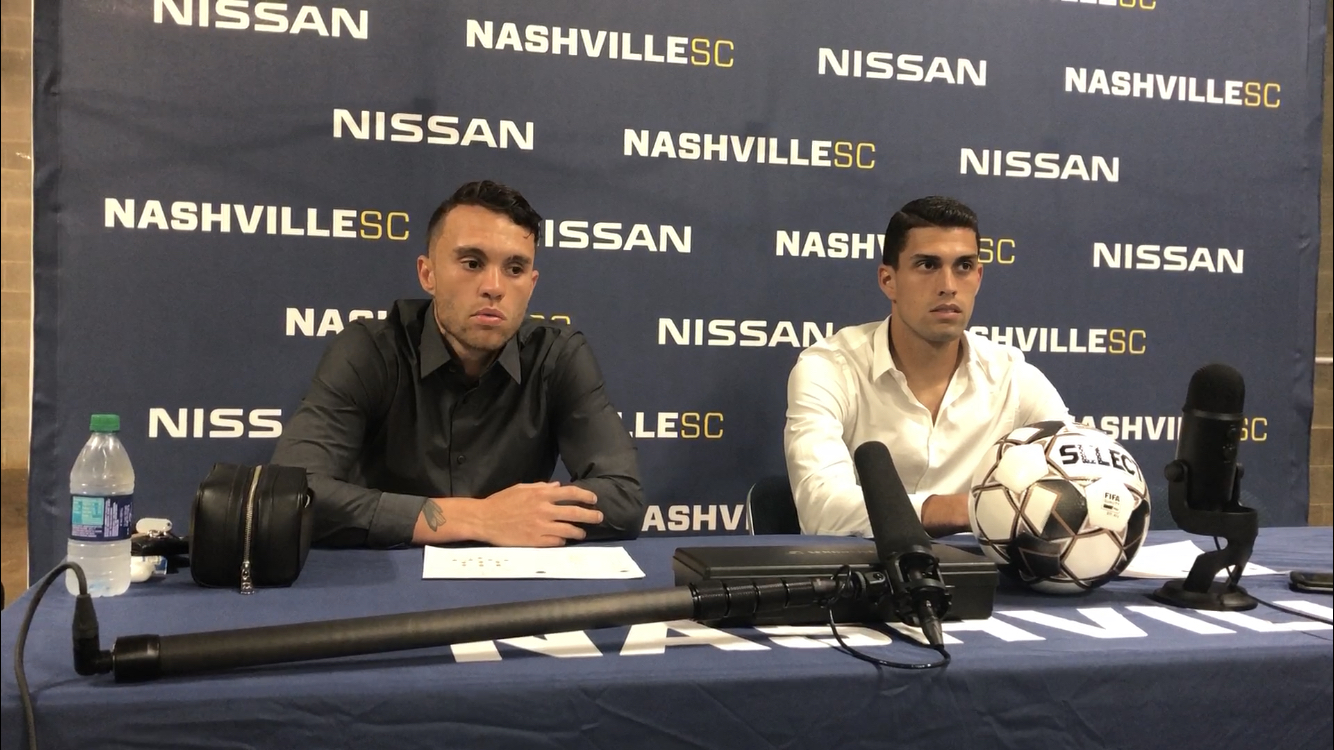 Watch and read what Nashville SC head coach Gary Smith and two of his goal-scorers said after tonight’s 3-3 draw against Ottawa Fury.

“I’m extremely pleased in the way that we attacked the game, and the opportunities that we created. I think over the course of a couple of games here at home, we’ve found it difficult to find ourselves in positive areas and look like a home team. Our goal-scoring opportunities and moments were, I felt, frequent enough to have won the game. But of course, bitterly disappointed in conceding three goals. What I will say is there are times when- certainly with a slight change of focus in the shape of the group, and also with bodies or a particular body in Ken who’s been extremely productive for us as a centerback – I do think that there are things we can improve. The past has seen us be difficult to play against and quite frugal in terms of conceding goals. We’ve now scored 10 goals in three games, but sadly we’re leaking too many. A victory that I felt was certainly somewhat we deserved, as we’ve missed out on.”

Why did Bradley sub on at half?

“There were a couple of things that I felt Bradley might just deal with a little bit better. We were getting ourselves in more positive areas higher up the field, and I just felt there were signs that it could be a little bit of an issue against a pacey front line that Ottawa havel There were some very good things that Liam did, and certainly in possession, as always, he was very thoughtful with the ball. It was purely a tactical move.”

What are the specific improvements the team needs to undergo?

“I think there’s been a huge emphasis – in fact I know there’s been a huge emphasis – within our work to be more productive going forward. But four games ago, we’ve had four away games, I was sitting here talking about how we’re going to dcreate more chances, how are we going to break teams down, and today has seen a much different mindset, and certainly productivity in the game. I’m delighted, of course, with the goals. Sometimes when you shift too far one way – which I believe we have – we’re now looking at the game in a very different light. There’s a lot of positive play, creative play, all three forwards have scored again, which I’;m so, so pleased about. But maybe the pendulum’s gone a little bit too far, and it’s cost us a game today. I do honestly think that – and I’ve said it before – that there are mindsets and moments in the game that I think definitely individuals when they look back at the way the game unfolded, will believe that they should have done better. The final goal is more than preventable – certainly in that midfield area. It’s all part of each challenge that is presented here. There were lots and lots of good things tonight, certainly the goals against were not.”

How did the team adjust to the pressure of believing that the home team should dictate play after a long road stretch?

“The second goal reminded of one or two we’ve conceded where it was a counter-punch, which has to be down to a lack of focus. A long, rangy ball in behind the back line that leaves us exposed, and listen, the finish is exquisite. I mean, it’s a fabulous finish, so let’s not take anything away from the player there, but certainly preventable from our point of view. I was most disappointed with goals 1 and 3. Free kick given away three minutes before halftime, there were plenty of things that went on before the free kick actually was given. And that, for me, is all about the appreciation of the moment in a game, the management of the game. We’re in a good place, we’ve created enough chances to have been probably in a better spot than we were. But, we should go in 1-nil up and I think the mindset of the opposing team’s very different. I’ve been there myself: you score a late goal and suddenly you’re invigorated, you feel the game is there for you to go and maybe attack a little bit more. And certainly for a team that possesses the ball as well as them, it gave them a shot in the arm. And goal three, late on in the game, especially after coming back from being 2-1 down, you know, it’s far too soft. Where the goal is – the strike is –
from, and the lack of pressure on the ball, and just the general feel about seeing the game out. I know the players are better than that. There’s going to be some serious disappointments when they look at the footage again, because we should have won the game. We got ourselves in a good enough spot to win it.”

How much does the availability and fitness of Ropapa Mensah and Cameron Lancaster boost the offense?

“You’ve only got to look at their output. I think I said in the buildup to it, three out of the four forwards scored at the weekend, and three of them have scored again tonight. They’re as effective, they’re as bright and as positive as any forwards in the league. I would have to say I think they’re the best front line in the league. Have we always given them enough service? Hopefully we’re moving in that direction. Some of the delivery today was so much better than in the past. The build-up play, the connection between any of the front line and Lebo has been very, very good. The big conundrum now is sticking a finger in the dike and stopping as many goals as we’re conceding. I do think that’s a lot down to personality. There were many, many moments in that game that we should have been able to deal with a lot better than we did. That’s taking nothing away
from them, I thought they played ever so well. But against a side that normally out-possess most teams in the league, they pass the ball more than anyone else in the league: we’ve edged possession, we’ve built some terrific pressure, we’ve created some wonderful opportunities. In the end, it’s been the one thing that I think we’ve been fantastic at in the past, and up until now, that has let us down, and that’s our defending, not our attacking.”

How has the creativity of the offensive personnel evolved during this high-scoring stretch?

“I think the shape of the group has helped a little bit tonight. We do have some very creative players and effective players that I believe are finding a better rapport and understanding. I want to say that the guys are clinical – Cameron definitely because he’s only been on the field two or three minutes [before scoring] – but there are moments, certainly for Ropapa in the opening seconds of the game that if you’re clinical, we see that go in or certainly make the goalkeeper work. They’re easily forgotten when you score three goals. That’s not being critical of our guys; it’s just being realistic. Because goals, as we’ve seen, change games. I like the way that the group is looking: there’s a nice understanding, there’s a lot of confidence in the group that we’re going to score.
There’s just some work to be done at the moment structurally to prevent sides from staying in the game or at least thinking that they can get something out of the game.”

What do you carry over from tonight’s game to slow down New York Red Bulls II Wednesday?

“We’re not going to have an awful lot of time, practically, to work at this. I’ve seen this group keep many clean sheets and look very difficult to play against and break down. In many ways, it’s a little bit like scoring goals: there’s got to be an internal belief and a bit of pride in keeping that goal intact. There’s more that can be done. I think the guys have taken some great steps in the other direction and they’ve now stopped thinking about the bread and butter work, which has given them good results, certainly, in the past. I’m not in the habit of beating teams 4-3 and 5-4. Balance has always been the key to everything that I’ve worked on, and like I said, I think the pendulum swung a little bit too far one way. I’ve no doubt in my mind that all of the guys in that locker room have the right mentality to see games out. They’re just not locking in on that at the moment at the right times.”

How relieving is it to be scoring again after injury issues?

Lancaster: “It’s nice to get on a run again, and get back playing. Yeah, I’m glad I can score today, and help the team try and win – which we didn’t do tonight, which was very disappointing.”

What did you see on the Ottawa goal that ultiamtely led to the final score being a tie?

Lancaster: “I saw him chop, and then score an unbelievable goal. To be fair, they’ve had three unbelievable goals, and there’s not really too much that we could have done about it. Which is disappointing in itself, but that’s football.”

Daniel, you’re the league’s co-leader in scoring, what has allowed you to be so prolific?

Is it bittersweet to have high offensive output if it still results in a draw?