You’ll note I haven’t had time for the usual suite of content lately. Apologies! Can’t pass up a bit of a preview for the Nats, given how few they get to play. I’ll hopefully have the opportunity for a full preview of Tuesday’s Mexico game.

As a side note, I think it’s worth mentioning how the only World Cup holdovers all play in Europe, mostly in England or Spain.

Anyway, that’s a lot of dudes who played in a huge tournament a couple months ago, including a guy who’s one of the best scorers in the world, another who’s one of the best wingers in the world, perhaps the best keeper in the world right now… you get the point. This may not be a pure A-team, but it’s not scrubs. Lineup selection will be interesting – do we only see Neymar for a short time as a bit of fan service to those who are coming out mostly to catch a glimpse? – but there’s certainly a strong enough top-to-bottom group that even the bottom 11 from it would be a challenge.

Here’s the USMNT roster (this one I’m going to C&P from the US Soccer website for ease):

That’s the bones of an A-team for the 2022 World Cup cycle. You’re missing Christian Pulisic, obviously, and the likes of perhaps Jozy Altidore will factor at least into qualifying, if not the squad traveling to Qatar itself (and if not, it’ll likely be because Werder Bremen’s Josh Sargent – who is staying in Germany instead of coming stateside – is among the candidates to replace him), and others will rise and fall from first-team selection status. I would still bet on the majority of the group being from this roster. That’s what Sarachan has designed these call-ups to be, I would presume.

So who do I want to see this evening? From a selfish perspective, fewer of the stars tonight (so we’ll see them Tuesday in a game in Nashville, that many of this site’s readers will be at in-person, and of course one that probably is more meaningful as a rivalry game, even if it’s just a friendly).

We do know that John Brooks is headed back to Germany tomorrow, so the top CB pairing of the future – Brooks and Miazga – would be my choice in central defense, given that it won’t have the opportunity to play together on Tuesday. Even though this isn’t a confidence-building opponent, I’d like to see Ethan Horvath get a chance between the pipes, since I’m still high on him despite club struggles and a major blunder in the Portugal friendly last November. The forwards are basically interchangeable to me at this point (though obviously youth service is more helpful to the long-term than the same old guys continuing to get playing time).

Here’s a guess/hope in the 4-1-4-1 that’s been the primary choice of interim manager Dave Sarachan: 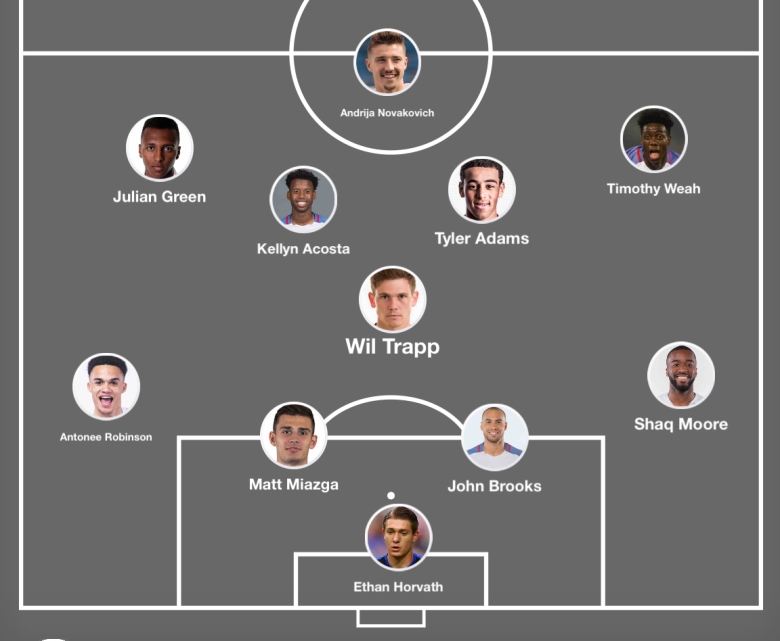 This gets Miazga/Brooks on the field together since they can’t do that Tuesday, and saves the likes of Zack Steffen, DeAndre Yedlin, Weston McKennie, Christian Roldan, and Bobby Wood for a competitive match against Mexico.

This is obviously not the lineup we’ll ultimately see (and of course there will be liberal substituting unless Sarachan’s semi-annoying tendency to keep guys out there to try for the win rather than letting others get off the bench comes into play in a close game), but It’s sure make me happy.