Welcome to The Graphical, in which I mine the Opta data for insights as to how Nashville SC’s most recent result came about. You can also see more conventional game coverage from the North Carolina FC win here at For Club and Country, and don’t forget to vote in community player ratings before tomorrow’s deadline.

Bend until they break

At halftime, this game felt like it had a lot of scoring in it, even if neither side was able to find twine before the break. As the second half wore on, it increasingly felt like one of those games, with tons of chances but never the one that pays off.

Indeed, up until the final kick of the game, it looked like chance after chance would be left wanting. Plenty in the pressbox had to scrap game stories mentioning it. But was it accurate? In a word, yes: 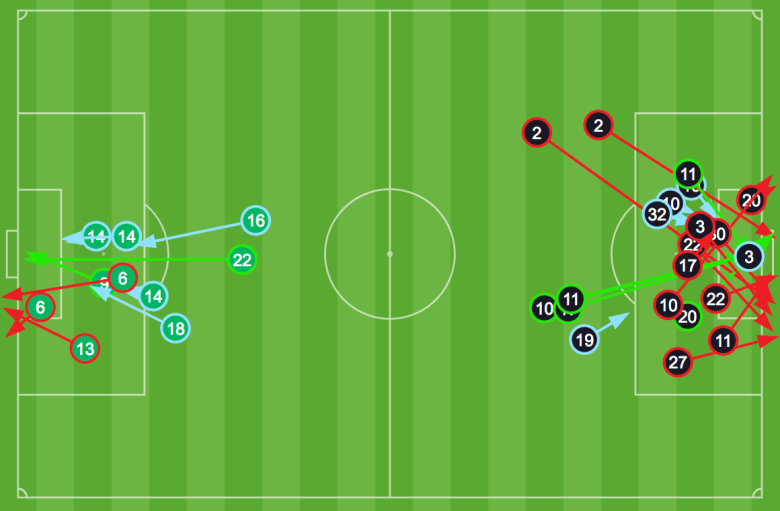 Look at all those chances for Nashville (right side), and indeed, a fair number for NCFC – though five of their ten chances were blocked, and only two of the others were on-frame. It’s not that neither team threatened, but rather that both threatened a lot and couldn’t perform the final action.

This was a bit of a throwback to the beginning of the year, when Nashville would consistently threaten, but just couldn’t score. Of course, I consistently noted then (and it’s since borne out) that creating those chances time and again is eventually going to pay off: even a poor finisher is going to hit the back of the net given enough chances, and all indications were then (and are now), that NSC’s finishers aren’t bad – just intermittently unlucky.

Still, eleven shots off the frame of the goal (nine of those from inside the 18, three inside the six-yard box) is not super-great. I’d contend, based both on recent history and the nature of some of those misses – if I recall correctly, two of the three inside the box were from set pieces, one from a cross that was barely touched by Matt LaGrassa as he slid to the endline – that you’d more likely see a three- or four-goal output in the exact same circumstances. I wish we had full Opta xG data for USL contests, because the chart alone looks like a 3.8-0.4 type of margin.

For what it’s worth, North Carolina FC’s on-target percentage was much worse (20%) than what felt like a poor day for Nashville (28.6%).

It would be unfair to say NCFC’s only chances came on the counter or set pieces, because they had a bit of decent possession and chain-building. However, it is totally fair to say that the majority of the play took place in their defensive end of the pitch. Nashville dominated possession (67.6% to 32.4%), and had plenty of that possession in the attacking third.

In addition to the heavily populated shot chart above, look at each team’s clearances: 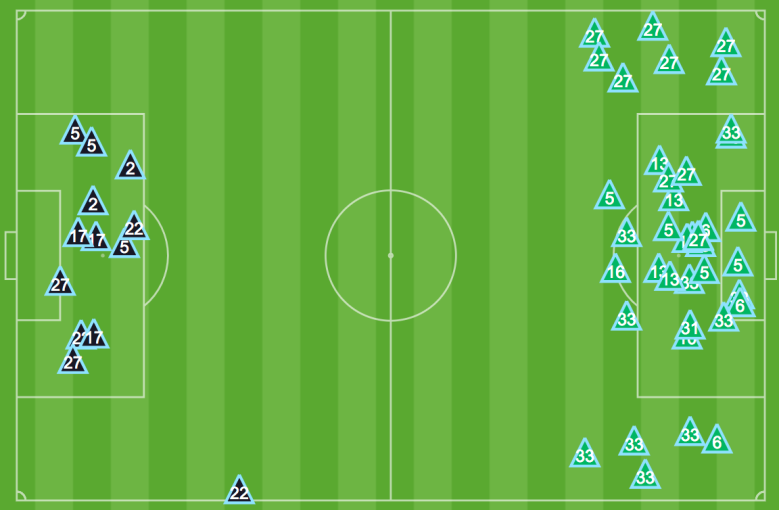 This was a dominating game in every way except the scoreboard. We all know soccer, of course: dominating doesn’t always mean you win. But more often than not, you play like this and get a result.

More like “W”Ish Jome had been here a little earlier, folks

The paths of Nashville SC’s two newest signings in terms of their integration into the squad have been divergent. Brandon Allen slotted in immediately, and put up goals like he’d never played anywhere else (before fading slightly in the past week-plus). Ish Jome has received steadily increasing time, and has gone from looking a little uncomfortable in his passing relationships with teammates to a potential breakout star.

He was outstanding in this one, certainly his best game in Gold – and likely to earn MOTM honors I’m finished with the community ratings. 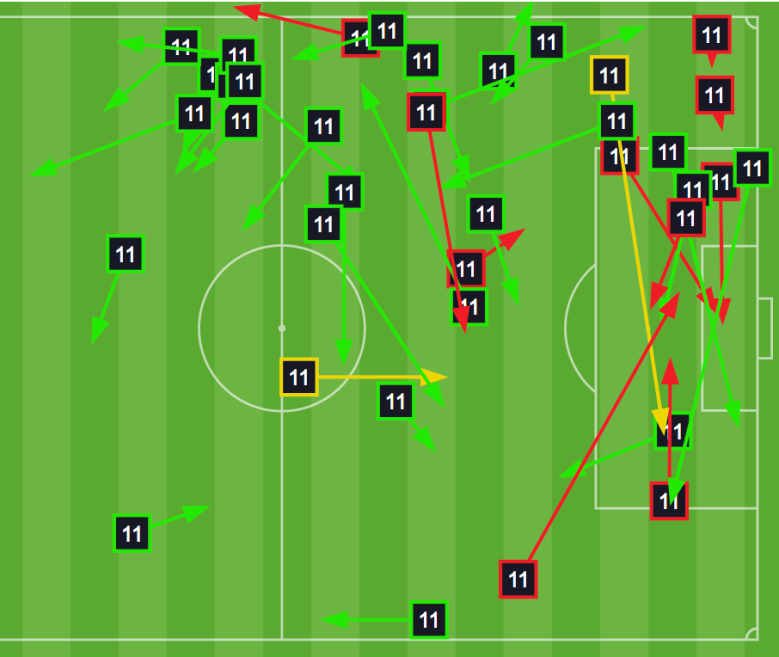 Look at that passing chart: he completed 83.3% of his passes, and all but two of his ten incompletions were attempted crosses (a high-risk strategy that you’re not too upset to see fail, because when it connections, they’re among the most dangerous offensive plays you can make).

It was his speed up the flank that drew the most attention, though. Take a look at this average position: 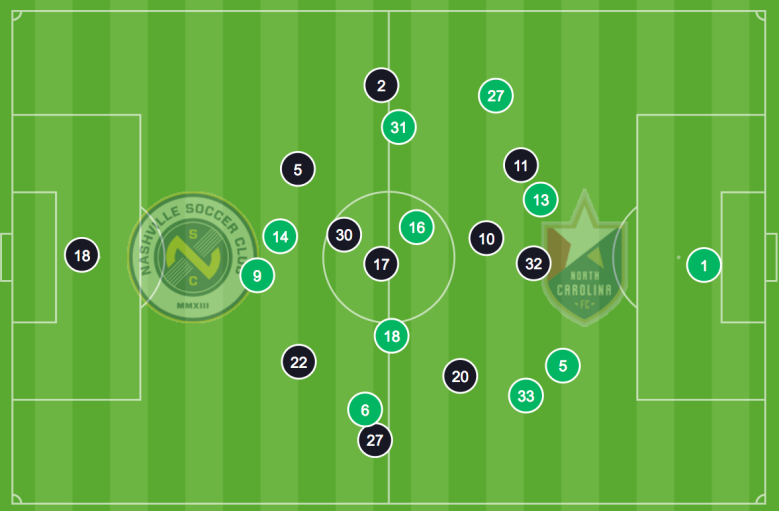 The left-right orientation is going to be a little skewed because he flipped over to the right side when Alan Winn came on (so his average is dragged over to the right, but it’s an optical illusion because the chart doesn’t separate the two positions he played).

More importantly though, look how high up the pitch he played both in that representation and his personal heatmap: 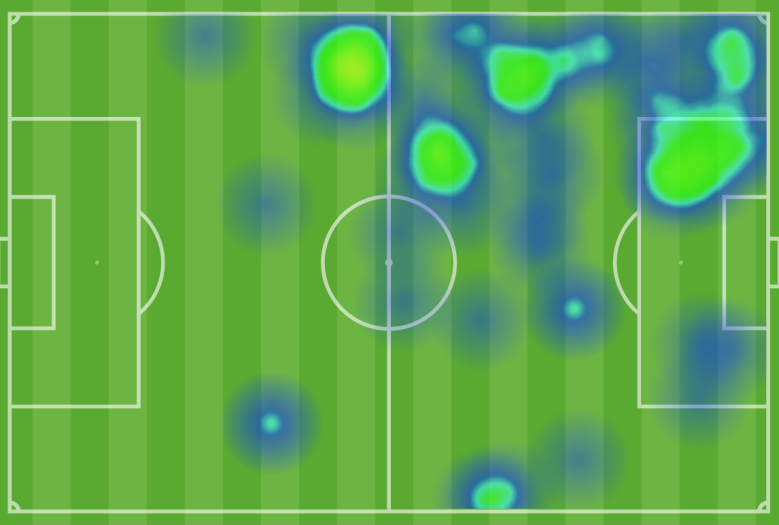 He was a terror getting down that left side, and as you saw just above, he banged in a bunch of crosses (four successful, five unsuccessful) when he got there. The dynamic of a lefty playing on the left and a righty playing on the right – versus flipping them, so the players can shoot with their natural foot in the center of the pitch – is something I’ve been watching lately. Justin Davis is certainly the most comfortable fullback overlapping his winger on the side, while Jome is the most comfortable winger getting high up the pitch without support.

Playing the wingers inverted so Jome can create speed down the right flank (if he’s comfortable enough dribbling on that side of the field) might be a better fit with Davis’s skillset (he can cross it to a striker or cut it back to a righty winger to shoot from near the top of the 18), since Kosuke Kimura isn’t overlapping as much on the right.

With the offense currently seeming tilted toward the left side, that might be something to look at. Jome provides that flexibility as he gets more comfortable with his teammates – he’s certainly a skilled and naturally talented player. To date, he only has one assist to show for it, but that will increase if he continues playing like he did Saturday night.

Thanks as always for reading FCAC. Please feel free to share our social media posts with a friend who is interested in learning about the team and reading in-depth coverage of Nashville SC.