There’s a bit less local rivalry on the line in tonight’s third-round US Open Cup match, but certainly there’s plenty of pride – and the chance to play an MLS side in two weeks – still at play.

PDL squad Mississippi Brilla heads north to Vanderbilt Soccer and Lacrosse Complex to take on the “big, bad” Boys in Gold before one or the other becomes an unquestioned underdog against an MLS team next round.

Teams: Missisippi Brilla FC (1-0-1 PDL Deep South Division, 1-1 victory on PKs over NPSL side New Orleans Jesters in USOC round one, 1-0 victory over USL side Indy Eleven in round two) v. Nashville SC (3-2-3 USL Eastern Conference, 2-0 win over PDL side Inter Nashville FC in USOC round two).
Time, Location: 7:30 p.m. CDT  • Vanderbilt Soccer and Lacrosse Complex
Event: US Open Cup Third Round
Weather: 80ºF, 15% chance of rain, 5 MPH NE winds
Watch: Tickets available • Stream on the US Soccer website
Events: Tailgate with The Assembly at Hurry Back, The Roadies at the parking lots surrounding the stadium.
Follow: @NashvilleSC, @msbrillafc, @ClubCountryUSA, Live stats
Etc.: Why is the game important? Learn about the US Open Cup. Gary Smith touched on the importance of the next game after last week’s win. My scouting report on Brilla.
Elsewhere: Official site preview. Golden Goal game preview.

So. Sometimes it’s hard to reconcile the eyeball test “doesn’t have the horses to run with a USL team” with “beat a USL teal last week,” and it will not shock you to know that even watching that upset doesn’t really help much in that regard. Indy Eleven bossed the game to the tune of a nearly 60/40 advantage in possession but couldn’t find the back of the net, while Brilla had a counter-attacking surge lead to a set piece and the only tally in the contest.

Brilla is a solid team defensively, and doesn’t pack much attacking punch. While Indy played the majority of its defensive starters (mainly on account of lack of depth), their backups filtered in heavily up front, and that crew was… not good. Indy had eight shots, six of them inside the box, and managed to put only one on-target. Meanwhile, Brilla’s only on-target shot among their five in the game came off the foot of an unmarked player for the goal.

I guess what I’m trying to say is that reading too much into the scoreline of the Indy game, rather than how it came about is a little misleading as to the type of team Nashville SC will play this evening. They’re a very solid side; they’re still one that Indy should have done much better against (and the Eleven realized it a little too late, subbing on starting strikers Soony Saad and Jack McInerney in the 70th minute).

I like some of their talent, and a few of the guys on this squad will probably be pros after their respective college careers end. This is also an experienced group, returning most of its stars from last year. Nashville needs to worry about the team pushing forward to the wings and crossing the ball in (as well as cutting it in with the wing midfielders), and more importantly, earning chances.

Brilla does tend to allow a big gap to open up between the midifielders and the backline, and given that’s where some of NSC’s best creative players thrive, there may be an opportunity to create some offense.

So, what sort of lineup will we see this evening? I was a little surprised with what we saw last week, particularly a banged-up Alan Winn seeing the field rather than resting. That speaks to the staff’s understanding of the importance of advancing in the US Open Cup, and we will almost certainly see the same philosophy this evening. Getting to the next round is paramount, and the lineup will be chosen accordingly.

Given the strengths (and weaknesses) of Brilla, going with a strong group on offense is of even more important. That’s where it’ll be interesting to see if new signing Brandon Allen figures in. He’s new to the squad, yes, but a guy who just goes out and gets goals is a good fit not just for this NSC team’s current weaknesses, but also the matchup against a solid Brilla defense.

The 4-3-3 lineup last week was also something of a surprise, but with Allen in the middle, doesn’t it make sense yet again? It prevents Brilla from moving the ball from central midfield to the wings, presumably doesn’t affect Nashville by pushing too many numbers forward (with the wingers and striker having more limited offense roles), and should allow for the strengths of the players to shine. With a new left winger signed, it’s also a good way to get Ish Jome involved

I’m also interested to see the backline, which is one man shorter after David Edgar’s departure from the team. He was not in the 18 against Inter, but without him, there’s less depth overall anyway. That impacts not just this game, but the regular-season match at the weekend against Charleston Battery. Can London Woodberry go 90 yet? If not, at least one centerback is likely to have to play significant minutes twice in the span of four days this week.

This is a little different than last week for Brilla, because the game is away from home – and a six-hour bus ride, no less – so some of the comfort they had against Indy might not be there. Of course, it will likely be supplanted by the excitement of potentially earning a second upset win in a row.

The winner of this one will advance to take on an MLS side in Round Four of the US Open Cup. Who will it be? There’s no way to know until the games are played (they’re paired geographically). However, the MLS teams in reasonable proximity to Nashville and/or Clinton, Miss. are:

Not a ton of options other than Atlanta for both, Columbus for Nashville, and the Texas teams for Brilla. Other games that affect the choice here:

So the verdict? If Nashville wins, it almost certainly gets Atlanta United. If Brilla wins… probably Atlanta United anyway? Not sure where Charleston Battery would be shoved in that event, but there’s not a whole lot of good options for Brilla here.

I’m going with basically what Brilla has done in each game this year for them. I’m a little in the dark on Nashville, given the major tactical changeup we saw last week (and I could reasonably see a few other tactical options here – including a return to the 5-3-2 – tonight). I’m going to stick with the 4-3-3 that we saw, some of the same personnel we saw, and both new signings making their debuts. 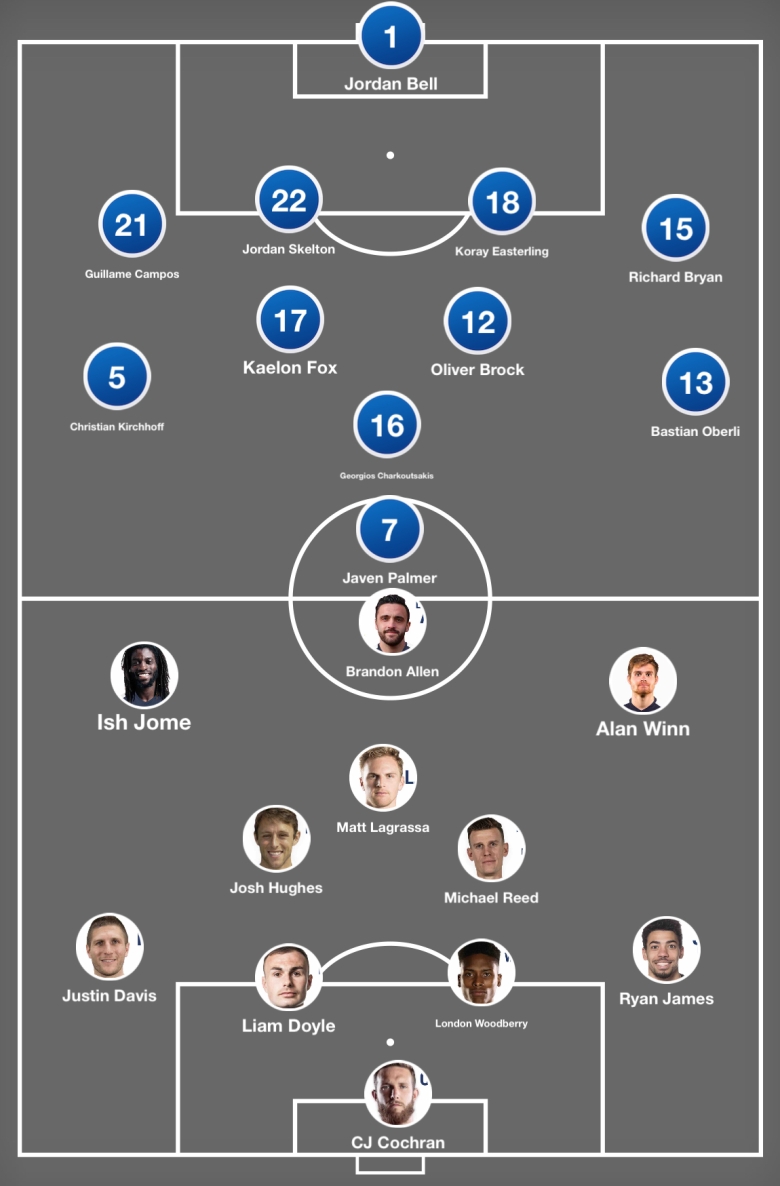 Jome (who’s been everywhere in his career, including forward, wingback in a 5-3-2, etc.) on his natural left side, playmaker Alan Winn on the right, Allen up front to get those goals. Some shakeup in personnel to keep guys fresh, but mostly the same in the back eight.

As I’ve said a couple times above, I think Brilla is a good team, but probably shouldn’t have been good enough to beat Indy (they did anyway, and that’s a credit to them). Nashville isn’t going to roll them, but nor can they be overlooked.

Nashville SC wins 3-1. I hesitate to even assume Brilla gets a goal, because their offense was non-existent outside of the set piece in the victory over Indy, but I don’t think NSC yet has shown the killer instinct to win a game by three goals either (and certainly not with a non-first-XI squad).