Welcome to The Graphical, in which I mine the Opta data for insights as to how Nashville SC’s most recent result came about. You can also see more conventional game coverage from the New York draw here at For Club and Country.

Shoutout to Tyler Damme for pointing this out on Twitter: Nashville SC has trouble involving the center of the pitch moving the ball into the offensive zone. They improved in the second half Sunday afternoon, but still the heatmap shows some weakness there: 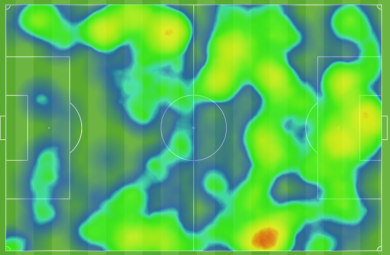 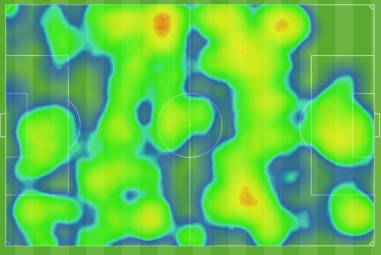 This plays out in such a way that NSC is relying on the two central midfielders – in this system, both defensive midfielders – or the defenders to get the ball wide to the wingers for a cross or diagonal run, or over the top to the strikers (in this game, that worked reasonably effectively to Ropapa Mensah).

This can be considered a problem, it can be considered part of the gameplan against an NYRBII team whose whole mission is to take away that area of the pitch in its 4-2-3-1, it can be considered an area for future improvement whichever it is. Of course, given that Nashville SC had one of its most productive, cohesive offensive games of the year, I don’t see it as too significant an issue. (And I do think NYRB’s tactics played a large role in the way the heatmap played out).

Still, there are a couple ways it can be improved, if that’s what Gary Smith wants to do. A couple potential personnel changes are available: replace one of Michael Reed or Bolu Akinyode with Matt LaGrassa, a player whose game involves more going forward with the ball at his feet. I’d say Akinyode is unquestionably the most defensive of the players at that position group, while Reed is somewhere between the other two (see: his crossbar striker against Indy Eleven, for example). LaGrassa is more comfortable transitioning to an offensive position with or without the ball, and has the added versatility of sliding out to the wing, something we’ve seen a tiny bit of from Reed, but no more from either he or Akinyode. Another personnel change could be to slide Moloto back into the midfield, and let a true striker or goal-getter replace him up top. He started the year there, and is comfortable in a distribution role.

There are also a couple tactical adjustments – though again, given the nature of NYRB’s structure and plan, I don’t think they were super-viable in this one. One is to send the fullbacks farther forward, while tucking the wingers in a little bit. The Red Bulls’ plan  is to press and counter though, so getting the FBs caught up the field could have been… problematic. Simply switching the wingers to inverted positions – putting lefty Taylor Washington on the right to cut in and shoot with his inside foot and righty Alan Winn on the left for the same cutting run – could allow slightly stouter play through midfield on the offensive end, since it likely reduces their tendency to stay floating on the outside (though without fullback support outside, could result in a bunched NYRB defense to an extent).

Another option would be to stack the strikers with Ropapa Mensah (or Michael Cox, or any other analogue) playing in a true advanced position with Moloto dropping deeper into a bit more of a false-nine role to collect the ball and bring it forward through the center of the pitch. There was some of this Sunday, though more in the counterpress posture trying to win the ball back than offensively. Bringing him far enough back to almost be playing more a 4-5-1 could be an option if Mensah is going to be as consistent as he was Sunday.

Overall, I see the issue, but believe it to have been more of a matchup-oriented tactic, rather than a structural problem to be addressed. It’s an interesting thought exercise, nonetheless.

You probably don’t need a graphic to show you that Sunday’s game was just fun. Nashville SC had lots of shots, and the majority of those were pretty good looks. 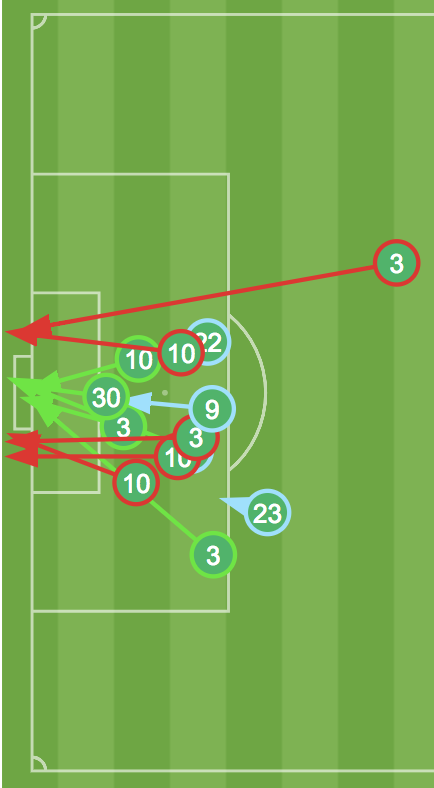 Aside from the one long-distance strike by Mensah (3, well outside the box), the shots Nashville took were from extremely dangerous positions. By the way, that Mensah blast was actually a decent look – NYRB committed an own-zone turnover, and the big Ghanaian first-touched it. The camera work was poor, but it may have actually even been on-target despite what the chart shows (NYRB’s keeper certainly thought it was, as he made a scrambling, diving save on it).

There was only one other shot outside the box, that a good one from Taylor Washington that he probably could have pulled the trigger on even sooner to prevent the last man between him and the keeper from getting a block in. Compare this to even a Penn FC game in which we were left lamenting “all those wasted opportunities.”

This is a whole heck of a lot more sparse.

It’s easy for me to say “the offense is improving, even if the final product isn’t there.” In fact, it could be a straight-up lie. The final piece being absent is a pretty darn important part of offensive execution and ultimately production. Still, Expected Goals (or xG) exist for a reason – because over the course of time, the average player is going to convert some of these opportunities into goals.

Regardless of whether or not Nashville is scoring more (they are, but only a little between the Penn and NYRBII games), having more opportunities, and more realistic opportunities, is going to pay off in the long run. The song-and-dance remains the same, to the point it’s something Gary Smith has had to address in press conferences.

His saying “they’ll come with more chances” is not coachspeak or excuse-making for his team. It’s an accurate representation of what the most likely outcome is over time. As NSC continues to up its chances, they get closer to a breakout game where they bury a few of them.

This goes along with the first two points: Nashville did a great job preventing New York Red Bulls II from bossing the game by forcing defensive-third turnovers with their high press. NYRBII using – and sticking to, in the face of results – that press played a large role in what felt like repeated NSC offensive rushes. Soccer fans can think of it like a basketball game: if the opponent (let’s call them “a college basketball team coached by Shaka Smart”) is going to press the whole time, there’s a good chance they force a lot of turnovers in your backcourt. On the possessions when they don’t force that turnover, though, they’re going to give up dunks.

Nashville’s numbers-advantage opportunities are the equivalent of those dunks (though unfortunately, too many of them ended up like these). NYRBII is generally OK with giving those up because they trust the opponent to miss the dunks or waste the opportunity, and it ends with a lot of steals of their own, leading to offensive opportunities their way.

That’s all to say, they want the map below – their defensive actions all over the field – to be heavily concentrated in Nashville’s defensive end (on the right), so that they get instant offense out of taking the ball away. 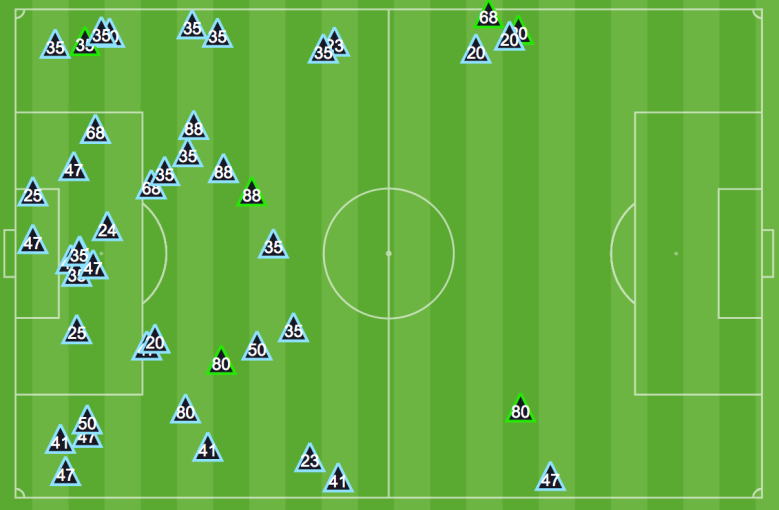 It, uh, is not. Contrast that with their map against Ottawa (who, to be fair, is one of the USL’s worst teams, so preferably not a close comparison for NSC. Still, their mid-week game ended in a draw, as well). Take note, they’re going in the opposite direction, so NYRB’s offensive end is to the left: 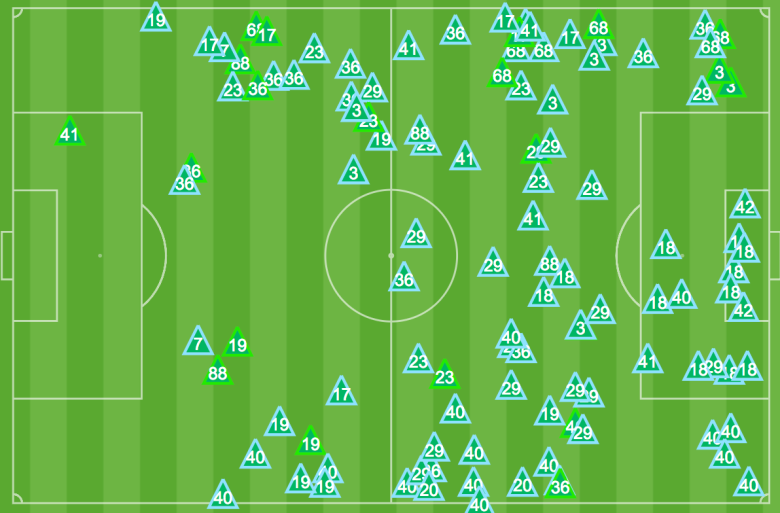 That’s a whole heck of a lot more (also many more in their own defensive end, but the field was still tilted more in their offensive direction in terms of taking over the ball). Nashville’s gameplan neutralized that of NYRBII.

That is to say, Nashville played the role of Michigan in breaking the press in this NCAA Tournament game. They just didn’t finish the shots. If both teams were to come out with the same gameplan next time they meet – not that I’m expecting it, necessarily – it wouldn’t surprise to see NSC finish four or five times in First Tennessee Park.

Obviously, Ropapa Mensah’s multiple runs in on goal, his goal that did count and the impressive one that didn’t are all indicative of what is likely his best-ever game:

He was also involved all over the offensive end of the pitch, had just three incomplete passes and one failed dribble while creating instant offense on the takeaway, he was conservative when the situation called for it, and even ignoring the shots he took (five, three on target including the goal, one of the two off-target potentially a statistical error) he had a well-rounded game. 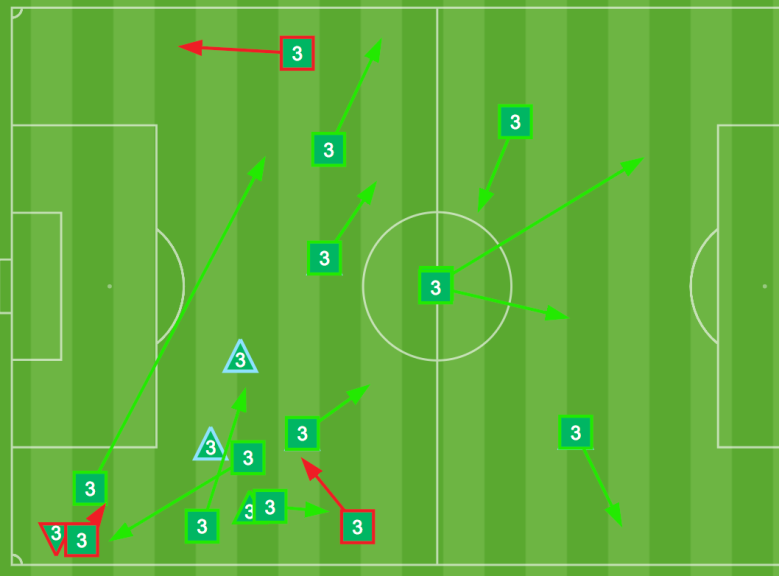 For a hold-up striker slash goal-scorer, that’s a heck of a productive performance. He can’t be that involved for 90 minutes every week (his only start-to-finish appearance this season came against Penn, and while he was effective, he was clearly gassed by the end), but he’s taking steps toward it, and doing more than just being a shooter. The goals are going to come for this team, and he’s going to be a major part of that.

Nashville has been one of the league’s best defenses to date in 2018 (five goals allowed in seven games, only Pittsburgh and Louisville are comparable in the East, with the Riverhounds aided by their schedule played). Against New York, they let in another goal, and the initial look at the shotmap looks scary: that’s a whole lot of action front-and-center:

Despite being in reasonable shooting positions, New York’s shots – other than the goal – were generally pretty poor. Indeed, they only had one other on-target. The distance and direction of key passes tells part of the story: these were guys trying to strike balls coming from reasonably long distances. So too does NSC’s defensive effort: five blocks by field players, only two shots (that were both off-target, the more dangerous taken by No. 23 at the bottom, courtesy of a beautiful through-ball and David Edgar getting wrong-footed) taken from inside the box and inside the width of the penalty circle. Other than blocked shots, the Red Bulls weren’t generating high-quality chances.

That speaks to the work done on- and off-ball defending by the Boys in Gold.