Nashville SC and Chattanooga FC are natural rivals, but the travels throughout the US league system will keep them apart for the time being after Nashville SC (then FC) left the NPSL following the 2016 season. However, they’ll face each other in a friendly this evening in Scenic City.

Amateur (non-university) sides are always a little more… fluid… in who’s on the team year-by-year, but fortunately, Chattanooga posted its roster just a couple days back:

ANNOUNCED: Here is the roster for Saturday’s matchup against @NashvilleSC. Starting lineup to be announced just before the 7:00 kickoff.

That’s a light squad – 17 players, just one short of a typical gameday roster, but in preseason when teams are making mass subs, you expect even more – so there’s not a ton of depth here.

Zeca is expected to be one of the team’s top goal-scorers at striker, and Perez and Clarke are solid scorers/offensive threats from the midfield. Defender Soren Yuhaschek is a dutch guy who played for Chattanooga head coach Bill Elliott at University of West Florida before joining CFC last year. 28-year old Spanish midfielder Juan Hernandez has been on the fringe of All-NPSL the past couple seasons, and has shoulder-length blonde hair (oh, the important information you learn from a player’s bio). Diminutive (5-6, 155) striker Felipe Oliveira was a big scorer for Elliott at West Florida, so he’s certainly one to keep an eye on.

With an amateur side, it’s pretty tough to know a whole lot of information on players’ past performances – they just don’t have the breadth of statistical and biographical stuff available due to the level at which these programs are staffed. However, “team that was good-not-great in the NPSL last year” shouldn’t pose a major threat to a good USL team.

Nashville has run out several different lineups in the past few weeks: primarily the starting XI against Atlanta United, Chicago Fire, and FC Cincinnati (and presumably Orlando City), with varying degrees of reserve lineups against Ottawa Fury and Lipscomb University.

Will we see the former or the latter this evening in Chattanooga? I went straight to the source to find out:

“If you look at last weekend, seven of the starters played 90 minutes against Cincinnati,” Gary Smith said. “That brought our senior group of players into a world where I’d be comfortable where if they were going to start the following week, or the first week of the season at Louisville, we’d be very happy. I certainly want to make sure as we close in on our opening game, that the players that I’ve got in my mind that might well be in that starting group all things being equal, are fresh, are sharp, are ready, are comfortable in their own skin in playing 90 minutes. I think all of those guys are.

“As we work towards this weekend, I want to make sure that the lads that haven’t had as much might get a few more minutes, but I also want to keep that continuity. There’ll be a little bit of a balancing act of trying to make sure that guys I’ve got in my mind for the following weekend – which I’ll obviously keep close to my chest – are ready, but also that should any eventuality happen, everyone’s in a good place for the opening game of the season.”

So, let’s read between the lines: no more than a cameo appearance for Lebo Moloto and Ryan James (who have played the most preseason minutes of anyone on the team), and you’re likely to see more of a reserve group with some starters mixed in, rather than a full Starting XI-caliber side. You will almost certainly see Chattanooga FC alumnus Jordan Dunstan in for the full 90, both because this is his former club and because he doesn’t figure heavily into the first team, so preseason reps are his only chance to get a full game in.

It’s clear that Smith wants to win this game, but that the priority is more aligned with trying to keep the team healthy (that probably means only limited minutes from guys who have had minor injuries in the preseason), and prepared for Louisville than going all-out for a victory.

Chattanooga is a total mystery with all their turnover, and quite frankly I don’t even know what sort of tactics they trotted out last year (thanks to watching Jordan Dunstan’s highlight when he signed with NSC, I remember it was a four-man backline).

Instead, I’ll focus on Nashville’s group, which probably looks something like this: 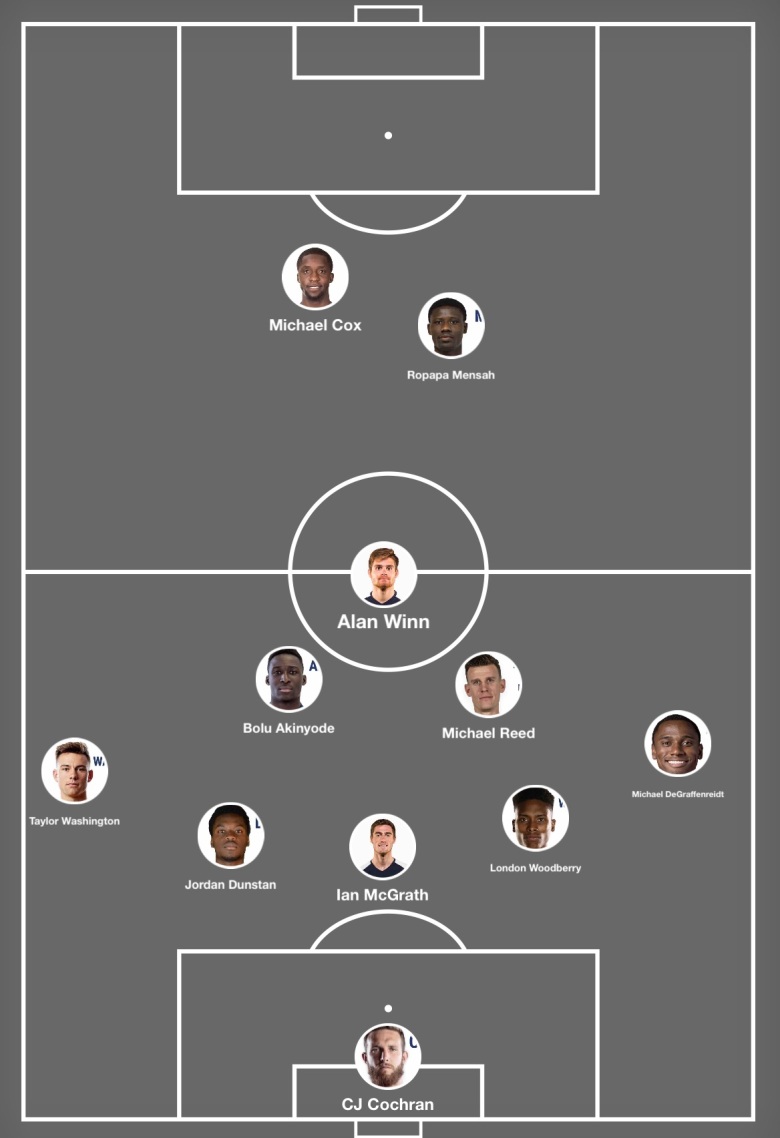 Why? I think you’ll see a bit of subbing to give players on both ends of the spectrum (more toward the starters and more toward deep reserves) on the pitch, but this gives guys who are going to be in the 18 but not necessarily the XI on a game-to-game basis to not only get minutes to stay sharp, but a bit of integration with some of the guys who they’d step onto the pitch with in a substitution situation.

It’s a common trope in a rivalry game (particularly one with teams from different tiers in a system) to say this is one side’s [Super Bowl, World Cup Final, etc.] and just another meaningless game to the other, but that seems to be relatively true here. Chattanooga’s… resentment… toward NSC may be more fan-centered than the actual opinions of the clubs, but it’s real nonetheless. Meanwhile, I can say with a degree of certainty that Nashville supporters have no love lost for CFC, but the coaches and players really don’t rate the rivalry at all.

The game ends in a 2-2 draw. There’s something to be said for the rivalry, and also something to be said for NSC not wanting to portray itself as any sort of big, bad bully to teams in the state (particularly at lower levels of the pyramid) before making the jump to MLS. Even if they had a chance to pour it on, I don’t think they would, thanks to their de facto role as a bit of a soccer ambassador. That allows the higher level of emotion from CFC to keep this one close.