The MLS trade window doesn’t open until Wednesday, but already the Boys in Gold have a move lined up. Per The Athletic‘s Sam Stejskal, a swap is in the works for New York Red Bulls winger Alex Muyl.

Sources: The New York Red Bulls and Nashville SC have agreed to a trade that will send midfielder Alex Muyl to Nashville. International slot for 2020 and 2021 part of the package NY receiving in return. Move won’t be official until MLS secondary transfer window opens Wednesday.

Nashville is very clearly uninterested in using its full allotment of international slots (one was also sent to LAFC as part of the package for Walker Zimmerman back in February, and they traded slots in exchanges for Daniel Lovitz and Adrian Zendejas before the turn of the calendar), so unloading one makes sense. There are three presently occupied – Randall Leal, Hany Mukhtar, and Miguel Nazarit – and three traded away, which means NSC still has two of its eight international slots available should they desire to use them.

With the business side of things (pending the financial terms) taken care of… what type of player is Muyl?

Per American Soccer Analysis’s G+ metric (and Eliot McKinley’s data visualization thereof), you’re looking at a disruptive defensive player who gets into good spots and moves the ball well to teammates, but doesn’t provide much in the way of dribbling or shooting:

Caveat: it's RBNY and they break all models. https://t.co/QDME3ybDjs pic.twitter.com/5WA5K82it9

As Eliot said, the nature of the Red Bull system – essentially unique within MLS – makes it tough to know how much of that production is Muyl-specific and how much is a product of playing in a relentless high-press, direct-play style. The interruption? Almost certainly the former. The passing and receiving? Maybe more up for debate.

Muyl’s passing numbers seem to be in line with other Red Bull wingers over the past few years (Red Bulls in red, all other MLS wingers in black): 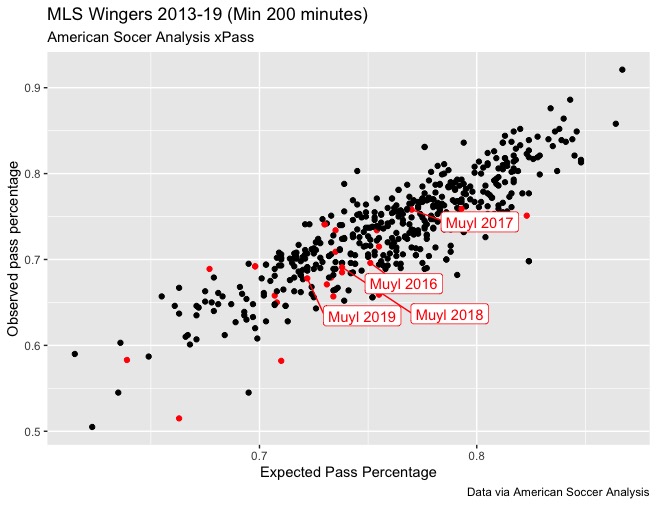 You can see that NYRB wingers do tend to be lower and lefter (both bad) than average. He’s perhaps a bit better than some of his compatriots, so I would read positively into the G+ score, without fully crunching every number. That the two most recent years – under Chris Armas – seem to see a fairly significant drop off in his expected passing numbers (and observed) may indicate that a system shift could see him bounce back. Or not!

The most recent full-season highlight reel available is from 2016, but here you go:

Muyl is a 24-year old with just over four years of professional experience under his belt, so there’s a good mix of youth and a lot of time on the pitch. He’s also a New York City native whose entire professional career has come with the club for which he was a homegrown signing (he also has three years of college at Georgetown to his name), so there’s definitely an element of taking him away from basically the only professional environment he’s ever known.

Assuming Nashville trades for his homegrown rights, this does give them the opportunity to go to a full 30-man roster (there’s a max of 28 non-Homegrowns available on the roster, with Derrick Jones currently occupying slot 29 with rights secured from the Philadelphia Union). To add a young winger with potential while effectively creating a new roster slot for him, rather than filling an existing roster slot, seems to be a savvy move by the front office.

A right-footed right winger, Muyl seems to serve in a similar role to a number of other players on the roster – David Accam, Abu Danladi, and Alan Winn are all right-footed and have played primarily right wing to date – though his versatility to play left wing or as a striker could be another route to the field. He can also provide a different style of play, having been raised in the high press of the Red Bull system, than the others, who are pure get-in-behind or one-v-one specialists.

More to come on Muyl when the signing is official.